For those of us who have spent a major part of our childhoods being glued to gaming consoles, here is some news to excite the child (or the adult video gamer) in you! Popular custom sneaker artist – Freaker Sneaks has recently unveiled an upcoming series of Super Nintendo inspired sneakers that dreamily combine the nostalgic appeal of the console with Nike’s Air Jordan basketball shoes.

Featuring retro tinged tongue tagging in a dominating grey color scheme (quite similar to that of the actual gaming console), the stylish sneakers also include the D-Pad and buttons emblazoned on the rear. And for giving it realistic feel, the tech pad and the colorful controls (in a quadruplet red, blue, green and yellow) are both extracted from an actual Super Nintendo controller! While the prices remain unknown, these custom shoes will reportedly be manufactured in a limited edition of only ten pairs. 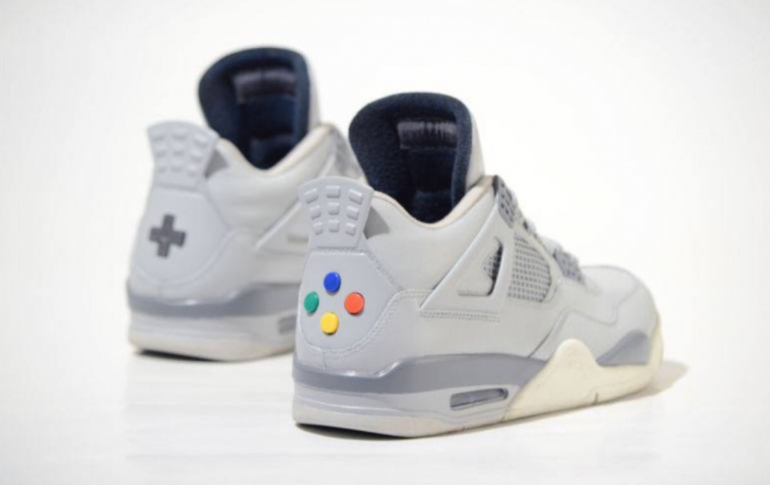 Based in Europe, Freaker Sneaks is a relatively new, yet popular custom shoe-making brand. Launched in 2004, the label has designed a number of popular sneakers in the past, including those themed after PlayStation 4, Street Fighter 2, Sonic The Hedgehog as well as the super popular Star Wars themed R2D2 and C3PO sneakers. On similar lines, Nintendo had also tied – up with Vans in the past for an 8-bit inspired shoe collection that featured games like Super Mario Bros., Donkey Kong, and The Legend of Zelda. Going back to the novel Nintendo sneakers, it they haven’t got you visibly nostalgic and super- excited already , what will?

Tags from the story
Sneakers