The female counterpart of the highly successful 1 Million fragrance for men, by Puig and Paco Rabanne was finally unveiled last week in Paris. Dubbed the Lady Million, this fragrance made its world debut at a special installation complete with vintage Paco Rabanne dresses, a gold-colored catwalk, and the signature 1 Million safes. Journalists at the launch event were treated to a mood film, which featured a montage of strong female actresses/characters, followed by a striking 3-D presentation of the bottle and name. Designed by trained sculptor Noé Duchaufour-Lawrence (who also made the 1 Million bottles), the Lady Million flacon comes complete with an engraved, golden cap. The famous Regent diamond inspired the design of the bottle that resembles a multi-faceted diamond. The metal cap serves as a symbol of the designer’s famous metal dresses.

The scent was a joint effort by IFF’s Anne Flipo, Béatrice Piquet, and Dominique Ropion. A scintillating fragrance opens to hints of neroli, bitter orange, and raspberry, building to a heart of orange flower absolute and Arabian jasmine absolute, atop a base of honey and patchouli. The fragrance took 19 months to create, and 2,500 different versions were tested before the right formula was reached. The face of the fragrance is model/actress Dree Hemingway.
An affordable offering, the Lady Million will retail from July as a 50ml and 80ml edp spray, priced at around €52 and €68 respectively in travel retail. The body ancillaries include a shower gel, deo spray and body lotion. 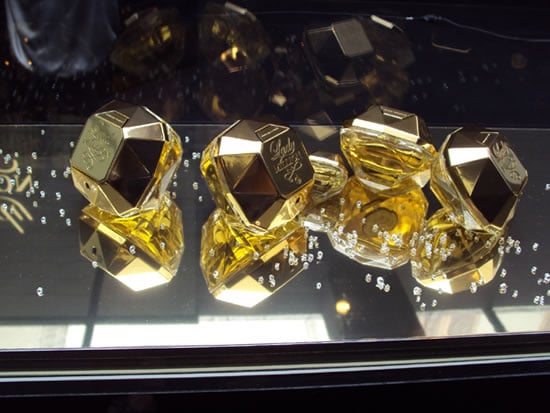 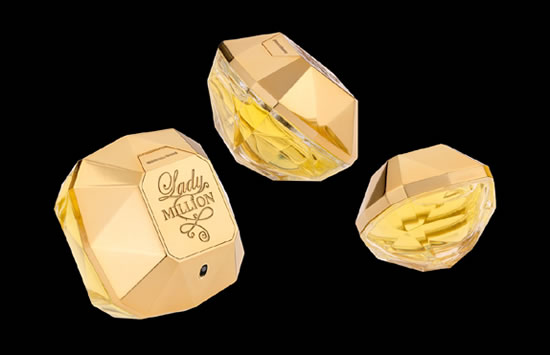