Be it rise of planned terrorists attacks like the Charlie Hebdo case in France or random shooting incidents happening all over the world, we are witnessing a sharp decline in safety on the streets for common people. While wearing a bulletproof vest all the time doesn’t make sense, nor is it practical, but a company named ‘Covered Six’ has developed a briefcase that will help you make through the ordeal without getting killed. Meet the Savior MTS, which stands for Multi-Threat shield. The unassuming nylon laptop bag can also protect you from gunshots, knives, and even physical attacks. Unlike the bulletproof briefcases we have seen in the past, like the ‘Tumi bulletproof case‘, that only protect the contents, the MTS unfurls into a 3-ft (1 m) long shield filled with laminated Kevlar. 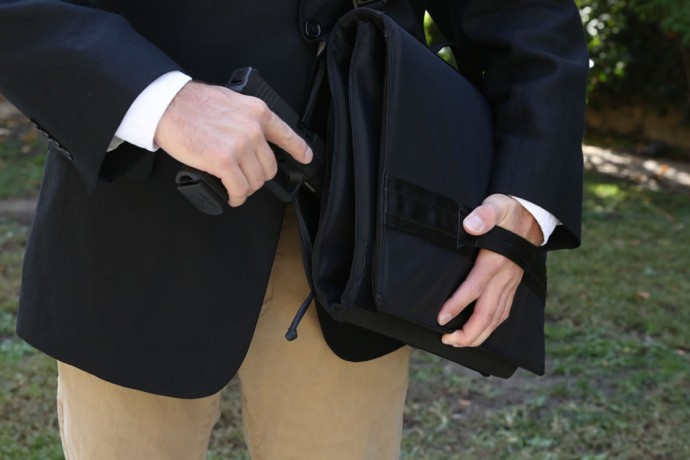 Though the Savior MTS is a little on the heavy side at 8 lb (3.6 kg), but it looks like an ordinary soft-sided sling bag and fit a laptop. A simple “flick of the wrist” transforms it into a shield, which according to Force Training can withstand repeated hits by handgun, shotgun, and pistol caliber sub-machine gun rounds, and can also ward off clubs, knives, and other assaults thanks to a Shock Pad and Kydex insert. It also comes with a MIL-SPEC shoulder strap, so it can be used while leaving both hands free to operate a gun, provided you have one. According to Force Training, the official distributors of the bulletproof case, the Savior MTS is aimed at executive and dignitary protection, home defense, workplace security, law enforcement, and first responders. The MTS comes in black and is priced at $900. The company also offers training and instructor certification.

Tags from the story
Briefcase, Bulletproof