While celebrity dedications by designers are the way to go fashionably, Louis Vuitton’s appreciation for Sofia Coppola had long crossed the handbag threshold. After having the 2009 SC Louis Vuitton to her credit, the director was among the select few to be featured in the brand’s artistic exhibit in Tokyo. But also long-awaited was the launch of the new Louis Vuitton SC Bag Le Bon Marché Rive Gauche. The small and mini versions of the original SC, along with BB bags, now beam through the window displays of the prestigious Parisian store. And much like the original design, the hand behind Le Bon Marché’s effervescent décor belongs to, besides the brand, the fashionable filmmaker. 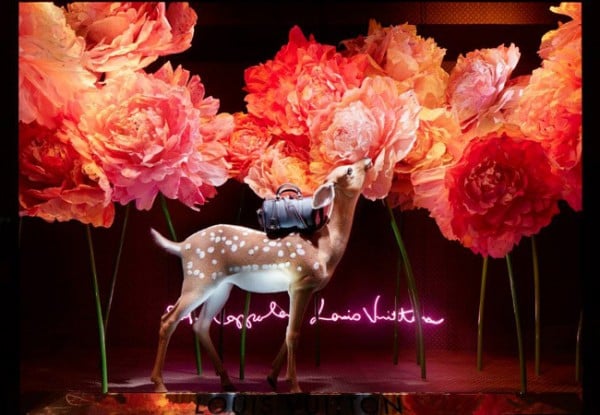 Blossoming peonies greet onlookers in lush corals even as two names peak from beneath in pink neon- Sofia Coppola and Louis Vuitton. Not to mention the deer that demurely poses with its head up instead of down, perhaps for the handbag delicately balanced like its crown. Yet another display blooms with a multitude of heart-shaped balloons forming a big fuchsia heart with a white bag in the air, almost as if by magic, while the two names shine above it, yet again in pink neon. 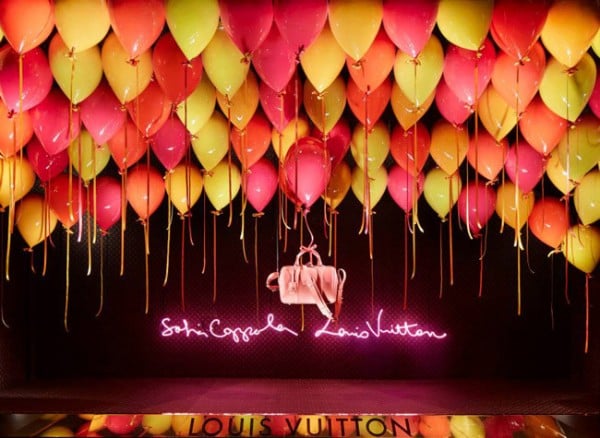 In yet another showcase, colorful balloons splendidly suspend another designer creation as they hover on the window ceiling with their ribbons lolling delightedly beneath them. Neon glimmers in a big way in a different display where neon hearts adorn three bags as the names stay amidst them. The cherry, purple, and tan totes pose right in time for the Paris Fashion Week, while Le Bon Marché’s limited edition fuchsia-piped, cobalt blue SC bag takes the prime location. “I wanted it to be fun and feminine and to think of the bag as a present or a treat that you get yourself,” said the filmmaker of the inspiration. 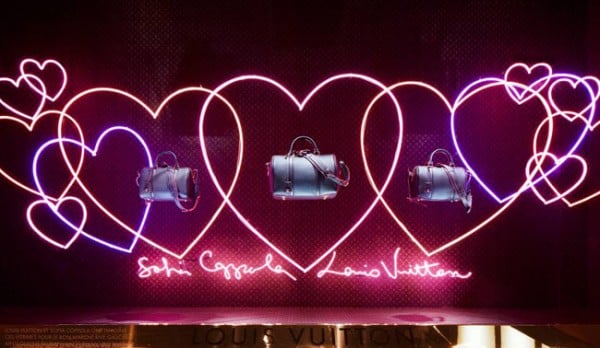 Fashion doesn’t wait for Christmas. “It reminds me of Christmas, seeing the windows, so [I wanted to do] something that kids would enjoy too,” chimed ‘The Bling Ring’ director of the ten windows. This window whimsy will be visible until October 26, 2013, and shine brighter than the last LV display did deck out in prehistoric ethos.