Thomas Jacob who created the brand Tommy Hilfiger is one of the most famous fashion designers. With umpteen books and videos to his name, he continues reigning large in the fashion industry. Whether it is sportswear or formals or casuals for different seasons, you can bank on Tommy Hilfiger to have it all. 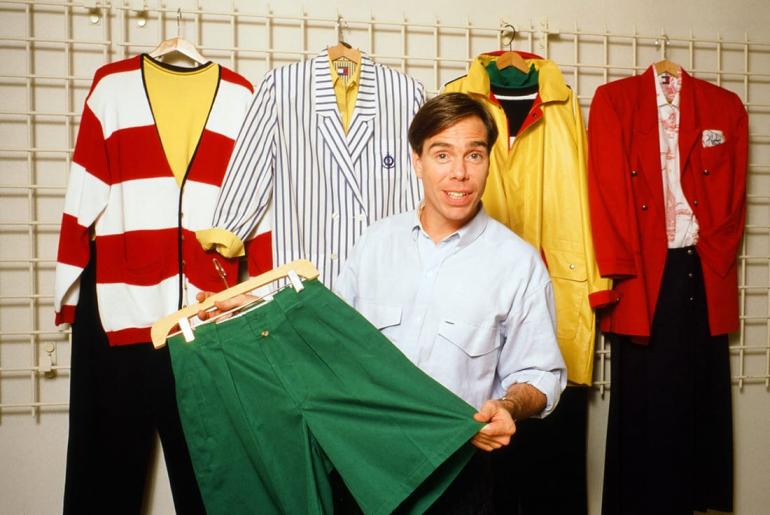 Early Beginnings
Born on 24th March 1951, Tommy Hilfiger was the second of nine children of an Irish-American middle-class family in Elmira, New York. His mother was a nurse and his father made watches at the local jewelry store. For school, he attended Elmira Free Academy, New York till high school. Here neither did he excel in sports nor in academics, because he was short and small in stature and suffered from undiagnosed dyslexia. But his entrepreneurial skills were always seen. As a teenager, he brought sets of jeans, remade them and sold them for a markup at Elmira. After opening up his store in Elmira, called People’s Place, he sold jeans, hippie pants and bell bottoms which were a rage in those days. But People’s Place went bankrupt when Thomas Jacob was 25.
Later he worked for several labels and set up Tommy Hill, his initial company in 1979. There was a design team for this company. He went to India to see how jeans are made. He would sit for hours watching how they were made and tweaking the design in his own sketches.

Making it big
Later Tommy was offered work with Calvin Klein which he accepted. But during his term there, an Indian businessman Mohan Murjani approached him. His offer was to let Tommy create designs under his own name. He wanted him to design men’s sportswear and provided Tommy with the necessary backup with investment. In 1985, he founded Tommy Hilfiger Corporation with the help of Murjani. There was high profile marketing for this brand with a huge billboard in Times Square. When he left Murjani in 1989, Silas Chou provided him with the necessary investment. He got former Ralph Lauren executives on board to work for Tommy Hilfiger Corporation. By 1992, the menswear collection hit the markets. The signature red, blue and white logo was created. His first store was opened in Beverly Hills. It has grown to over $6.5 billion in global retail sales in 2015.
Today with 17, 000 associates worldwide, a network in more than 115 countries and 1600 retail stores in Europe, Latin America and Asia Pacific Region, he has gained supremacy in the fashion industry. 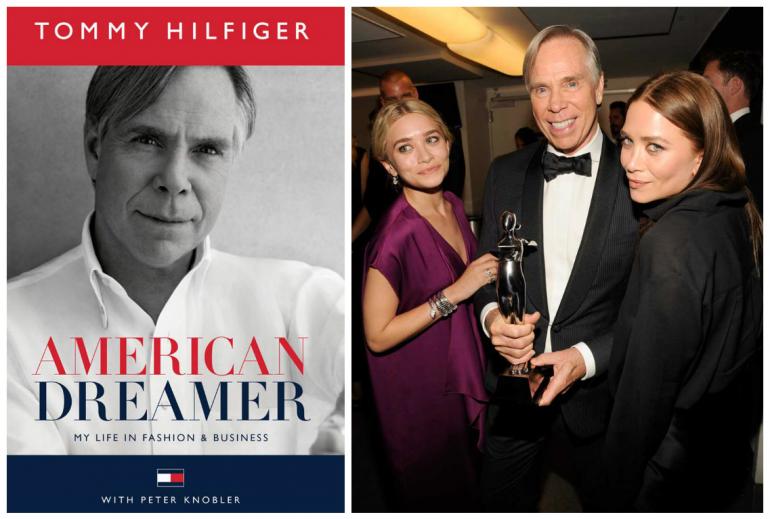 Books and Awards
Beginning with his first book- ‘All American- A Style Book’ in 1997, he is the author and co –author of numerous books on fashion. Rock Style: A Book of Rock, Hip-Hop, R&B, Punk,
Funk and the Fashions That Give Looks to Those Sounds, Grace Kelly: Life in Pictures, New England Style are some other famous books by him. His latest book in 2016 is- ‘American Dreamer- My Life in Fashion and Business.
A winner of many awards, his work in the world of fashion has received due recognition and acknowledgment. Some of these include GQ magazine awards for Best Designer, FiFi Awards, Parsons School of Design Awards, Best Menswear Awards, Pratt Institute Award and so on.

READ:  Green is the theme for Chanel Spring-Summer 2016 Haute Couture 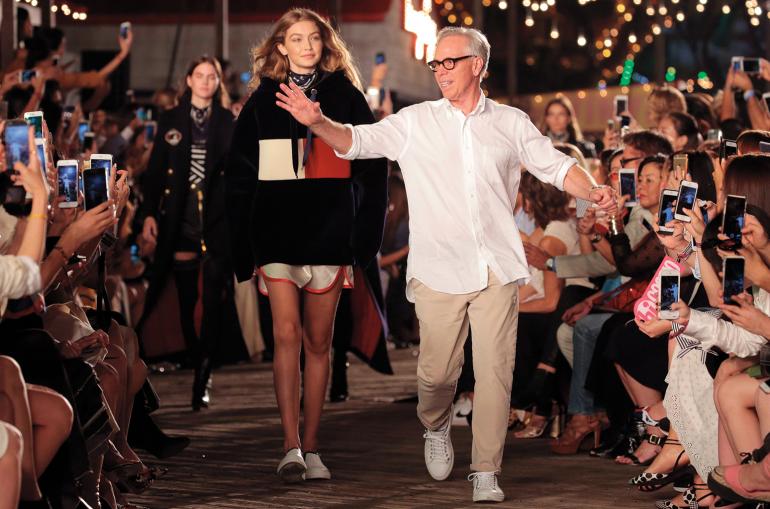 Fashion Sensibility
A lover of Rock and Roll, his designs reflected this particular music and style. It was evident in almost all his collections and lines of clothing. Soon Hip Hop musicians wore his designs from Snoop Dogg to Puffy and Coolio. He drew his influence from a number of American icons like John F. Kennedy, Andy Warhol, Grace Kelly, James Dean, Deborah Harry, Iggy Pop and Stevie McQueen. His style icons were mainly from the hard rock, punk, hip-hop and pop music industry. 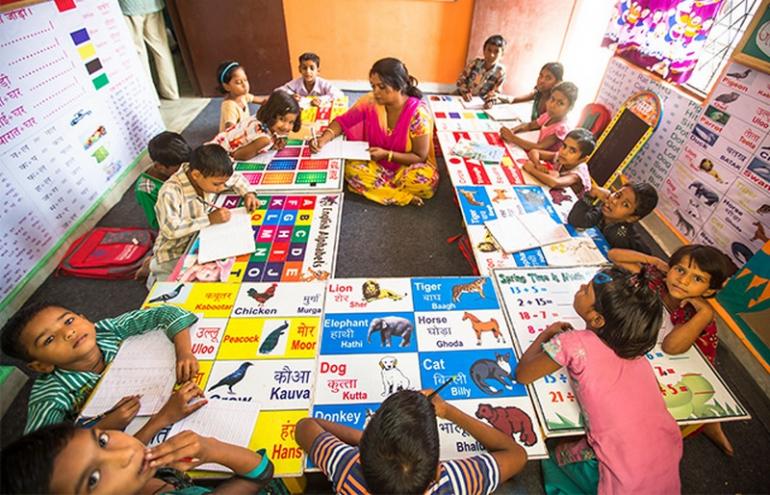 Philanthropy
Tommy Hilfiger has been awarded for his philanthropy by the UNESCO in 2009 for his philanthropy. He has also been awarded by Harvard Foundation as Humanitarian of the Year in 2006. Recently in 2015, he was awarded for his commitment to finding a cure for MS. He works for a number of organizations. Save the Children, Autism Speaks, The Fresh Air Fund- the summer camp for underprivileged children also known as Tommy Camp are few other organizations. He also funds and works for Breast Health International which focuses on finding a cure for Breast Cancer. He also made a five-year pledge with Millennium Promise in 2009. Thus, for five years, he pledged on giving $2 million dollars to Millennium Promise- a non-profit which focuses on eradicating extreme poverty, hunger and preventable disease in impoverished regions. He has partnered with Runway of Dreams to create ‘cool American clothing’ for children with disabilities. 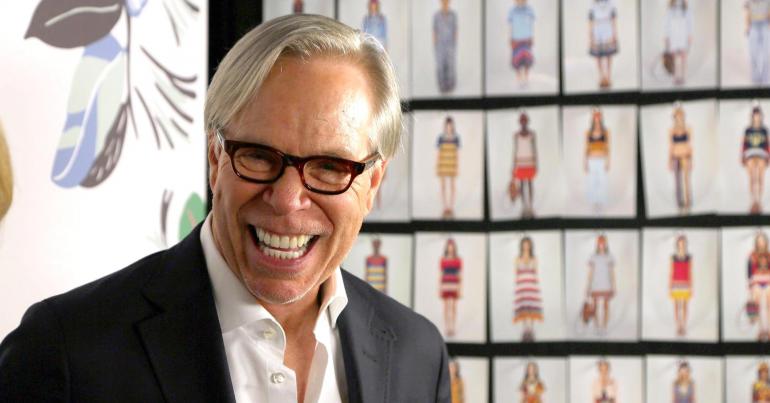 Family Life and Wealth
With four children with his first wife Susan Cirona who was an employee at his initial venture- People’s Place, he now has a son with his second wife. His children appear on television many times. He has appeared in many reality shows like Project Runway and American Idol. He has recently played a cameo of himself in Zoolander 2. His Stone Hill Estate which was located in Greenwich, Connecticut was sold for $20 million. He also owns a crimson Ferrari Enzo named after the creator of the car which is worth $5 million. It is a 650 horsepower supercar.
With a net worth of $250 million, Tommy Hilfiger who has 5400 people working for his stores worldwide, stands as one of the major designers for almost all the types of clothing and sportswear.