Although the sari has originated in India, this flowing work of art is favored worldwide for its grace and sensuousness! Hermes saris have wooed Indian women and a silk sari fitted with an iPod has enchanted all geeky divas. But when a sari has the ‘world’s most expensive’ tag attached to it, it will grab everybody’s attention to the world of fashion. Indian-based, The Chennai Silks has designed the world’s most expensive sari. Worth $75,000 (4 million INR), this sari is bejeweled with gold, diamond, emerald, ruby, platinum, silver, yellow sapphire, sapphire, cat’s eye, topaz, pearl, and coral. However, the highlight of the sari is that Ravi Varma paintings, including the ‘Lady Musicians’, have been woven into it. Every intricate detail like the female musician’s curly hair and the jewels they are wearing has been replicated in the painting. The border of the sari also flaunts 10 paintings by Ravi Verma.

It has also set the record of being the world’s first sari to require 7,440 jacquard hooks to complete. Weighing about 18 pounds, the sari was completed in about seven months by 30 hand loom weavers. 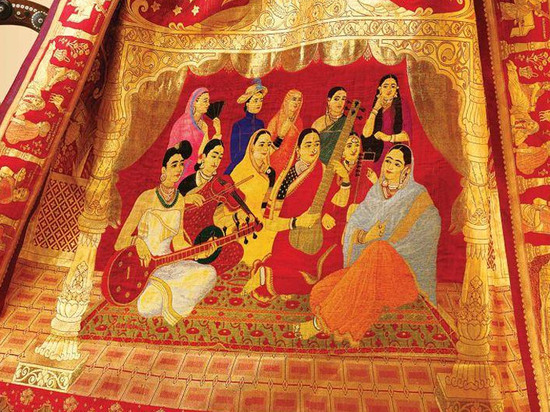 Tags from the story
Most-Expensive, Sari