With Halloween around the corner, we can’t decide whether to turn witch or fairy with the help of our old, already used and stocked up to dust costumes. And while we are hardly ever spoiled in the name of choice, some people clearly have it otherwise! We are talking about beauty blogger and YouTuber Jeffree Star who recently destroyed a Louis Vuitton bag as part of her Halloween gig. 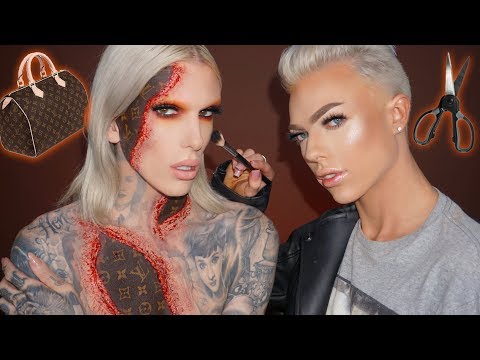 The handbag, a $1000 Louis Vuitton Speedy 24 was torn apart by the 32-year old in an ode to create an artsy and rather gruesome look. As revealed in her latest video, Star transformed herself into what looks a hybrid human bag or a creature that has just burst out of the LV wonder. While the final costume looks life-like and every bit amazing, it came into being at the cost of a rather expensive LV bag, which has had the internet up in flames!

We’re about to cut up a Louis bag for this look… hiiii Halloween costume 👻 @ColeCarrigann pic.twitter.com/95a4gxfkLa

After posting a teaser of her DIY project on twitter, Star received a string of distraught responses with one that read, – “Can’t relate, not rich enough to even own one, let alone cut one up.” Another dismayed fan (or not) went on to add, “We get it, WE’RE POOR.” Some however, supported the Internet sensation by lauding her artistic courage and desire to spend her own hard-earned money her way. What would you make out of Jeffree Star’s Halloween look?