One of the first few pictures of the actual screen’s dual 15.4-inch screen Spacebook with two full screens is finally here for all you geeks and techno freaks. The amazing Spacebook developed and created by the Alaska based company, started by Gordon Stewart is sure to blow your mind. The gScreen Spacebook has been aimed at professional designers, filmmakers, photographers, and anyone who can’t live without a dual-screen for everyday productivity. The company has also been in talks with the military. The frame is built around the 15.4-inch screen (though the first units that come to market will have 16-inch or 17-inch screens) and its twin, identically sized screen slides out from behind the first using a uniquely designed sliding mechanism. So when the user opts to use both the screens, he will get about 30 inches of screen space. The laptop will run Windows 7 and be powered by Intel Core 2 Duo processors 4GB of RAM and high-end Nvidia GF900M GT discrete graphics. There are also plans for fast 7,200 RPM hard drives and six or nine-cell batteries. It will also have a DVD player to watch a flick on one screen and work on the other.

Gordon claims his Spacebook is exactly the opposite of the current favorite- Netbooks. And so ambitious is Gordon about his little dual screen project that he plans to have it ready by December and sell the first few models on Amazon.com. What is more, gScreen is hoping that they can keep the price of their Spacebook below $3000. We’ll just keep our fingers crossed and hope that this amazing Spacebook achieves both its goals of maintaining an affordable price and releasing as per schedule. 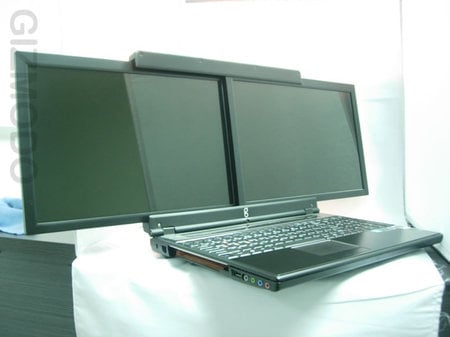