Harrods, the upscale departmental store in the UK has launched a new technology department that is putting a 152” Panasonic television on sale. The TH-152UX1W model which was unveiled in CES 2010 weighs in at 600kg and is enhanced with the 4K2K technology which boasts of four times as many pixels as a conventional high definition TV set. This pretty much means that it is capable of creating a separate 3D image in HD resolution for each eye. To get a fair idea, you would get a single 152” TV set when you stack up nine 50” displays in three rows with a resolution of 4096 x 2160 resolution.

What is the price on this massive TV? It is a whopping £600,000 (about $950,00). That is close to a million dollars and many notches above its original price of $670,000. But then again, Harrods is a niche store and affluent people go the extra mile only to make some heads turn. 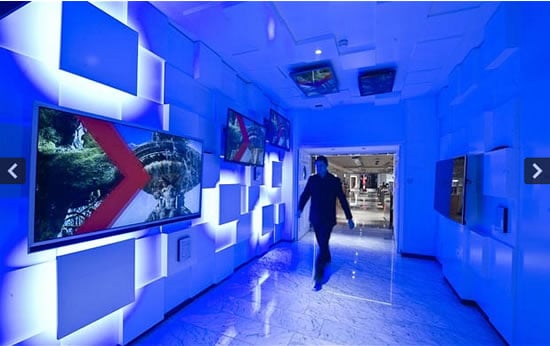 The new 20,000sqft tech department has opened on 16th March 2012 and offers a premium selection of consumer technology categories including home computing, audio-visual, photographic and mobile communication. A bespoke suite of aftercare services will also be offered to Harrods customers with a dedicated customer service bar in-store.
{Ubergizmo}
{Thetelegraph}