SE2 Labs gave Gizmodo a peek of the ITC One, an integrated movie, TV, gaming, and music system that they had announced last year. The ITC One looks pretty sleek and houses a lot of essential specs that will please serious buyers. The system combines an Xbox 360, Wii, Apple TV, iPod dock, and a DVR with various audio/videophile hardware and is housed in an attractive aluminum case. Since the system requires packing in many features most of the internal components are stripped of their shells, and in some cases augmented (Optical audio out is bypassed to connect straight to the S/PDIF connectors on the Xbox and Apple TV, and the Xbox gets a new heat sink and fan). Apparently, most of the hardware is plugged to a central supply, which ITC claims saves 50% power at idle and 33% during use over an equivalent traditional cabinet of hardware. Networking is shared, and the systems can be controlled with face-forward LCD or the all-in-one remote, with motion sensitivity, 4-6 month battery life on 2 AA batteries with a charge indicator. The remote also has an alarm that beeps when you press the “lost remote” button on the primary unit.

The ITC All-in-One Home Entertainment System does not feature Blu-ray as standard. And in case you want to include it as an upgrade, you will have to make do without the Wii, to make the space. The Runco upscaler, power conditioning hardware and A/V hardware are apparently cost-ineffective. It’s possible to get all the core hardware (Xbox, DVR, Apple TV, etc) in here for less than $5,000. This is why the $25,000 price tag seems a bit outrageous. The ITC One is available now. 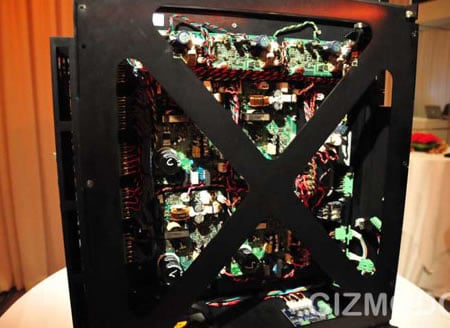