In many ways today’s modern television is a work of art, with curved designs, ultra slim, flat panels et al; the TV has however, always been considered a technology marvel and while it’s primary space in your abode may be the living room, it really isn’t considered a part of the furniture… until now. Enter the suave, artistic and definitely one of a kind Serif TV that combines a modern and chic home décor design with the technology that has made its mark on the latest video viewing generation. Samsung and Ronan & Erwan Bouroullec, in an exclusive partnership have unveiled this artistic television and plan on launching it at this year’s London Design Festival (21st-27th September). 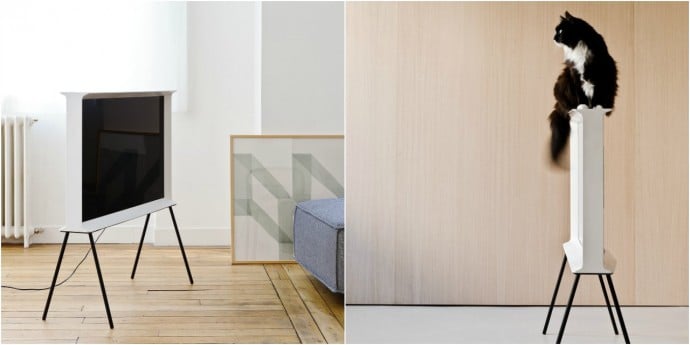 The tie up between the Paris based design firm and the South Korean tech giant was probably one that’s been a long time coming, perhaps not specifically with these two companies, but with the individual offerings that they are renowned for. The companies believe that the Serif TV does not belong to the world of technology but to the world of furniture and design and in this case, I’m inclined to agree. While at its core it’s still a high-end HDTV with all the technology trimmings one would expect in its bracket, the idea behind this collaboration was to provide consumers with a more elegant viewing experience and to help make the usually steel and chrome clad technology look and feel little more naturally blended into the style of your home. 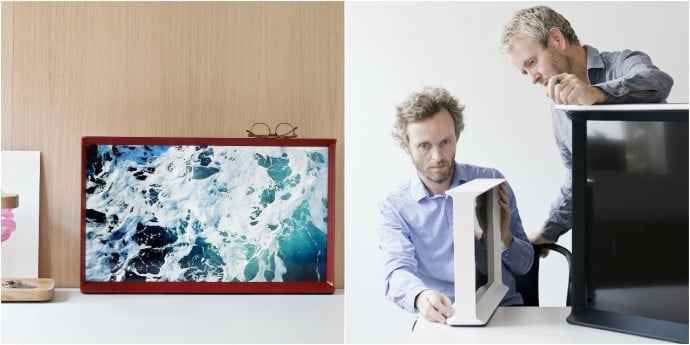 The Serif is a TV defined by a seamless frame that outlines the screen in one color and one shape. With its unique flat design the Serif could be placed anywhere in a room either on its own base or on its attachable legs. Ronan & Erwan Bouroullec were even licensed by Samsung to develop the user interface of this new-age smart-TV. With features like ‘curtain mode’ that provide a silent, abstract impression of the TV screen, access options could look a little more sophisticated as opposed to the futuristic, cool and colorful options as the we’ve come to know of today’s smart gadgets. The connectors are concealed using woven fabric panel slots and the pattern of the fabric on the body of the TV has been crafted to emulate the effect of the curtain mode setting, and matched to the color of the television.

Head of the design team in Visual Display at Samsun, Y-J Kang, had this to say: “As technology increasingly forms part of our day-to-days lives, the design of a product is now just as important to consumers as its functionality.”

Erwan Bouroullec comments: “From the outset of designing Samsung Serif TV our aim was to craft an object that fused technology with our knowledge in furniture design and to create a solid presence that would sit naturally in any environment.

Although pricing has yet to be announced, we can expect it to be officially presented at the London Design Festival at the time of the Serif TV’s official debut. The Samsung Serif TV will be available in three colors: ivory white, dark blue and red. This could mark a whole new era in the way we ‘view’ the television as a technology component, and I think it’s about time.

READ:  Samsung teams up with Supreme rip-off at a launch event in China
Tags from the story
Samsung