In the modern era, speaker technology has come a long way and so are the attributes to their shell, i.e. the speaker box. Designers and manufacturers have been tweaking the shapes and sizes to provide for the most astute audio quality while providing some aesthetic appeal to one’s home decor. But every once in awhile, a speaker design comes along and, for lack of a better term, adds a bit of shock factor to the field. The best example of this would be the SOP (Sound of Power) Series from artist Petro Wodkins that we covered last year. in 2014 he announced a series of speakers that were built into the busts of famous presidents and dictators and this year, the latest to the series is a bust of Vladimir Putin aka St. Vladimir, that features a built in speaker.


According to the artist, the SOP series is a tribute to the porcelain figurines and busts that apparently our grandparents “loved” to collect. They also pay somewhat of a lopsided tribute to the individuals they’re designed after who “marched to the beat of their own drums”. While all that may be partially true, the fact that these are desktop speakers built into a bust of a famous person essentially means there’s a speaker sticking out the side of the person’s head and while there might be some collector’s appeal for all things strange or “unique”, it does look rather odd as speaker designs go. 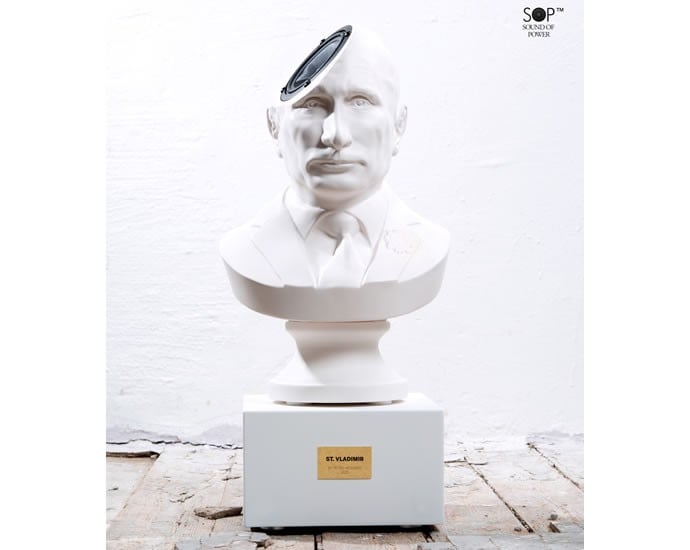 These “masterpieces” of audio have been created in Russia, handcrafted in Sweden and have been dubbed as collector’s items. They feature high-quality speakers with the amplifier and connections built into the handcrafted wooden stand and thankfully not someplace else on the face. Each of the speaker components are meticulously checked and inserted into the bust which is made of a composite martial that’s designed to look just like a marble sculpt.

The Vladimir Putin SOP speaker is part of Wodkins’ 2015 series, only 100 of which are being produced. An auction that will be held up to the 07th of October, Putin’s 63rd birthday, featuring the first and one hundredth pieces being offered up with a starting price of $1250 (€1,111).