Despite his death, brand Michael Jackson is still one of the strongest selling names out there. Counting on this popularity is Samsung Electronics who have announced the Samsung S2 Portable external hard drive, pre-loaded with the movie ‘Michael Jackson’s THIS IS IT’. The release of the full transportable hard drive is timed with the DVD and Blu-ray Disc release of ‘Michael Jackson’s THIS IS IT’. Besides the preloaded movie, this hard drive boasts of an increased capacity of 500GB and improved data recording technology. The hard drive also features USB on board technology and supports various user-friendly features such as Samsung auto backup, SecretZone and SafetyKey. The special edition hard drive will be a great storage device for users to store their movie collection.

The special edition S2 Portable external hard drive pre-loaded with the MJ movie will be available through retailers in Europe from February 22nd. 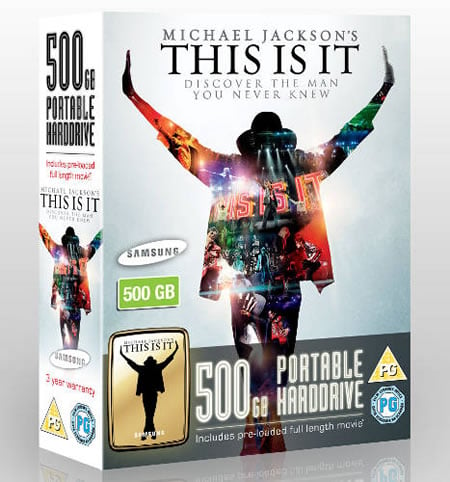 Tags from the story
Portable, Samsung