The spread of highly contagious novel coronavirus has virtually put the entire world into a lockdown, creating an unprecedented situation. Schools, colleges and other educational institutions were among the first to shutdown, with many of them now moving to virtual classrooms via video conferencing platforms to continue with classes. However, one university in Japan took the use of video conferencing during lockdown to a whole new level. The Business Breakthrough University in Tokyo didn’t want to stop its traditional convocation ceremony to award degree certificates to its graduating students and rather came up with a very clever workaround. Instead of the students being physically present at the ceremony, the university used life-size robots equipped with tablets and Zoom remote conferencing service.


The Business Breakthrough University used ANA Group’s “Newme” mobile robots that have wheels to move around and are of the size of a full grown human. The robots were even outfitted with graduation gowns and caps, and the tablet screens displayed the student’s face via Zoom while virtually collecting their degrees. The ceremony was held at the Hotel Grand Palace in Tokyo and four students controlling the robots along with a few administrators from the university conducted the entire convocation. The university’s president, Omae Kenichi, was also physically present at the location to award the degrees and give an address at the ceremony. “When I enrolled, I never thought I would operate my avatar and attend the graduation ceremony,” an anonymous graduate said in the school’s statement. “However, receiving a diploma in public is a novel experience.” 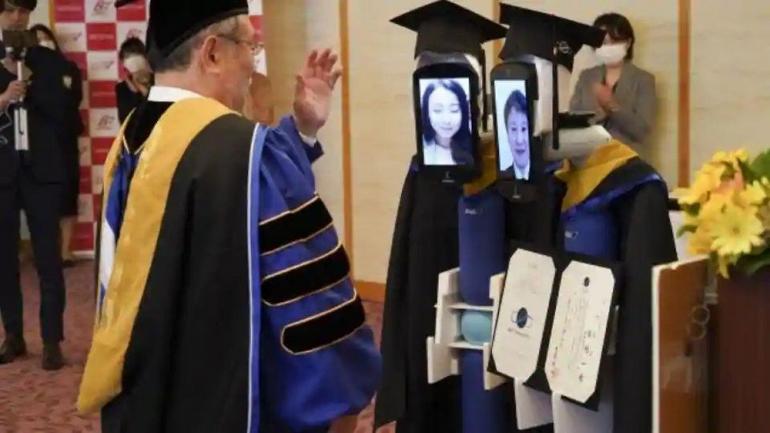