Proud to be named as the Best Female Chef 2015 by the organizers of Asia’s 50 Best Restaurants, Vicky Lau is beaming with joy at the very thought.

Vicky Lau may have begun her career as a graphic designer, but finally followed her heart and pursued her dream of becoming a culinary connoisseur. Today, she is the owner of the highly recommended Michelin starred diner, Tate Dining Room & Bar in SoHo after enrolling at the prestigious Le Cordon Bleu School in Bangkok. 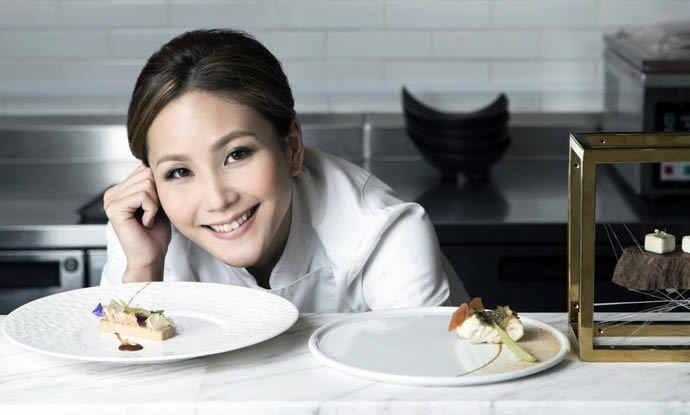 Vicky Lau is far from your conventional chef. She says each of her menus is based around a common theme, sparked by a simple abstract thought or story. She describes the resulting meals as “edible stories”

The award winner was chosen by the same panel of 300 experts who choose the 50 best restaurants, an annual ranking sponsored by S. Pellegrino & Acqua Panna.

In an exclusive tête-à-tête with Luxury Launches, Vickey Lau reveals her journey from a graphic designer to a renowned chef.

LL – What inspired you to be a chef?
Before I switched careers to become a chef, I studied graphics communications and worked as a creative director. I spent several years learning how visual cues like colours or textures could be used to trigger a memory or spark the imagination. While I was training at Le Cordon Bleu in Bangkok, I realised that food, as a medium of expression, was actually a far more liberating canvas to explore creativity because of the added dimensions of taste and smell. It’s also great to have the instant gratification of seeing someone enjoy your food.

LL – After years of the culinary industry being dominated by the male gender, do you feel that the male-female ratio is now attaining a balance?
Women have made great strides as cooks, but there are few working in professional kitchens now, and I think many women are discouraged because people think that cooking in these kitchens is physically more challenging. However like I said above, you always learn to adapt.

That’s why it’s important to recognise female talent in the industry. The more women are noticed in this field, the more it disproves the misconceptions, because there is living proof that women can take on this career and succeed.

LL – What are the obstacles you have faced so far as a culinary connoisseur?
It was challenging at first, especially at the beginning of launching Tate, since this was my first time being a chef and restaurant owner. Balancing the two is like having a split personality. However I think that regardless of gender, the dining industry would be tough for anyone.

LL – Do you have a signature dish that you enjoy cooking?
For me, cooking is a harmony of art, craft and science. I am always driven by my passion to tell a story, so the dish that best defines me is one that incorporates all these factors. One of the earliest dishes I created was “Zen Garden” which I usually serve as the last course of a meal. It consists of matcha mousseline, white chocolate mousse, dacquoise, sake kasu sauce and yoghurt crumble. It’s a medley of desserts, but presented as a mini Zen garden that prompts self reflection. This dish is a tribute to the masters of the Zen garden and the art of tea making.

Another dish would be “An Ode to Tomatoes”, inspired by a poem by Pablo Neruda. It describes the life of the humble tomato in the midst of a busy market scene. In this dish I depict tomatoes in different textures of panna cotta, confit, crisp, consommé and gelée, accompanied with a simple pommery mustard ice cream, which is a perfect flavour pairing with this fruit.

LL – What led to the concept of the Tate Dining Room & Bar?
I wanted to build a cozy place where I can express myself as a chef and have all my guests experience food that is fulfilling for their taste buds as well as their minds.

LL – From a graphic designer to a renowned chef, can you tell us a bit about your career change?
I took what was meant to be a recreational stint at Le Cordon Bleu Bangkok, the culinary school, but along the way learned that food could really be a great medium for creative expression which I’m really passionate about, because on top of the visual creativity there are the added dimensions of taste and smell, as I mentioned above. As for the decision to start my own restaurant in Hong Kong, I really see Hong Kong as a place for opportunity and entrepreneurship and, driven by my love for creative work, I set out to make a home for this passion.

LL – Can you recount some of your most cherished memories from the Le Cordon Bleu School in Bangkok?
One of the most memorable moments will have to be when I burned all ten fingers from doing sugar work! All the chef said was “what doesn’t kill you only makes you stronger”, which turned out quite true.

LL – How would you describe your style of cooking?
My style is Feminine, Creative with a focus on storytelling. I like to consider my dishes ‘Edible Stories’. Using my background in graphic design, I start with a theme, a narrative or a concept and build on that.

Tags from the story
Chef, Interview