Not the drink, silly. The vineyards of Avenue de Champagne in France which has given us the sweet sparkling nectar of life has been chosen by UNESCO as a World Heritage Site. Yay. So what would that mean to us bubbly-loving folk? I don’t know, maybe that you can toast to the occasion with prehistoric significance.

Champagne is a symbol of celebration. It is difficult to connect it to something that come in the same lines as the wrapped mummies of Egypt or the Persian marble slabs of Agra, India. But there is history. A rich and intriguing one. Champagne was born in an area called Avenue de Champagne in Epernay, France. There are several grand houses here which have beneath them huge cavernous cellars with millions of bottles of sparkling wine, which were ‘developed using a second fermentation method in the bottle from the beginning of the 17th century until its early industrialisation in the 19th century’. The vast vineyards are considered to be the most expensive agricultural land in Europe, and perhaps the world. 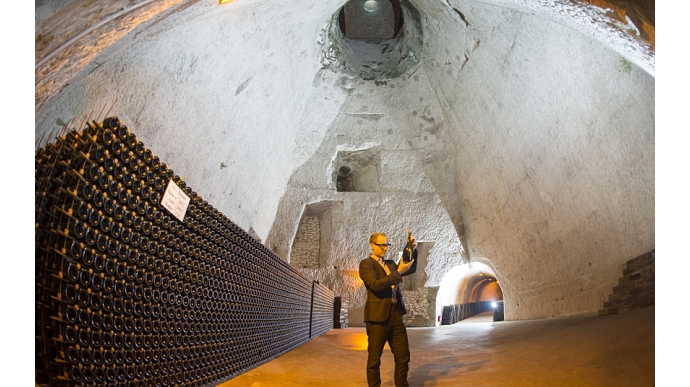 Here is a little bit of note for those who do not understand the concept of a World Heritage Site. The stamp of UNESCO falls on any site, anywhere in the world, that has a rich history and needs funds to help preserve it for posterity – places that have a ‘special cultural or physical significance’. The United Nations Educational Scientific and Cultural Organisation started listing these sites from 1978. Some of the names are more familiar to us like the Pyramids of Gaza, Taj Mahal of Agra, Grand Canyon National Park and the Great Wall of China. There are plenty of hidden gems that we don’t hear too often and which can be a very interesting list for those who enjoy reveling in the remnants of the past. This makes us shudder at the thought of all the history drained, alongwith the hundreds of dollars, in a pool by some crazy pop singer in the name of fame and promotion.

Now here is the twist. Apparently, such sites that get a UN stamp means it is liable to funds for preservation. Champagne doesn’t really need funds because some of the houses in the Champage like the most ancient Ruinart and Veuve Clicquot are owned by LVMH – Louis Vuitton Moet Hennessy. Yup.

Food for thought. Or just have a glass of bubbly and chill.