In the age of extreme competitiveness, it is common for companies to go overboard to market their products, but here is one example of brand advertising taken to an unprecedented level. ‘Pocari Sweat’ might bear an unappetizing and disturbing name but it is one of Japan’s most popular drinks. To be a part of never ever attempted feat and create a massive buzz for their product across the world, Japanese beverage maker Otsuka will send a 1 kg titanium can filled with powdered sports drink to the moon; yes! You read it right, to the moon. This will be the first instance of a commercial product taken to earth’s only natural satellite for marketing purposes. 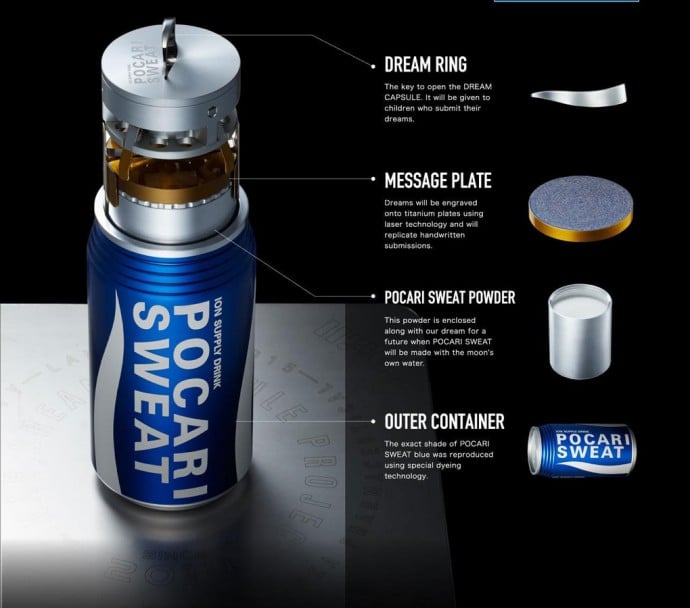 Otsuka Pharmaceutical Co said it will take part in a private rocket launch in October 2015 that is intended to explore the moon, and hopes to put its flagship beverage onboard. A specially designed canister will be created for the purpose which will contain a shipment of Otsuka’s Pocari Sweat powder. The Japanese company also believes that this will inspire young people to become astronauts, so they can travel the 380,000 kilometers (236,121 miles) to the moon, crack open the can, and make the first sports drink on the celestial body by mixing it with water. In fact the capsule that will carry the cans has been named ‘Lunar Dream Capsule’ and will also take messages from children to the moon’s cratered surface. The project will be jointly conducted by US Astrobotic Technology and Astroscale, said Otsuka, and the capsule will be conveyed to the moon by the Falcon 9 rocket.

Tags from the story
Advertising