The 300th anniversary of your brand is a big deal. When you’ve got three centuries of experience behind you, an anniversary cake and an office party just won’t cut it. Maybe that’s why Martell Cognac is celebrating their 300th anniversary by launching a limited edition new blend 18 eaux‑de‑vie from their cellars. Cellar master Benoît Fil actually used Jean Martell’s original correspondence to identify Martell’s notable suppliers from 1735 to 1742 and sampled eaux-de-vie from winegrowing families whose ancestors had originally supplied the brand’s founder. The resultant blend was then aged in an oak barrel from a 300 year old tree marking the birth of the Martell Premier Voyage. This signature blend is priced at €10,000 per bottle, that’s about $12,760.

The complex Premier Voyage features aromas of notes of candied orange peel, blackcurrant, honey and gingerbread followed by walnuts and dried fruit. The flavors begin with candied fruit and develop in blackcurrant, spice and beeswax. 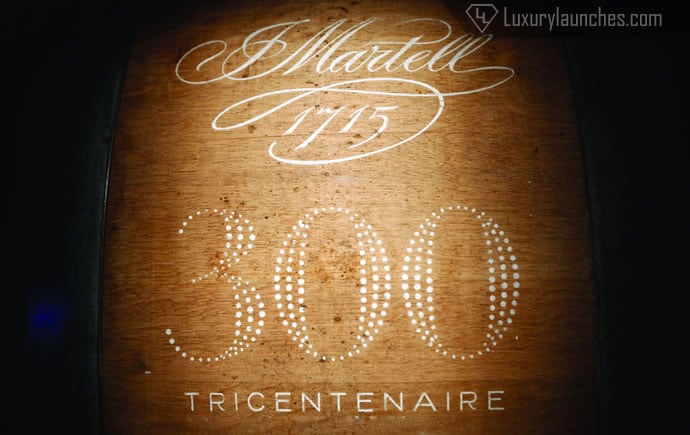 In order to further heighten the mood of the beautiful blend, artist Bernar Venet was invited to create an artwork which would be a fitting home for the Premier Voyage. His design features flowing metal arcs that surround the decanter, functioning to highlight its shape and delicacy. The decanter itself is a simple teardrop shaped vessel created from Sèvres crystal. The presentation beautifully encapsulates both the deep rooted history of the brand as well as its modern appeal and significance.

With the production limited to 300 pieces, customers can expect their bottle to be signed and numbered. You will need to register yourself to buy this stunning blend as each bottle is produced to order.

Tags from the story
Cognac, Limited-Edition