Ever watched an episode of Guinness World Records and thought, ‘Hmm, I should create a record,’? No? Well, Andrew from Dallas seemed to have done exactly that before walking into Starbucks one fine morning and creating a new record for the most expensive drink ever purchased from the famous coffee chain. The mammoth 128 ounce milkshake contained a whopping 60 shots of espresso, two bananas, strawberries, matcha green tea powder and pumpkin spice. The total cost of the drink was a whopping $54.75, but here’s the kicker, Andrew didn’t have to pay at all! Making clever use of his Gold status in the Starbucks loyalty program (which allows him to score one free drink for every twelve that he purchases) Andrew made sure that his monster milkshake didn’t cost him a single cent. Now that’s what we call smart shopping.

Andrew’s container of choice was a large glass vase that actually did look like a giant milkshake glass and while Starbucks employees have refused to create drinks in customers own containers for health reasons in the past, they seemed to have made an exception here, probably because Andrew was pretty upfront about doing it to create a record. Andrew reportedly consumed about a third of the drink that day. Considering that’s an average of 20 shots of espresso, our guess is the new record holder is not going to be drowsy for quite a while. 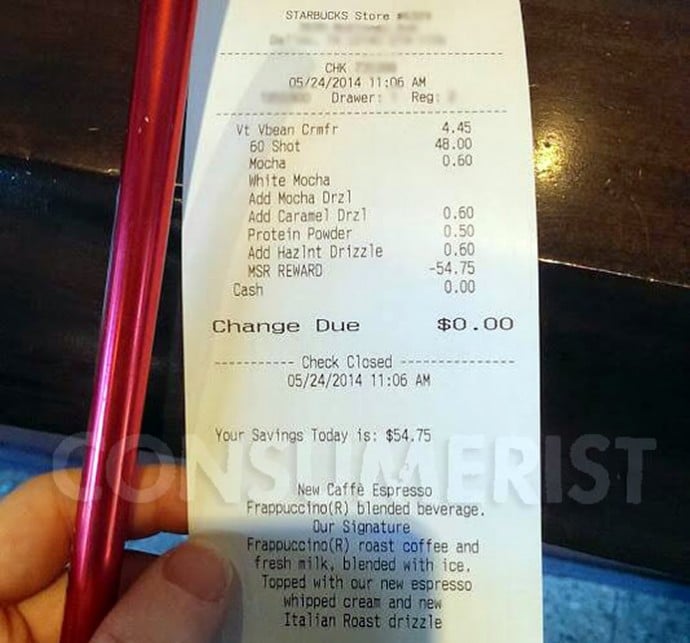 Kids, there’s a lesson to be learned here, always get creative with your freebies! Why settle for a large latte when you can get a $54, record busting monster milkshake instead?