With promotional movie merchandises growing in popularity, both with filmmakers and audiences, Disney too has decided to rope onto this brilliant marketing gimmick. In line with the slotted release of the much awaited “Beauty and the Beast” this year, the mass media conglomerate is all set to unveil an exclusive tea set that takes after the popular fictional series. 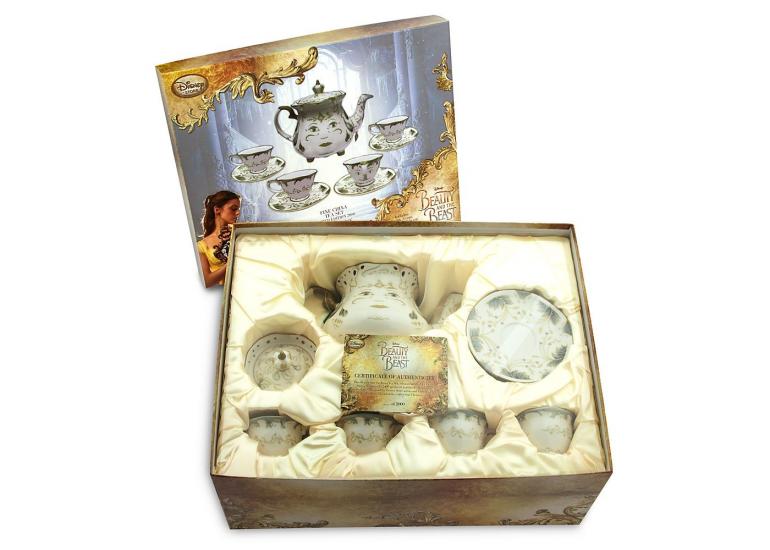 In the Disney Tale, household objects are infamous for coming live and being royal talking items that certainly cannot be ignored. We are talking about the much loved Mrs. Potts and Chip and their animated film depictions in the 90s. Brining you the on -screen versions in a tangible form, Disney puts on sale a complete china set that includes the Mrs. Potts teapot, the Chip cup plus three additional cups, and four saucers. Unlike their ordinary fictional appearance, they gain a rather royal form as part of the real Disney chinaware. While Mrs. Potts features an attached golden loop with green ceramic feather charm and cut out detailing around the rim and lid, the Chip cup and his companions come adorned with liberal decorations in gold.

For making you feel like royalty in your own right, this exclusive fine china “Beauty and the Beast” tea set retails for $249.95 and is available only in 2000 limited editions. While the kingly chinaware may not be dishwasher or microwave safe, it certainly spells class for all Disney fans. Available officially on the Disney Store’s website, the tea set will be made available to buyers in an elegant presentation box with satin lining.