At Milan’s Design week 2012, Kartell went rock with an armchair creation by superstar designer and musician Lenny Kravitz that is said to be available for sale by the end of May 2013. The Mademoiselle armchair was created by a contemporary French designer Philippe Starck for the home brand Kartell. Starck asked Kravitz to interpret and redress the Mademoiselle chair for Kartell, which gave birth to six untamed Mademoiselle Armchairs, a true reflection of the singer’s iconic style. With this collection, Kravitz had made his debut at Milan’s Design Week last year. 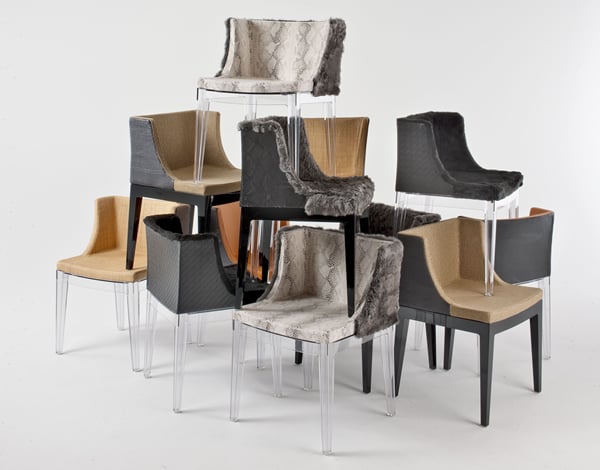 To find another creative outlet other than music, the American star had started his own design company in 2003. Therefore, the armchair was just another opportunity for Kravitz to play with fabric and style. The Kravitz Design take on the Mademoiselle armchair was turned into an haute couture meets rock and roll as the Kravitz and Starck chose various peculiar and interesting fabrics from exotic finishes of python, fur, leather, and more.

The “Mademoiselle K python” is a combination of faux fur gray python print fabric in black and gray, while “Mademoiselle K fur” has a back of black woven leather with the front covered with faux fur that is black as well. These Philippe Starck-designed and Lenny Kravitz dressed armchairs are priced at £611 ($950) each.

Tags from the story
Chairs, Furniture