It’s bold. It’s rich. And it’s the colour of choice in this Plateau Mont Royal condo, located in one of Montreal’s most coveted neighbourhoods. Aubergine pops up on a wall in the dining area, on kitchen cabinets and in brighter versions on sofa cushions. 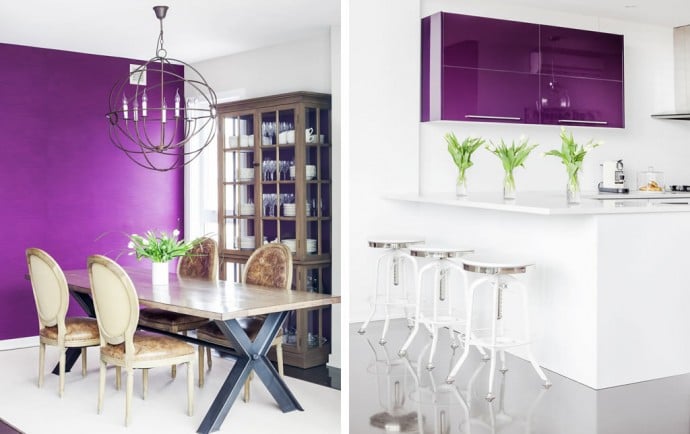 “I started with aubergine as a colour be – cause it’s classic and it’s also got a punch,” says designer Manon Bélanger of Manon Bélanger Interior Design.

Homeowners Michel Waechter and Josée Roussin, whose tastes (his modern, hers classic) compete, appreciated Bélanger’s use of colour, along with her other valued contributions to their home.“It’s so complete,” says Michel of the designer’s work. “From looking at plans to modifying rooms and from colours to furniture and lighting.”

The couple and their three children –aged 17, 18 and 20 –moved into the 2,400-square foot newly built condo last year in an area of the city that for them was very different from their former Westmount address. Michel says his family loves the Plateau for its multiculturalism, its shopping and its nightlife. “We wanted to be in the centre of the city. In Westmount, everything closes up at 5 p.m.,” he says.

During the construction of the 27-unit condominium project, Michel and Josée purchased two units that the builder agreed to turn into a single penthouse. The two lawyers then sought some counsel. “We knew Manon from Westmount and we called her to show her our plans,” says Michel.

Bélanger came up with a design that separated the sleeping areas from the rooms in which people gather.“I put the four bedrooms at the four extremes so you can come together in the living areas in the centre of the home,” she says.

The designer located the dining area where a bedroom had been.That meant that a wall that bordered one of two living areas could come down. And that put more focus on the star of the room: a semi-circular glassed-in space. “It’s already the focal point and what you notice when you walk in. Opening it up made it better,” says Bélanger of the room located inside a glass turret that runs the height of the building.

The white furniture and window frames add to its contemporary feel and the curved sofa, found at Roche Bobois, seems to have been custom-made for the space.A circular coffee table and white tub chair complete the theme.“At night it’s beautiful,” says Bélanger, who installed recessed led lights in the living room’s ceilings. “And no neighbours can see in.” While the glassed-in circular sitting room has a contemporary ambience, a second living room has a more restrained character, with its colour scheme restricted to black, white and tan. But Bélanger, ever the bridge-builder, brought some folly to the space that could have become too sombre without intervention. A cowhide-upholstered armchair and a hide-covered ottoman that serves as a coffee table are accompanied by a tan leather sofa. “I also modernized it with a black wall,” she says, and points out that an upright piano in the room injects some contemporary style, thanks to its shiny black-lacquer surfaces.

The couple love both rooms, with the more sombre living room serving as a place to watch tv and the glassed-in living room as a place that’s great for reading or talking, even on a sunny day. “There’s no direct sun,” says Michel. The open space also comprises the kitchen, its modest dimensions mitigated with ample space around its island.“The kitchen was redesigned so you can work on all sides,” says Bélanger.

She says the pops of colour are easily replaceable; if the owners get tired of aubergine, they can simply change the facades of their cabinets, repaint a wall and replace some cushions. The bathroom boasts radiant under-floor heating. The lighting fixture was designed by Arturo Alvarez and bought at Au Courant Lighting. The ceramic motif was designed by Manon Bélanger and manufactured by Ciot. Make-up table: Zone. I put the four bedrooms at the four extremes so you can come together in the living areas in the centre of the home. “ “ The couple say Bélanger’s advice throughout the year-long design process helped them realize what they wanted. “We like to decide on things and be involved. And we know what we like,” says Michel. “Manon would come to us with a few choices and they were always good ones.”

One of them was that magic colour, which helped bring some Westmount to the Plateau.

For more articles on luxury lifestyle and interior design, subscribe to Movato Home Magazine. Sign up for your free subscription here: