The magnificence of enormity might read intensely rhythmic but that leaps true when you behold the Godzilla waterfalls of South America, the Iguazu falls. It consists of a 2.7km brink with 275 individual waterfalls and cascades on the river Iguazu. And the most interesting feature is that it is split between two countries – Argentina and Brazil (where most of the course of the river flows through). The border between these two nations runs through the Devil’s Throat – the highest waterfall in the series. The falls are also shared by two national parks on either side – Iguazú National Park in Argentina and Iguaçu (Iguassu) National Park in Brazil. And within the Iguassu National Park resides one, and only one, hotel – the beautiful Belmond Hotel das Cataratas. A Portuguese-colonial residence, this classic luxury hotel boasts an unrivalled location just a short stroll from the sensational waterfalls. Luxurylaunches got some great tips from its concierge on the best ways to enjoy this idyllic, world heritage destination.


Top Day Trip – The Morning Walking Tour/ Macuco Safari Tour
The Morning Walking Tour along the pathways of the Iguassu National Park is an exclusive treat for guests at the Belmond Hotel das Cataratas. It is a unique experience because the tour starts before the park opens to visitors. The hotel’s naturalist guide will provide an informative and interesting time describing the wonderful flora and fauna of the Park.
Macuco Safari tour offers a different way to admire the famous waterfalls in the Iguassu River. The tour begins with a 3km ride in electrical vehicles with open wagons that offer panoramic views of the rainforest trail. Following this, guests can gear up for a 600 metres walking in the rainforest on a wooden path. The third part of the tour will take you to the river, where there will be a bi-motor boat ready to take you upstream for around 4000 metres, so that you can almost touch the falls. During the boat ride the pilot stops twice for pictures. The pilot will then manoeuvre the boat to give passengers a refreshing shower in a fall called “Three Musketeers”. 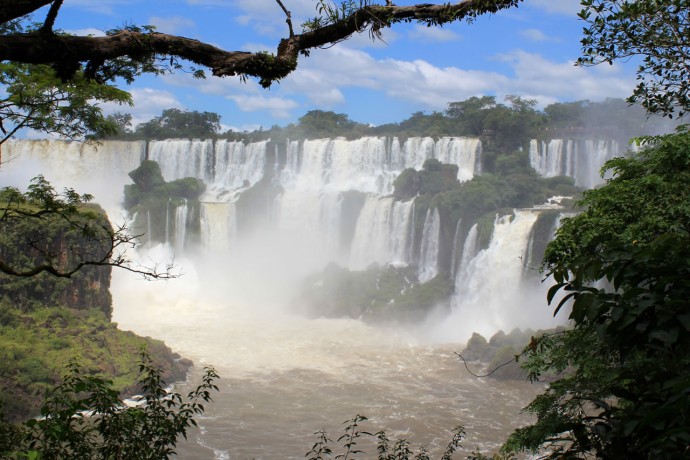 Across the border – the Argentinian side
At Argentinean side you will find a different, more intimate perspective of the beauty of the fall as well as being closer to the Devil’s Throat. A train carries guests from the gate to the falls. There is a choice of three circuits – Upper Circuit which is 1,100 meters and leads you very close to the Devil’s Throat. The Superior Circuit, with 650 meters length each passageway and without steps, you walk over some falls and see the canyon from the Brazilian side of the Falls and the Hotel. The Lower Circuit, 2,500 meters long and some steps, it takes you to the feet of some of the main falls such as the Salto San Martín and Salto duas irmãs, Two sisters in English, besides providing one of the most beautiful scenery of the Argentine National Park, there is also the panoramic view of Salto Bossetti – one of the seven natural wonders of the world. 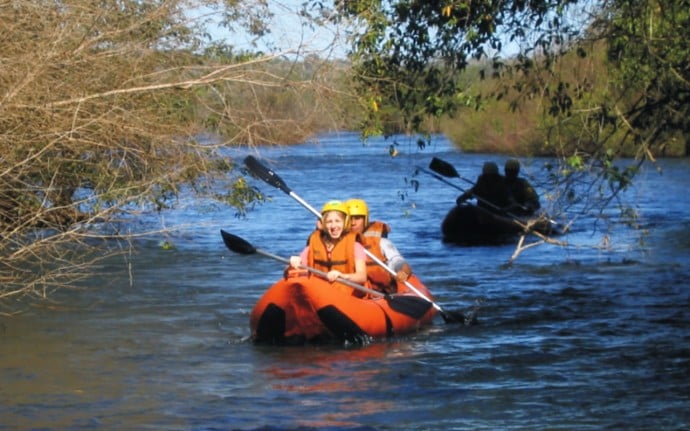 Best Activity/Excursion – The Black Well Trail
A shallow area of Iguassu River, where the water looks black like the bottom of a well forms the Black Well Trail. For those seeking a thrilling eco-adventure, the tour offers a genuine rainforest experience, both on land and water. It can be done three times during the day. The Poço Preto (Black Well) tour begins with a nine-kilometre trail offering three options – on foot, by jeep or by bicycle – on request. As you go through the rainforest, the guide will point out the highlights of the fascinating flora and fauna surrounding you.
Arriving at the river you cross a small inlet on a suspended bridge and go up in an Observatory Tower. From there you will have a bird’s eye view of the ‘Lake of the Caimans’, a shallow muddy lake teeming with birdlife and the occasional caimans. After that, the tour continues by motor boat, for 10 kilometres at the calm part of the river, providing you the opportunity to have a great view of the many hundreds species of birds, as well as capybaras.
In the last 2km stretch of the tour, you can burn some more calories by rowing an inflatable kayak. At the end of the river tour, the boat stops on the Bananeiras pier, where visitors can finish the tour walking 1.6km in a trail or by jeep. The best way is on foot because the trail is neither long nor difficult and many times, there are chances to see the local fauna like butterflies, monkeys and agoutis (a seed-disperser rodent).

Best Family Activity – Bird Park
Located near the entrance of the Iguassu National Park, the Bird Park is the most important breeding centre for birds in South America and is fully-integrated into the natural environment, with trails that meander through the tropical forest and spacious aviaries. Toucans, parrots, hummingbirds, flamingos breed and flourish together in musical harmony. The Bird Park is also home for marmosets, alligator and snakes, and a butterfly house which houses more than 25 species of native butterflies. The Park receives birds captured in illegal situations by the federal police. Many of these animals arrive in poor condition, requiring special care and are kept under observation. During the visit, you can marvel over 900 rare and colourful birds, divided into 150 different species, most of them native from the surrounding forest. 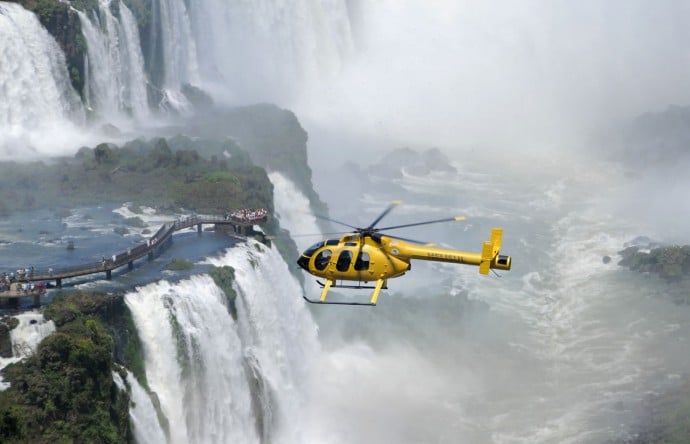 Best View – Helicopter Flight
The most spectacular way to see the magic of Iguassu Falls is a 10-minute helicopter tour where visitors fly over the giant Iguaçu National Park, which extends beyond the eye can see. The cut-outs of the Iguassu River amid the forest draw a route and disappear in clouds of spray from the falls. The helicopter circles the fall several times, allowing you to appreciate the nature and take great pictures. Seeing this natural phenomenon above, the feeling is a breath-taking experience that will remain in your memories for a lifetime. Also available are, 35-minute flights not just flying over the falls, but also the Three Borders Landmark, where the match between Brazil, Argentina and Paraguay can be seen, the Itaipu Dam, the largest hydroelectric power plants in the world, and the city of Foz do Iguacu.

Top Architecture Find – Casa Ecológica de Botellas
Unlike most places with historical and contemporary architectural wonders, here you will find something that is quite unique … and a little quirky. It doesn’t come rich with tradition, as much as a message on environmental conservation. A short distance away, 200m to be precise, from the falls is the Casa Ecológica de Botellas or the Ecological Bottle House. It was built by a family of craftsmen using packaging materials including plastic bottles, juice cartons, aluminium cans, Tetra Pak packages, glass containers and so on. The house is part of a project to raise environmental awareness in schools and around town. While there you would want to pick up some interesting handicrafts made from similar materials.

Must see attraction – Itaipu Power Plan
Built on the Paraná River between Brazil and Paraguay, forming a neutral zone between the two countries, which in Itaipu Guarani language means “Stone that sings”, is the largest hydroelectric power generator in the world. The concrete used to build Itaipu is equivalent to 210 Maracanã Stadiums and the iron and steel used is equivalent to 380 Eiffel Towers. This is the Itaipu dam – A giant with 14,000 MW of power, capable of producing 95 million kilowatts / hour per year. The spillway capacity is 62,000 cubic metre/s; approximately 40 times more than the normal flow of the Iguazu Falls. It can offer a range of attractions, providing an unforgettable visit, knowing closely the junction of art and technology, in addition to environmental actions taken in area. Tere are bus tours to enjoy this gigantic beauty; however, the gigantic Itaipu is even more noticeable when you pass along the top of the dam, where it has a privileged view of the reservoir. A special tour allows the visitors to know the inside of the dam. The main features are the architecture, whose concave shape is reminiscent of a cathedral, and the old bed of the Paraná River. In the production building visitors have the opportunity to see the central control room, which controls the operation of the turbines and generators. Note that the Special Circuit is performed in an industrial area and for the safety of visitors, only people over the age of 14 are allowed. It is also mandatory to wear long pants and closed shoes. 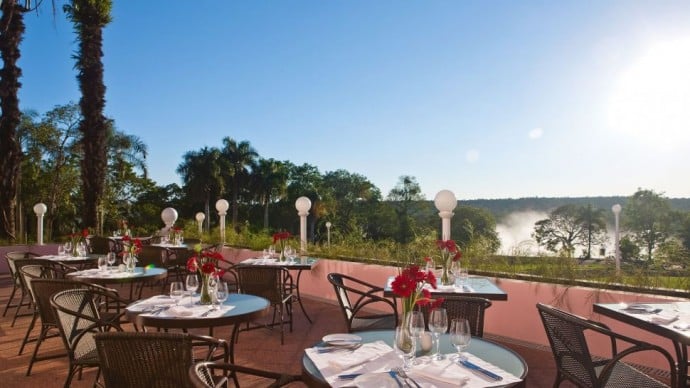 Best Restaurant/Cocktail with a View
Fine dining Itaipu Restaurant at the Belmond Hotel das Cataratas offers a blend of Brazilian-international fusion dishes with the backdrop of the majestic falls. The exquisite spread and the breath-taking views from its veranda have made Itaipu a popular destination for visiting foodies.
Another restaurant known to be a romantic location is Bocamora which overlooks three nations. It can be reached just down the hill from the Argentine border marker. As well as stunning views, you can enjoy specialties like grilled meats and well-prepared plates of river fish.