If you are the sorts that can fathom traveling the space aboard the Virgin Galactic, then space tourism is not a new concept to you. Naturally, when you’ve finished globetrotting, then space-ventures is next on the cards. And of course, you’re gonna need a place to stay up there, so good folks at Bigelow Aerospace are building one for you. They have adapted the TransHab, a never-used NASA design for an inflatable space station called the Nautilus; the module will provide 330 cubic meters of living space for space tourists or industrial researchers.

Bigelow plans to launch the first habitable Nautilus in 2008; the company has already launched prototypes of its inflatable space hotel rooms that are slated to be open to the public in less than a decade. 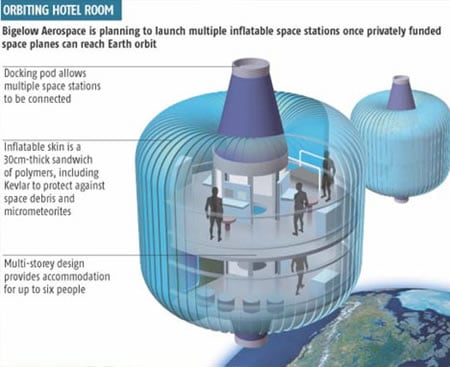