With the upcoming Four Seasons Maldives Surfing Champions Trophy 2013, the resort has an offer to suit all the wave-crazy fans coming to enjoy the waves or watch the 6 ex-world champions battle it out in the ultimate showdown to win $25,000. The Surfing Champions, as well as Domestic Champions contests, will be hosted aboard the luxury Four Seasons Explorer. The package for groups of surfers by the Four Seasons Resort Maldives at Kuda Huraa is a minimum of four rooms for seven nights to enjoy the world’s most consistent and warmest swells. The package features an expert tropical surf school guide, luxurious oceanfront accommodations, and a chance to sail to the best breaks of the day in awe-inspiring surroundings. If you go during the championship competition, guests can have a chance to watch the action with day passes aboard the floating hotel, the Four Seasons Explorer. 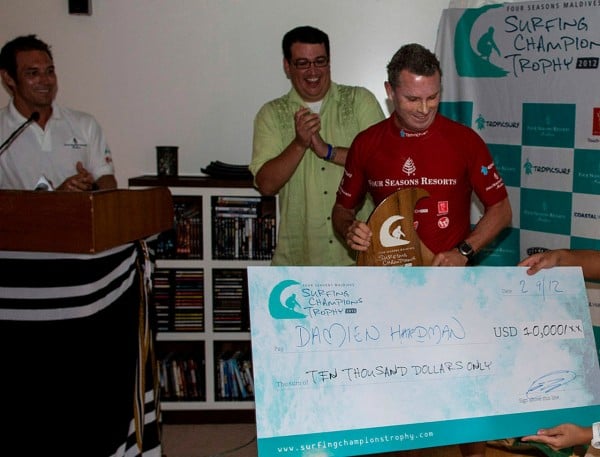 This August returning for its third successive year, the Four Seasons Maldives Surfing Champions Trophy 2013 has gained its reputation as the world’s most luxurious surfing event. Organized in collaboration with luxury surf pioneers Tropicsurf of Noosa, Australia, this year’s event will simultaneously hold the Four Seasons Maldives Domestic Championship Trophy, displaying local talent. The most hotly anticipated return to the Surfing Champions is an Australian surfing legend and two-time world champion Damien “Dooma” Hardman to defend his title. Hopefully, he claims to scoop the $25,000 while enjoying Kuda Huraa’s surroundings with his wife.

With all the competitors, judges, and spectators staying on the Four Seasons private island resort, the company of people on the water will spill onto the beach each night over drinks and dinner.