There are many categories of hotels present in the world today. From the Business hotels to the Budget ones, each of them tries to offer their clients something that will want them to come back again. Featured here are hotels that are being made with only one main base- their unique location and design. Some of them are just concepts but others are shaping out to become truly futuristic. Water and space are two elements that have taken the fancy of the developers, as you will notice, most of the hotels are either situated below the sea or above the earth!
8 The Apeiron island hotel
This seven-star hotel is still in its conceptual stage. It is $500million project that is being designed by Sybarite. This island hotel will have a total floor area of 200,000m². With over 350 luxury apartment suites, the hotel will be accessible by water (yacht) and air (helicopter) only. ‘Apeiron’ hotel gets its name from Anaximander’s 6th century BC cosmological theory. He believed the beginning of time to be an endless, unlimited mass, subject to neither old age nor decay; perpetually yielding fresh materials from which everything we can perceive are derived. Private lagoon, beaches, restaurants, art galleries, retail shopping, cinemas, spas, and conference facilities will be there for you to enjoy. 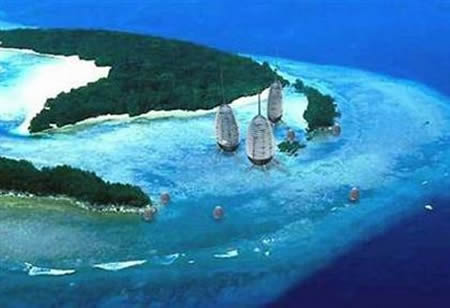 7 Foldable hotel pods
A foldable pod on stilts which can be set down in remote locations, now that’s a pleasant thought! The Foldable hotel pods will be self-sustainable, and you can even choose the images you want to be projected on the walls. And when you tire of that spot, just fold the pod and take it to the next hotspot! Designed by m3 Architects, London, the pods would cost between $72 to $104 million to build. 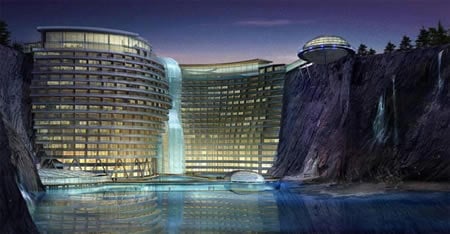 6 Waterworld
Still in its conceptual stage, the Waterworld (not the Kevin Costner film), is designed by Atkin’s Architecture Group. It won the first prize award for an international design competition with this stunning entry. To be built at a magnificent water-filled quarry in Songjiang, China, the 400-bed resort hotel will feature underwater public areas and guest rooms, cafes, restaurants, and sporting facilities. “Extreme sports center for activities such as rock climbing and bungee jumping, which will be cantilevered over the quarry and accessed by special lifts from the water” has been included in the design. 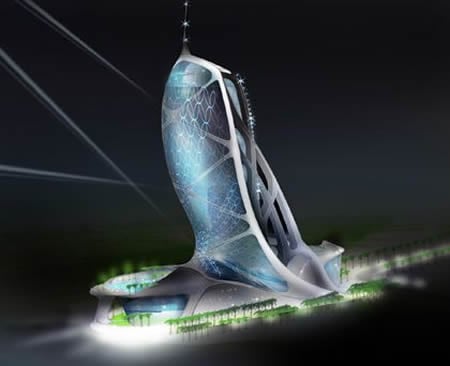 5 The Hydropolis Undersea Resort
Proclaiming it to be a10-star underwater hotel, the Hydropolis Undersea Resort a $500-million project designed by Joachim Hauser, Crescent Hydropolis Resorts. Located in Dubai, this underwater hotel has been designed with this base that 60% of our surroundings is water. The 1.1-million-square-foot of the area offers you a shopping mall, ballroom, island villas, restaurant, high-tech cinema, a missile-defense system for your security 60-feet underwater, and 220 themed suites. The petal-like retracting roof is designed to organize open-sky events. Though the project has been delayed a bit, if Murphy’s Law doesn’t create havoc here, then we can expect the hotel to open up very soon. 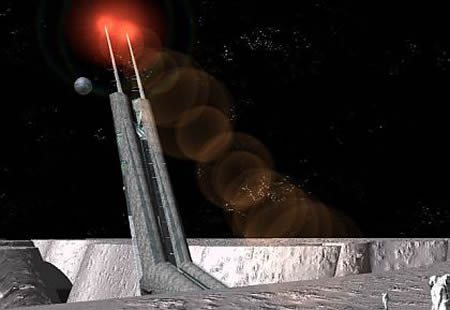 4 The Lunatic Hotel
Don’t dream of stars, live on a satellite instead. The Lunatic Hotel is all set be built on…you guessed it; the Moon! Designers Hans-Jurgen Rombaut and Wimberly Allison Tong & Goo (WATG) have the Blueprints ready and hopefully the hotel will be ready by 2050. The ‘sensation engine’ as described by the designer Hans-Jurgen Rombaut of the Rotterdam Academy of Architecture in the Netherlands will allow guests to “indulge in low-gravity games with the help of two 160-meters high slanting towers.” The 50 cm hull made from Moon Rock layered with water will provide the antidote to the ruthless lunar environment, extreme temperatures, lethal cosmic rays, and solar particles. 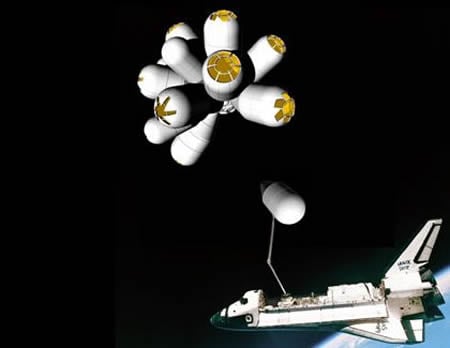 3 Galactic Suite
The prototype of the Galactic Suite is ready but put on hold. The designer Xavier Claramunt of ADD+ARQUITECTURA has perceived the Galactic Suite as a 22-room hotel each measuring 7X4 meters. Devoid of straight lines or angles and huge windows, it features numerous capsules that act as bars, restaurants, reception, and more. 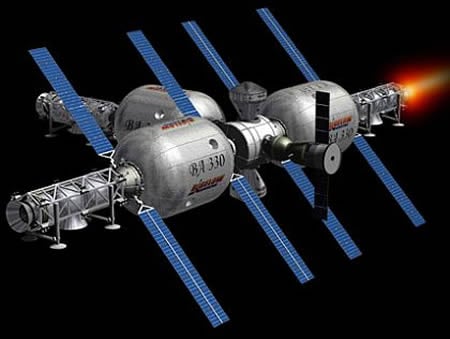 2 Commercial Space Station Skywalker
Commercial Space Station Skywalker is an inflatable space hotel designed by Bigelow Aerospace, Las Vegas. To be located 515-km above Earth, it promises to offer a truly cosmic experience. The estimated project cost is $500 million but renting a night out at the hotel will set you back by $1 million. The initial phase, Genesis I was launched from Russia last year. Milking on Solar power, the basic design involves taking inflatable parts and fixing them together in space. Moon Cruises are some of the future amenities to be provided and certain sections of the CSS will provide docking space for rockets. The hull of each module is made of three protective layers with an outer 18-inch-thick shield made of alternating woven graphite composite and foam to protect against orbital debris. The human space complex will be accessible by 2015. 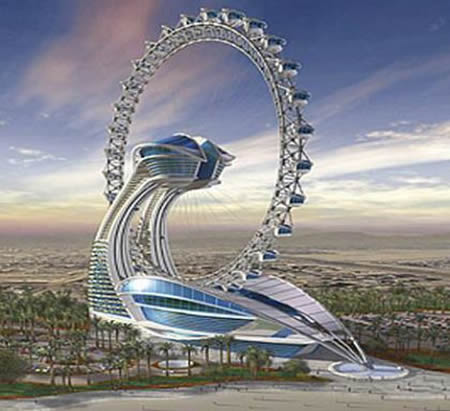 1 The Diamond Ring Hotel
The Diamond Ring hotel is to be located in Abu Dhabi. Little is known about this conceptual project, but if the pictures are something to go by, then this hotel rocks!