London, UK: playground of the rich and famous. London is well known for its fancy eateries, theatres, clubs and lavish hotels. Celebrities from around the world visit London to have some downtime, letting their hair down in a Soho night-club, eating the finest cuisine at The Ivy, or visiting world-class museums in Museum Row.

Many also come to London for work. Pinewood studios can be found just outside London, and there are many business and financial institutions in the city, as well as flagship stores and many world class events attracting the rich and famous.

Visitors from all countries and all walks of life visit London, but what do they all have in common? They will all need somewhere to stay. There are many high end, opulent and luxurious hotels in London, and visitors will choose where to stay based on a number of factors, such as location, amenities, and reputation.


Casino Hotels
Casinos have often been purported to be the epitome of luxury, often associated with glamourous hotels, celebrities in Monte Carlo lolling around a poker game, and the rich and famous getting together to spend, lose, and win vast sums of money.

Many luxury hotels, one of which is discussed here, have their own casinos, adding to their offering and luxury feel. Most of them will offer a combination of table games and slots, with popular offerings being poker, blackjack, roulette, baccarat and various themed slot machines. However, for many, playing in such exclusive locations can be far too costly, or simply, as in the case of the Ritz, open to members only, so it can be more accessible to access casinos online to play their favourite game such as blackjack or poker.

Online casinos have leveraged technology to provide a highly enjoyable and immersive experience to players, that, though not the same as a real life casino, offers a similar experience with a number of added benefits, such as being able to access games any time, and from anywhere. 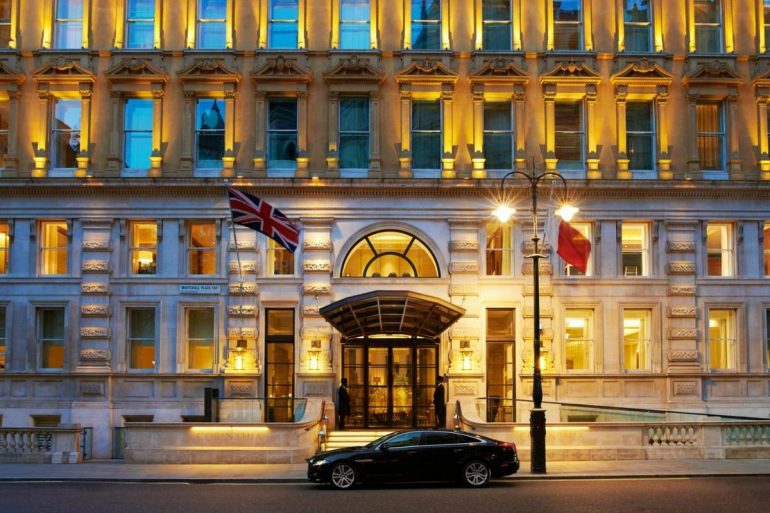 Corinthia Hotel
Located near Trafalgar Square and the River Thames, the Corinthia is one of the finest five-star hotels in central London. The sheer scale of the building has a wow factor, and guests can take advantage of the pool, spa and sauna for some much-needed relaxation, as well as top notch food from some of the finest chefs working at the moment, including Tom Kerridge’s Bar and Grill. 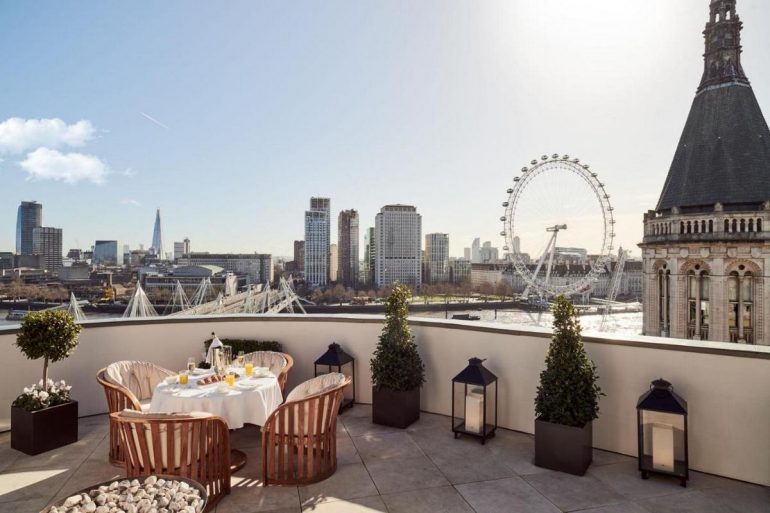 The Corinthia also has a family-friendly aspect, offering adjoining rooms with a hefty discount, as well as children’s gifts on arrival and consoles in the rooms. Additionally, the hotel was featured in the 2018 blockbuster Red Sparrow, with actress Jennifer Lawrence holding a photo shoot for the film in the hotel. And it was also the location for the James Bond film Skyfall’s press conference in 2011, adding a touch of glamour and exclusivity. 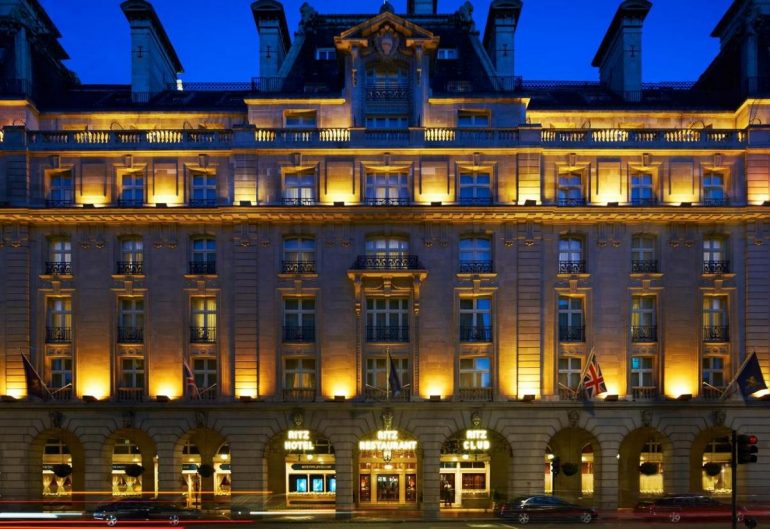 The Ritz
The Ritz is the epitome of luxury. Situated a stone’s throw from Buckingham Palace, it is the place to be: if it is good enough for the queen, it is good enough for anyone! It also provides easy access to some of London’s most famous Museums, like the Victoria and Albert, the Natural History Museum, and the Science Museum, as well as being close to the Royal Albert Hall and many of London’s loveliest green spaces.

Opened in 1906, the Ritz has welcomed all manner of celebrity and notable figures, like the British Prime Minister during the war, David Lloyd George, writer Barbara Cartland, and actor Charlie Chaplin. It was also where Prince Charles and Camilla had their first outing following the death of Lady Di, and wherein 2002 Charles has his birthday party, attended by the Queen and Prince Philip. 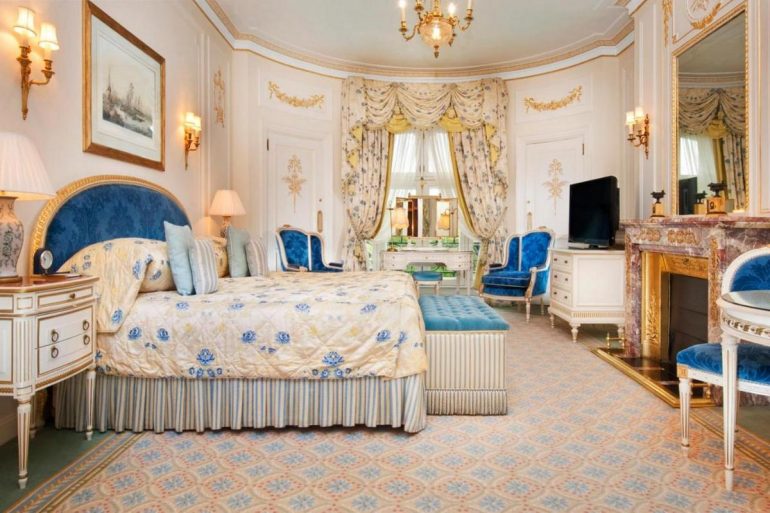 Guests can enjoy airport transfers in a chauffeur-driven Rolls Royce Phantom EWB, a visit to the exclusive spa and beauty rooms, several restaurants, and exclusive gardens. The Ritz is also home to one of London’s most exclusive casinos, The Ritz Club. It is an elegant casino located in the basement of the hotel. There are many table games on offer, but also private gaming rooms, and is open 24 hours a day, seven days a week. The only catch is that only members of the club can play, and membership costs a hefts £1000, and applications must be approved by The Company. 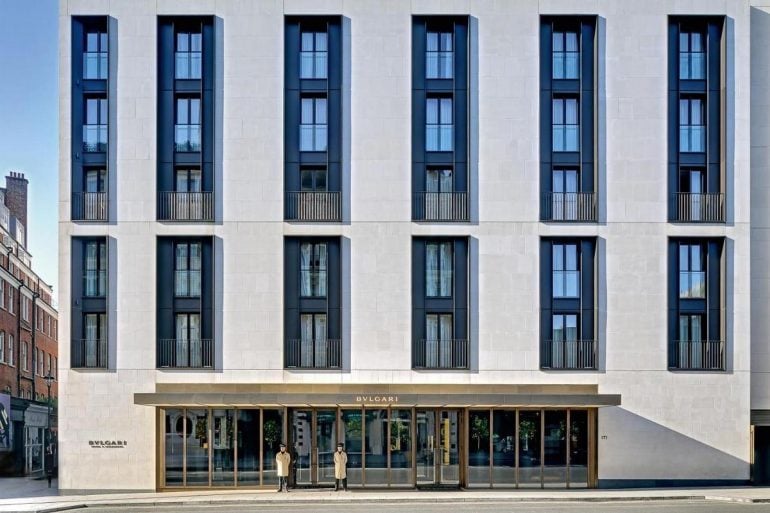 The Bulgari Hotel
Bulgari, a name often associated with glamour and opulence, brings a luxurious and somewhat understated offering to the London Hotel scene. Located in Knightsbridge, this is the perfect location for a shop and flop, ideal for the shopaholics. Small independent boutiques and flagship stores surround the hotel, not to mention Harrods are just a short walk away, as is Harvey Nichols. Visitors can buy pretty much anything their heart desires, from clothes and make-up to cars and coffee machines. 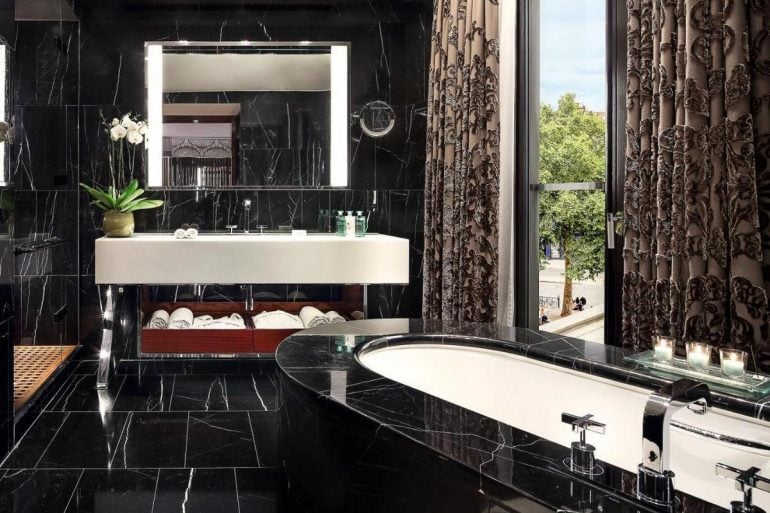 There are five underground levels to this hotel, offering a spa, steam rooms, and saunas, a swimming pool with loungers, and a well-equipped gym. For those looking to host an event, there are a number of rooms available for hire, including a massive ballroom, complete with piano and designed for excellent acoustics. The rooms have Nespresso machines as standard as well as a mini-bar and large TV. An upgrade to one of the bigger rooms comes complete with butler service.