For those who have a take-off or flying phobia, Holand’s Honekar hotel is the best place to fulfill that final fetish of being in a flight setup. The hotel is furnished within a 1960’s vintage, 4-engine jet plane and is perched on the edge of the runway at Teuge airport. (East of Amsterdam) The converted Ilyushin 18 is the brainchild of Dutch entrepreneur Ben Thijssen. It has all the facilities of a five-star hotel- a whirlpool, sauna, bar, kitchen, flat-screen televisions, wireless internet without even leaving the ground! The plane was the Soviet Unions’ most widely used government aircraft to ferry East German officials during the Cold War, one of them being Erich Honekar, after whom the hotel was named. The 40-meter long suite hosts about 15 people for a conference meeting and charges about $500 for 2 people a night.

The plane was discovered by Mr Thijssen in the village of Harbke, in the German state of Saxony-Anhalt, where it was employed as a restaurant that didn’t earn good revenues, resulting in to closure of the same. He picked up the potential scrap for a bargain price of $35,600 and spent another $640,200 on renovating and refurbishing it into a 5-star hotel. The hotel would have had better prospects without the runway noise and with better landscaping. 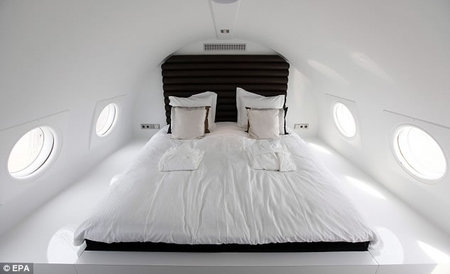