The Peninsula Beverly Hills luxury will now serve its guests a bespoke beer entitled The Lion and the Mouse, made specifically for the hotel by craft brewery Mad Fritz in Napa Valley, CA. The hotel will celebrate the launch of the brew with a tasting dinner under the stars on The Belvedere patio hosted by Mad Fritz founder Nile Zacherle.

Available from August 1, the limited edition beer will be served exclusively at the hotel’s Club Bar. This will be the first time that Mad Fritz has been available outside of Napa Valley and The Peninsula Beverly Hills will be the only location worldwide that will serve The Lion and the Mouse on its menu. The Lion and the Mouse is a Belgian-style abbey ale, or dubbel, that is brewed using single variety barley, Full Pint. The brew offers aromas that are both spicy and fruity, followed by a biscuit-maltiness with subtle oak tones. It is uniquely bottled from a single barrel and naturally carbonated through secondary or tertiary fermentation. Created like wine, by wine makers.

And served like wine too. The premium beer will be presented in a crystal stemware and served alongside a seasonal, specially created bar snacks such as Roasted Wild Boar Sausage in a Blanket with house-made mustard.

Each of Mad Fritz’s distinctive brews is inspired by Aesop’s Fables. The Lion and the Mouse is named after the story where a mouse accidentally rouses a lion from his sleep. Trapped, the little mouse pleads for his life, promising one day to return the favor. Amused, the lion sets the mouse free. Shortly afterward the lion is ensnared in a trap and left roaring loudly in dismay. Recognizing the roar, the mouse hurries to his rescue, gnawing the majestic beast free. The moral: do not doubt that little friends may prove great friends. This story celebrates the friendship and collaboration between the hotel and the brewery.

READ:  LA International airport is all set to become better and possibly world class with a $5b makeover 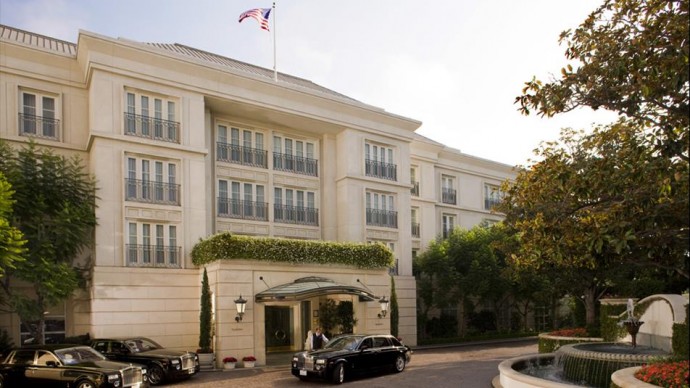 Guests can join in the hotel’s special beer-tasting dinner at the property’s restaurant, The Belvedere, on July 23. For one night only, the stunning patio will be transformed into The Belvedere Beer Garden where guests will sample a hand-picked collection of brews that have never before been available outside of Napa Valley. Executive Chef David Codney will also showcase a menu that pairs with each signature brew. The four-course dinner is priced at $150, exclusive of taxes and gratuities, and includes a flight of five beers.

Alternatively guests can sample The Lion and the Mouse at The Club Bar at The Peninsula Beverly Hills. A 785 ml bottle is priced at $45 and includes a bespoke bar snack.