After launching their first European property in Paris last year, Hong Kong’s Peninsula Hotels has announced its second property in London, in the city’s Belgravia neighborhood set to be open in 2021. The company got its green signal from the Westminster City Council for the construction of the £500 million ($758 million), 190-room hotel overlooking the gardens at Buckingham Palace in central London. The new hotel designed by Hopkins Architects will stand in place of what was once a 1950s -1960s office building. 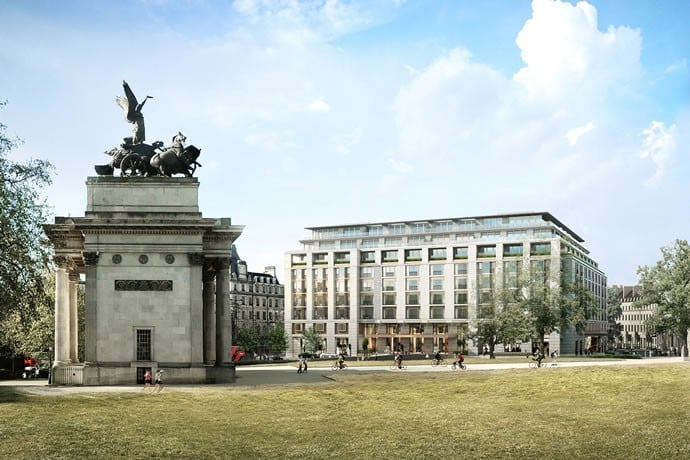 The Peninsula London will feature a colonnaded walkway and main pedestrian entrance on Grosvenor Place and an internal “palazzo-style” courtyard. The complex will include shops, a spa, a ballroom and up to 28 residential apartments with a separate leisure and spa facility, reception and entrance on Halkin Street. Plans also include 23 intermediate affordable homes nearby Buckingham Palace Road. Construction is scheduled to begin in summer 2017 and will be completed in 2021.

The new hotel is a joint venture between Grosvenor Britain & Ireland and The Hongkong and Shanghai Hotels, Limited and is expected to create over 2,000 jobs and generate $91 million to the economy annually.