From being the face of yet another Architectural wonder of the UAE to being at the heart of the Abu Dhabi Formula 1 circuit, the Yas Hotel has its own identity finally as it opened its doors to visitors and guest on October 30, 2009, and that too with the tag of being the largest LED Project in the World which is controlled through an RDM (remote device management) system. Timed to launch alongside the inaugural 2009 Formula 1 Etihad Airways Abu Dhabi Grand Prix, the hotel is located at the heart of all the racing action.

This beautiful landmark has been built by Aldar Properties and designed by Asymptote Architecture. This 5-star, 500-room, 279,000-square-foot complex has a curved grid type shell which has more than 5,300 diamond-shaped steel panels, which have as many as 5000 RGBW LED fixtures.
New York based-lighting design firm Arup Lighting has used a lighting device by ‘e:cue lighting control’ to generate effects through changing colors and pre-defined 3D low-resolution video content atop the grid-shell. The hotel has a sculpted-steel vehicle to run on a passing bridge to commute between the two hotel winds even when the F1 races are on. 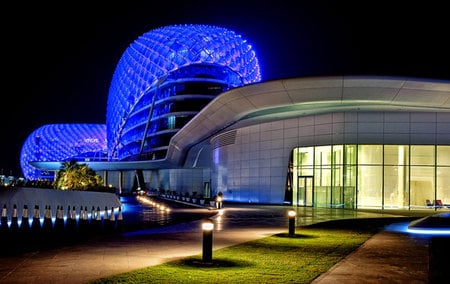