Some ad campaigns are beautiful; others are glamorous or dramatic. However, this one from Graff Diamonds manages to tick all three boxes. Back in 2013, Graff unveiled its ”Half Billion Dollar Hair & Jewel” campaign which featured a model sporting $500 million worth of jewelry in her elaborately set up hair. The ad commemorates Laurence Graff’s sixtieth year in the business and the opening of his fortieth store. 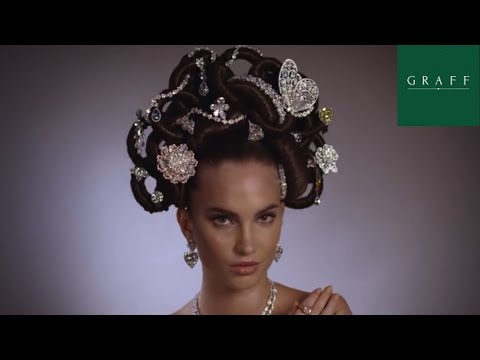 This ad is an update on a 1970 ad which featured a model wearing a million dollars’ worth of jewelry in her hair. The 1970 model had her hair coiffed in the style of the royal hair fashion of 18th-century Versailles, the more recent model sports a medusa-like hairdo studded with 22 jewels, two of which are diamond brooches with stones cut from the 550-carat Letšeng Star. She also wears some of the rarest diamonds from the Graff vault in the form of brooches, rings, pendants, bracelets and earrings.

Notable pieces of jewelry include a pink and white diamond flower brooch with pear shaped diamonds, outlined by rare pink diamonds and set on a pavé, leafy stem. Three D, flawless diamonds have been included in this brooch along with a pear-shaped, D, internally flawless diamond all cut from the Letšeng Star that originates from Gem Diamonds’ Letseng mine in Lesotho.

There are a number of other fabulous jewels that you can learn about in Graff’s video about the campaign. Watch it here.

Tags from the story
Jewelry