Beauty with brains, precision, logic, science, design aesthetics and fashion – Zaha Hadid is a melting pot of creativity. Her latest collection is something that will definitely make for a lot of jaws to drop. Zaha has designed eight exclusive pieces of jewellery for Danish design brand Georg Jensen. The Lamellae capsule collection features eight geometrically-designed pieces including rings and cuff bracelets rendered in sterling silver and black rhodium-plated silver peppered with black diamonds. This line is displayed at the Baselworld watch and jewellery show which is currently taking place in Switzerland until March 24. 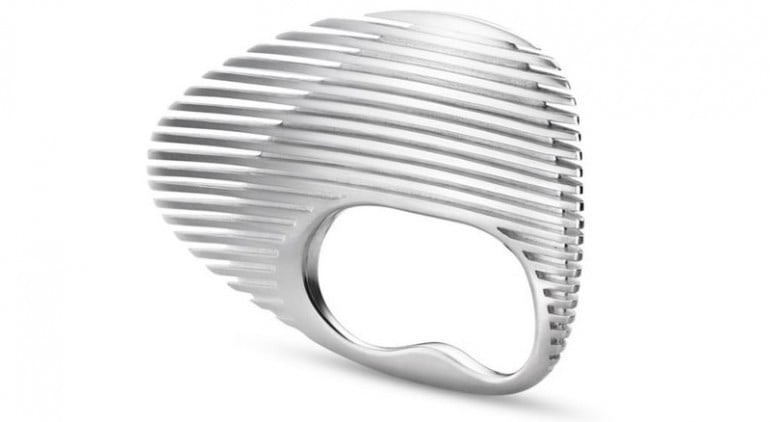 One of the rings is inspired from by Beijing’s Wangjing Soho Complex – one of Zaha’s designs. The three-tower complex is curvaceous with and resembles and ‘interweaving mountain’. It was during the opening of this project that she met David Chu, chairman and creative director of Georg Jensen. David was instantly attracted to Zaha’s jewellery that day and a connection was struck. He was convinced after a meeting with the British-Iraqi architect at her studio in London.

Zaha has also designed an installation based on this jewellery line, which is used as a lounge at the show’s Hall of Vision.

The pieces are priced between $500 and $25,000 and will be available at Georg Jensen flagship store in London and its other boutiques as well as selected wholesale stores by September.

Tags from the story
Zaha-Hadid