As we schmooze into the last few weeks of 2016, it’s time to take stock of the bounty this year has brought us. Going by the crowds spilling out of and milling around the hotspots, it appears that Mumbai’s dining and nightlife is buzzing like never before. It’s been a good year for the F&B scene and unlike other years, where big restaurant and bar openings took place only around the festive season, we’ve had a steady stream of exciting launches almost every month.

Picking just a clutch of 10 from the scores of excellent eateries opening up was a tough ask but after sampling my way through all of these, here’s my verdict… 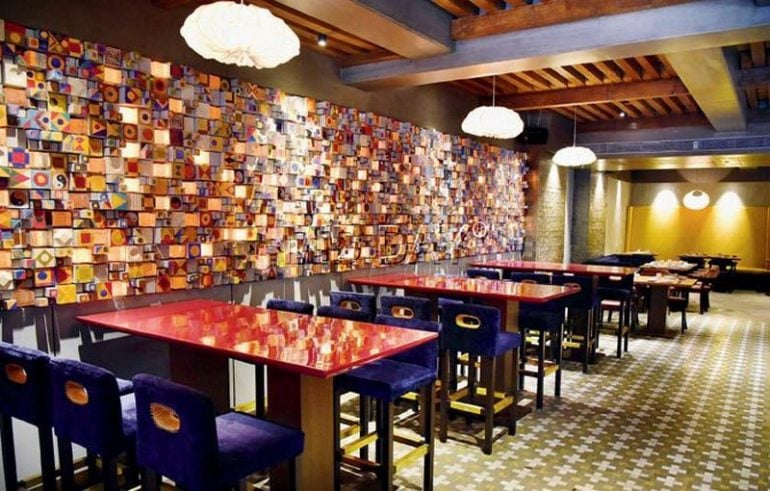 10. KOKO
Another Kamala Mills denizen is this glossy gastropub and nightspot spearheaded by Ryan and Keenan Tham of Pebble Street Hospitality. An extensive island bar, cheery interiors and excellent music ensure you’ll have a good time. The Tham brothers have not only brought back elements from Henry Tham, their father’s fine dining restaurant in Colaba, such as high-backed chairs and Aromatic Prawns for a bit of nostalgia, but also added a premium Chinese and Japanese menu designed by Eric Sifu, a Chinese chef from Malaysia.
GO FOR IT! Authentic flavours and a posh night out. The bar menu by UK-based Dimitri Lezinska of Cocktail Kings fame has an Asian twist. Try the vodka and basil cocktail called the Tom Yum Cup, delicious dim sum and sushi topped with their signature sauces. 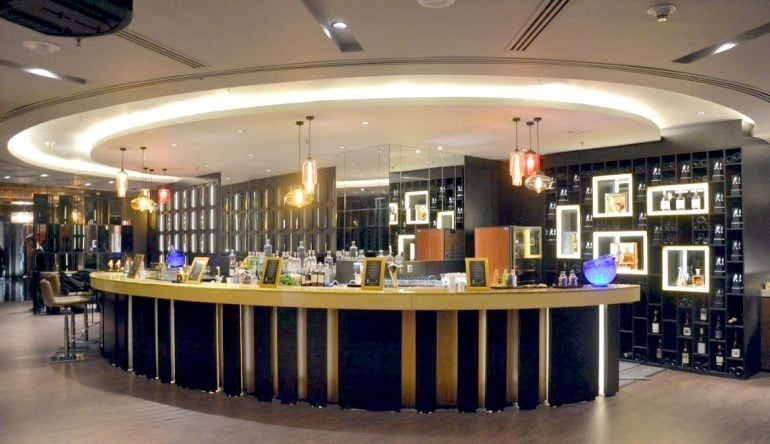 9. Dashanzi
Every Mumbai hotel worth its salt has always had to have a good Chinese restaurant. The JW Marriott Juhu replaced the Spanish Arola with the daring Dashanzi in July. Serving up Progressive Asian Cuisine curated by its Executive Chinese Chef Stanley and Executive Japanese Chef Don Don, this restaurant and lounge draws inspiration from Beijing’s chic and avant garde art district of the same name. Sophisticated dark interiors, impeccable service and a memorable menu.
GO FOR IT! The award-winning bartenders and their menu of signature Asian cocktails, sake, soju, boutique gins and craft beers. Avocado Tart, beautiful black Chive and Oscietra Caviar Dimsum, Chicken and Truffle Suimai, Braised Pork Belly served with delicious bao buns and an innovative Coconut Five Ways dessert. 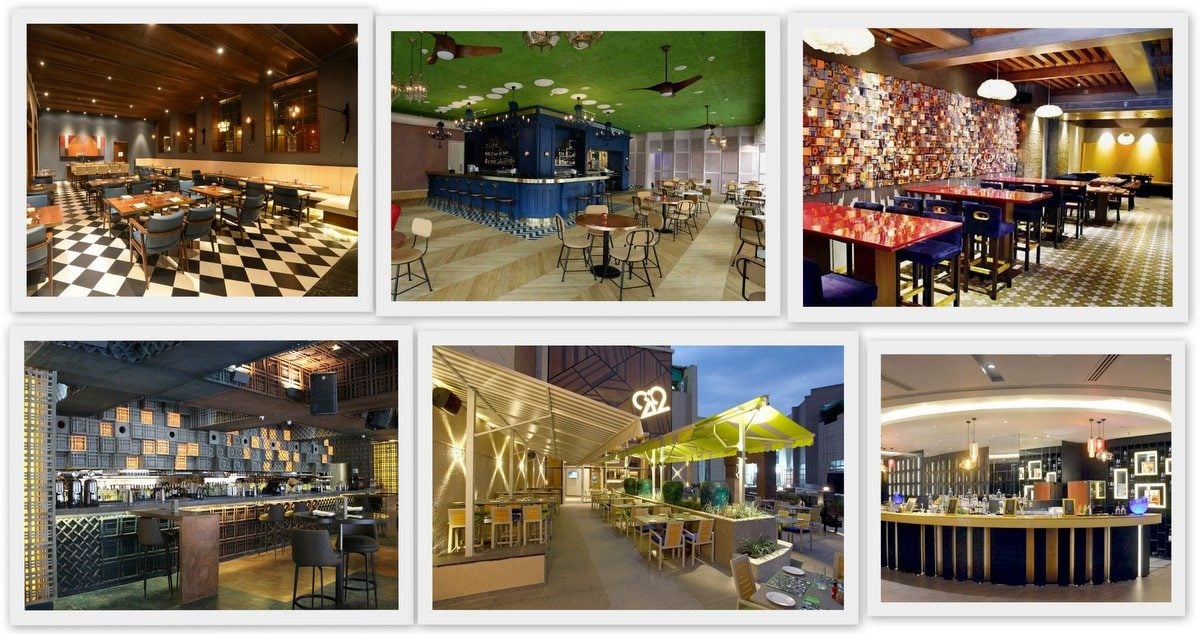 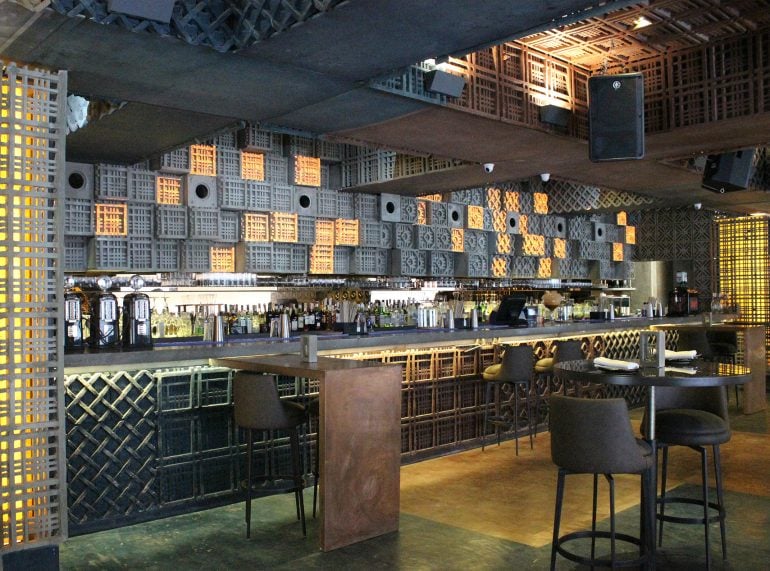 8. Farzi Café
This Delhi destination by Zorawar Kalra of Massive Restaurants has been wowing Mumbai since it opened its double doors in Kamala Mills. Most impressive is the very innovative three-dimensional wall design that is reflected in the modern Indian menu that pairs flavours and techniques from across the country with some wonderful whimsy.
GO FOR IT! The electric ambience, the Baileys Lollipops served in a ‘tree’, the smoked whiskey-based cocktail called The Three Musketeers, and favourites like the Delhi Belly Tikka and the Milky Way Big Bang dessert.


7. The Clearing House
It was once an ice factory in Mumbai’s historic Ballard Estate area, located on a street that led up to the pier where ships sailed to and from Calicut. Today, it’s a gorgeous space with two large seating areas designed by Sameep Padora and Vami Koticha that help it segue seamlessly from day to night. The Foyer with sunlight streaming in from long windows and brightly coloured paintings is the perfect backdrop for sophisticated kitty parties and luncheon dates. The chandeliered inner Chamber looks lavish and layered, just right for a romantic dinner or a family celebration. The man behind Breadbox Hospitality that’s spearheaded this is Rishad Nathani, who was a part of the core management team at Indigo.
GO FOR IT! Executive Chef Nitin Kulkarni’s forte is contemporary international cuisine and you can pick from a wide selection of small and large plates. Goat Cheese Stuffed Eggplant with Zucchini Ribbons, Steamed Arabian Sea Bass in Soya Ginger Broth, pork Belly Steamed Buns with Edamame and Honey Flan.
6. 212 All Good
Romil Ratra had a gut feeling about what people wanted, perhaps even needed. As director of Bellona Hospitality, the F&B arm of Phoenix Mills Ltd which has been actively launching restaurants across cities, he was in a position to act on his instinct. He and his long-time partner-in-thyme Chef Paul Kinny, both of whom had carried this concept in their hearts for a while before they brought it into being at High Street Phoenix in Lower Parel this October, teamed up with Chef Moina Oberoi to create a menu of familiar food and beverages using indigenous produce, free of refined flours, artificial flavours and preservatives.
GO FOR IT! Casual chic interiors and a relaxed vibe that allow the food to take centre stage. Botanical colas to nitro coffee; moringa to kefir and goji berry to adzuki bean; red amaranth porridge to nettle risotto; Andaman island tuna to Himalayan trout. Call it healthy eating that boosts immunity and energy levels or classic hipster-bait, but the menu here is as wholesomely satisfying and stylish as it can get.
ALSO READ -   Review: A taste of North-Indian perfection at Tamak 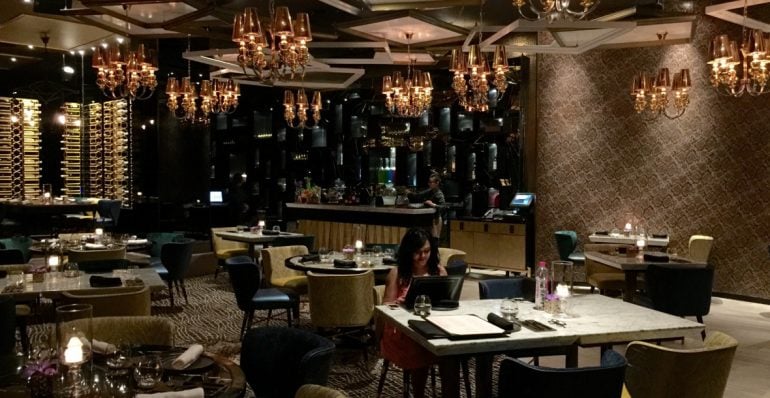 5. Luna Nudo Gusta
This experience takes you closer to the stars and also makes you feel like one. The modern luxe interiors are a feast for the senses while the space that’s divided into a restaurant and a bar gives you what you’re in the mood for. Luna Gusta offers an interactive dining experience in close consonance with the chef. Expect elevated European cuisine at an elevation of 37 floors in the St Regis Mumbai. Luna Nudo is the infusion-themed bar which is perfect for sundowners and late-nighters, with everything from signature cocktails to craft beers and a stage for live music.
GO FOR IT! People are already swearing by the Burrata and Florentine Fennel Salad and the Spanish cured ham with fig at Luna Gusta and the wild-tasting Vortex made with chocolate and spice-infused rum, home-made orange bitters and vanilla molasses at Luna Nudo.