4. Estella
It’s the city’s first fine dining restaurant serving modern Australian cuisine (which blends fresh ingredients, progressive plating and some Asian flavours) and has been set up by Hitesh Keswani’s Silver Beach Hospitality. The kitchen is in Chef Rohan D’Souza’s able and imaginative hands while the design by Sameep Padora matches the culinary creativity. The stunning island bar designed cleverly straddles the centre of the air-conditioned inner sanctum as well as extending out onto the al fresco deck so you can sip your drinks with a smattering of starlight.
GO FOR IT! The perfect blend of fresh sea breeze and fresh seafood make for a heady cocktail. Drinks are superb, the menu interesting and the overall experience is sheer romantic chic.
3. TAG Gourmart Kitchen
For standout modern vegetarian, you must try celebrity Chef Ranveer Brar’s pure vegetarian TAG Gourmart Kitchen at Kamala Mills. Set on the first level of a stylish art gallery that encourages student’s work, this cheery café is high on design. Transparent plastic chairs with colourful Warholesque backs and picture windows make it a bright and happy place to explore food that’s equally light, playful and entertaining.
GO FOR IT! A great selection of wines that pair well with multiple small plates filled with food that mixes international and Indian ingredients with oodles of flavour. Watermelon Sashimi with Yam Guacamole, Mushroom Galawat, Afghani Mantu Dumpling, Mock Butter Chicken Ravioli with Kale Saag, Palm Hearts Biryani and the Jack Fruit Tarte Tatin.

2. Masque
It’s one of the most exciting launches of this year. With a fixed menu that changes every few weeks and ingredients that are wholly locally sourced and even foraged within the country, the concept shows a lot of promise. Done up in laboratory luxe by architect Ashiesh Shah and located in Lakshmi Mills at Lower Parel, Masque is owned by Aditi Dugar and the menu created by the talented Chef Prateek Sadhu.
GO FOR IT! The ever-changing menu at the farm-to-fork fine dine means that we can’t really recommend you a dish as it may have been replaced by the time you get there. Suffice it to say, expect the unexpected. 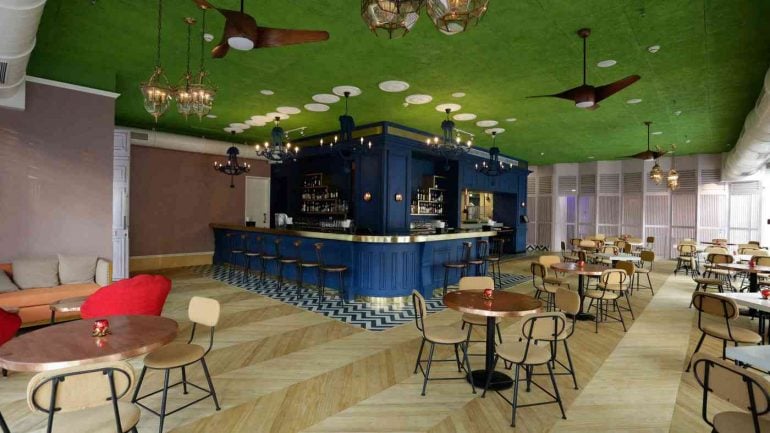 1. Lima
One of the two fab places opened in BKC by Chef Atul Kochhar, who has won Michelin stars for two of his restaurants in London, this one is set up as a picture-perfect Peruvian tapas bar and fine dining restaurant. The Lima kitchen, under Chef Jerry Thomas’s supervision, promises a superlative dining experience for both vegetarian and non-vegetarian patrons. Lima also does some Peruvian-Japanese Nikkei dishes that aren’t easily available in Mumbai and has a wonderfully blue bar area if you’re just there for a trendy tipple.
GO FOR IT! Everything from Pisco Sours to fine wine as well as truly authentic ceviche and sauces. The Classico Ceviche (seabass with a potato confit and leche de tigre) is sublime, while pure vegetarian dishes such as the Quinoa Multi-coloured and Mint Salad with passion fruit, Mushroom Ceviche and Zucchini Toradito top the popularity charts.

Other notable newbies that opened in 2016

Masala Bar in Bandra should have been on the list, what with its unique cocktails and candle-lit décor. Thalassa at Khar brings you the cool Goa vibe and Greek yummies. District Lounge in the Shalimar Hotel at Kemp’s Corner is a classy and quiet watering hole. Just as with the other Socials, you can rely on the ones that opened this year at BKC, Goregaon and Andheri. The fun MRP in Dadar fuses drinks and drinking games in an entertaining format. Raasta at Khar offers you Jamaican Jerk and space to twerk. The bar scene has also seen a relaunch of Baroke in a very, well, baroque avatar. The Playboy Club at Worli brings you bling and bunnies galore.

ALSO READ -   5 restaurants in Mumbai that are worthy of getting a Michelin star.

For seafood it’s Bastian at Bandra and The Captain’s Table at BKC. For lovers of red meat, it’s The Boston Butt at Kalaghoda. If you’re craving Italian, there’s Rivea at Taj Santacruz and Gustoso at Kemp’s Corner and Khar. High-end Chinese? Head to China INC at Taj Santacruz. For quality casual fare, it’s Three Chicks & a Bear, Jamie’s Pizzeria and Mighty Small in Lower Parel and It Happened in New York in Bandra. For innovative Indian, head to Glocal Junction at Andheri, JAL – An Indian Element in Juhu, Panayaa in Raghuvanshi Mills or Dishkiyaoon in BKC. If it’s a molecular mix you crave, there’s Myxx at Juhu. And although this isn’t exactly in Mumbai, the Boardwalk by Flamboyante, just a speedboat ride away in Mandwa, is a worthy addition to our fantastic food scene too. Pizza by the beach, anyone?

There’s been a lot of expansion of existing brands too. AKA in Worli now has a sibling at Kalaghoda. After Dadar and Lower Parel, Grandmama’s Café is now in Juhu too. The Bar Stock Exchange and Beer Café have sprung up in multiple locations. MeSoHappi is also in BKC. Kaboom and The Woodside have come to Lower Parel. The Sassy Spoon has a little Sassy Teaspoon offspring in Nariman Point and Juhu. The Spare Kitchen from Juhu also has arrived in Worli. Indigo and Neel Indian Kitchen & Bar opened in Powai. Suzette now has a healthier avatar in Kitchen Garden at Bandra. And Khar’s Lighthouse Café now has an outpost in Worli too.

As if all this weren’t enough, there’s a brand new restaurant called Theory slated to open in Kamala Mills in a few days. Run by the Kapurs of Magnanimous Group and their Artisan Food Temple, this one plans to put international flavours on smart plates.

Old favourites v.2
There’s also been a lot of rejigging of the regular reliables into newer, more current versions. Café Basilico in Bandra did it with a new look and new menu in May. The Sassy Spoon in Bandra came up with a new twist to their eclectic European in October, adding small plates and Asian touches. Shamiana at the Taj Palace did a major update in August, while The Korner House in Khar got Chef Vicky Ratnani’s expertise onboard around the same time. Out of the Blue at Khar came out in a very glam avatar with Chef Conrad D’Souza at the helm in November, while Mostly Grills just made a comeback at The Orchid rooftop in Santacruz too. And then there’s the ornate Jade Garden at Worli, which is all set for a big reveal anytime now.

Raise a toast to the charismatic cocktail glass collection by Lucaris

Review: A pamper day at this latest stunner of a salon: Jean Claude Olivier India