In the not so distant past the Indian luxury car market was solely dominated by the big three Germans. In the years to come after officially entering India, Jaguar has not only established itself as a formidable player but is also eating the Germans lunch. Announced last year the Jaguar XF 2.2D which we tested is the British and now Indian automakers contender in the extremely competitive and lucrative entry level luxury saloon market. We spent some time with the beauty and were equally stunned driving it as we were looking at it. 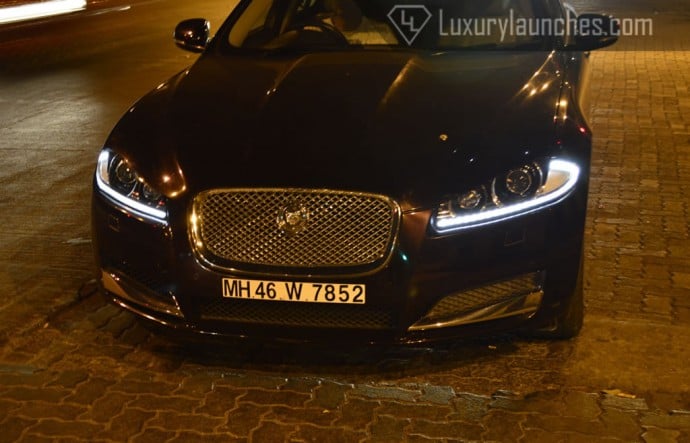 Exteriors –
The XF is an absolute stunner, its sleek and curvy with minimal cutlines and yet has a catlike stance which compliments its brand name perfectly. The man responsible for the curves and lines is the legendary British designer Ian Callum who has also sculpted Jaguar’s uber-sexy F-Type Sports car.

The Jaguar XF is undoubtedly the best looking car in its class.

Leave the running daylights turned on and the big cat stares back at you with a menacing yet calm look. The huge chrome mesh grill, the sweeping roof lines, continuous tail lamps, the car looks sophisticated from just about any angle.

Interiors –
The XF’s cabin delights drivers more than the exterior. The exceedingly stylish interiors are the perfect marriage of generous amounts of wood and the right amount of aluminium. On entry the Start button pulsates red just like a heartbeat, pressing the button not only awakens the Turbo charged diesel but also symphonically slides up the gear selector knob from the center console into the palm of your hand while the air vents rotate 180 degrees from their closed to functional position. The rotating air vents can be turned off and set in their open position as default but the motion happens with so much poise that starting the car will leave a grin on your face.

The dials have been compressed to give a more sporty look, but the compact size does leave a tad bit of emptiness on the instrumentation panel.

Adding to the sophistication are the touch controlled overhead reading lamps and the glovebox compartment which can be opened by touching a point on the wood veneer. 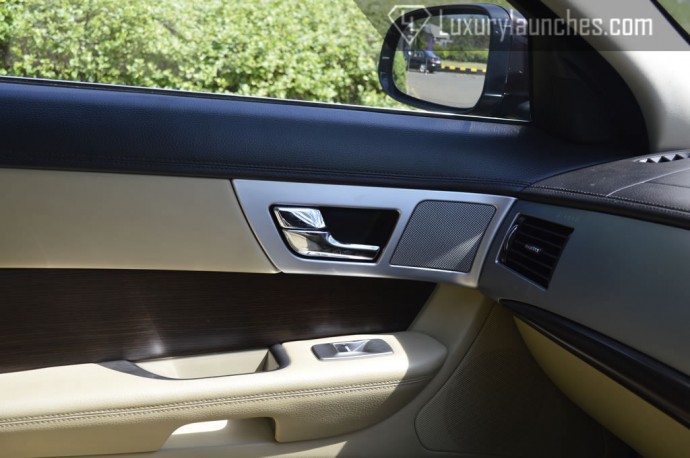 Making way for a majority of the buttons on the center and upper consoles is a crisp touchscreen. Measuring 7 inches across it is not as intuitive or smooth as your Apple’s and Samsung’s, but does get the job done once you get a hook of it. The XF comes with a CD / DVD player, Bluetooth, an internal 10GB hard drive and even a TV tuner which delivers a handful of free to air channels. Powering the audio is Jaguars 250W sound system which makes use of technologies that constantly monitor the cabins acoustics and create filters which balance out the reverberations to deliver crystal clear sound.

If you decide to briefly part with your beloved XF then activating the Valet mode electronically locks the glovebox, trunk and even limits access to audio settings and preset locations in the GPS.

The cabin is refreshingly different from the BMW 5 series, Mercedes E Class and the Audi A6.

The front power seats are supple and well-contoured, and no matter where you’re sitting, you’re surrounded by rich leather and aluminium. Finding the right position or should I say the perfect driving position is an easy task with the multi adjustable seats and the electrically adjusting steering wheel.

Compared to the front the rear is a bit less lavish when it comes to spacing. Leg space is adequate for the two seater rear seats but the rakish roof design does rob away some precious headspace especially for tall passengers.

Coming to the boot it packs a capacity of 500 liters making it adequate for golf sessions, airport transfers and the occasional family road trip. 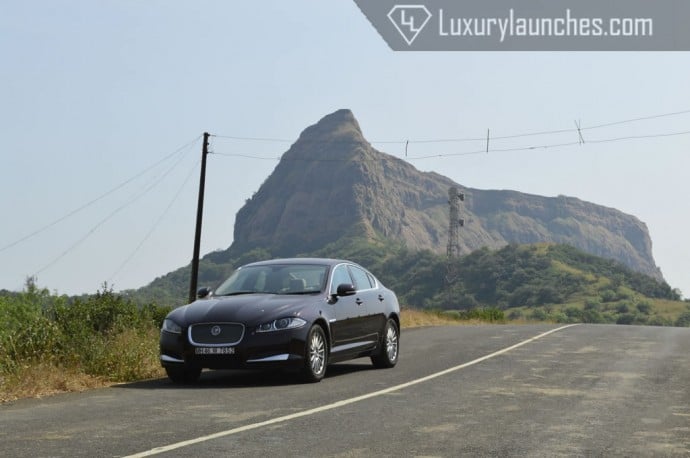 Driving / Handling –
The XF is available with four engine options – 2.0 liter petrol, 2.2 liter diesel, 3.0 liter V6 diesel and a thunderous 5.0 liter supercharged V8 petrol. Under the bonnet of the XF we tested was a 2.2 liter four-cylinder turbocharged Diesel delivering 197bhp of power. In our tests the rear wheel drive raced from a standstill to 100 km/h in 8.9 seconds, though not the fastest it is respectable considering that she is heavy, the XF’s kerbweight is a massive 1.85 tons (1850 kg). Paired with an eight speed automatic it delivers brilliantly quick and smooth ride with shifts that are barely noticeable. For the occasional power drives turn the gear knob into Sports mode, the revs become longer and the paddle shifts hold up the gears till the red line.

Initially the steering does feel a bit light, but on the move it becomes heavier and delivers impressive feedback. The steering is precise enough to make small changes in direction, making the XF an absolute delight on curvy roads.

A refined Diesel and a well insulated cabin make up for a composed ride, always.

Ride quality on the XF is impressive, the 17-inch tyres along with a soft suspension handles most of the bumps and potholes at city cruising speeds.

The car is thirsty, even when compared to the larger BMW 530D which is powered by a 3 liter V6, it delivered almost kms less to the liter at 8.6kmpl and 7.8kmpl on the highway and city respectively. 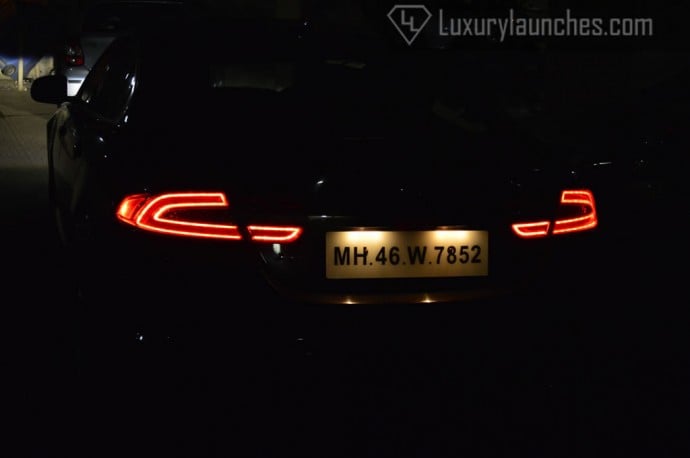 Verdict –
The Jaguar XF delivers satisfaction in all the three dimensions – Its damn good to look at, it makes you feel special inside, and its fun to drive. Its sporty and aggressive exteriors combined with the sophisticated interiors deliver a breath of fresh air in the German dominated arena. Our only qualm is that considering the size of the car the rear seat could have been a bit better packaged especially for taller passengers.