The A4 has for long carried the flag for Audi in the ultra competitive entry-level luxury car market. Introduced in 2007 the outgoing generation moved numbers, and so much so that it contributed close to 30% of the volumes for the carmaker in India. Over the years the car has managed to build a successful following for itself against the likes of the Mercedes C Class and the BMW 3 series. Close to a decade and a face lift later Audi has decided to introduce the next generation of the A4, the 2016 A4 to the Indian market. I was in Bhubaneshwar to drive the Indian spec model as it goes on sale in a couple of weeks from now.

Quintessentially Audi is the first thing that would come to your mind when looking at the car. The new A4 is well proportional, sleek and good looking. To the trained eye the exterior is completely new, the sharpened edges and lowered creases give the new A4 a sporty and aggressive look. According to Audi the aerodynamics have been vastly improved as well giving the car a segment leading drag coefficient of a mere 0.23. 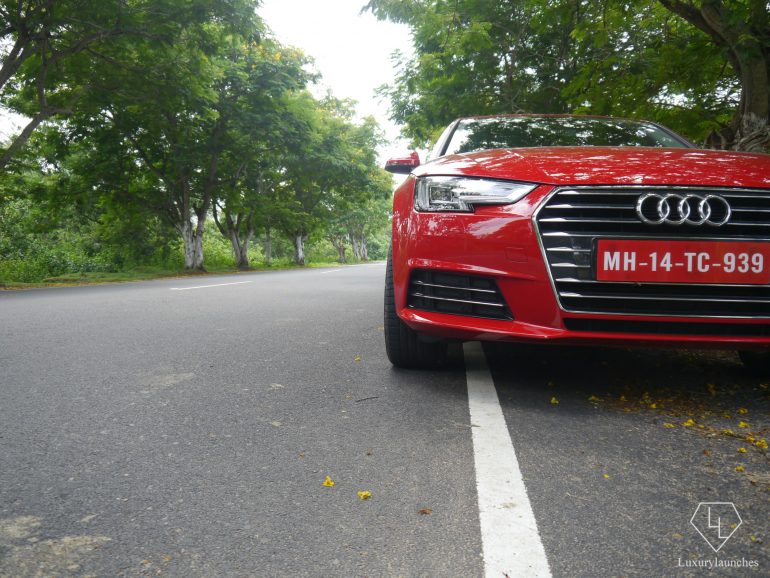 Audi’s signature grill is now more prominent than ever, its wider, bigger and shinier. The headlights are slimmer and now pack an even more aggressive daytime running lights. The LED taillamps further accentuate the sportiness and come with dynamic turn indicators, a rather simple but brilliant trick. 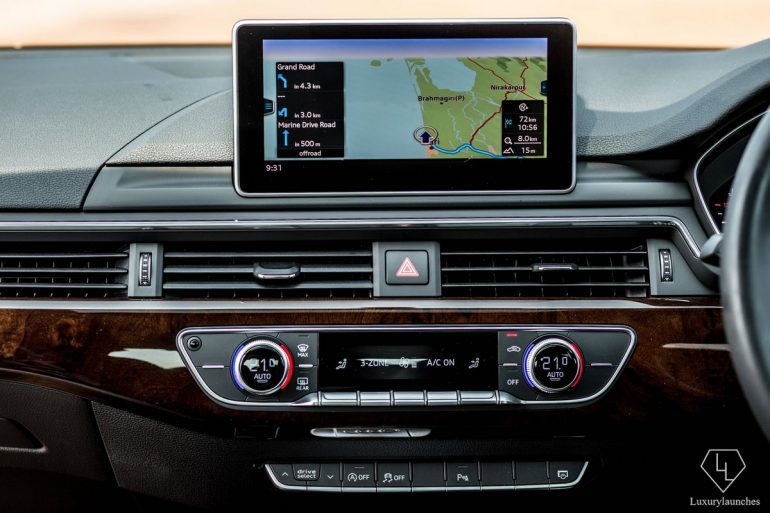 The changes are far more visible on the inside than outside. Let’s start with the tech as there is oodles of it. The 2016 A4 is the latest car to get the virtual cockpit, an ingenious system of a fully digital instrument cluster. A 12.3 inch display behind the steering wheel cleverly and beautifully displays all the essential driving information. There is a classic and infotainment view, in the former the speed and tachometer take over the display and in the latter the dials shrink to give way for navigation, telephone or the entertainment. Sitting at the center is a fixed 8.2 inch display which is paired with the MMI controller. The MMI interface has been hugely improved and is even more intuitive. The rotary controller now supports MMI touch so you can scribble letters and even zoom in and out of maps all while looking at the road. 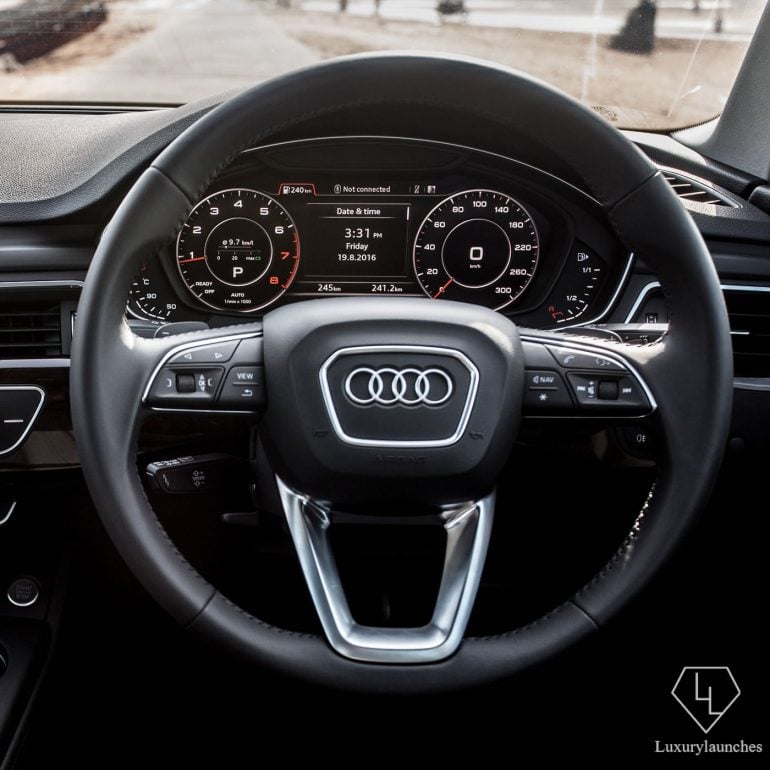 The car now supports Android Auto and Apple Carplay and speaking of mobile phones there is a dedicated mobile box which supports wireless charging and boosts the mobile phones signal by conducting it through the car’s antenna. Audi has also ditched its proprietary connections for the good old USB port and the A4 has two of them. 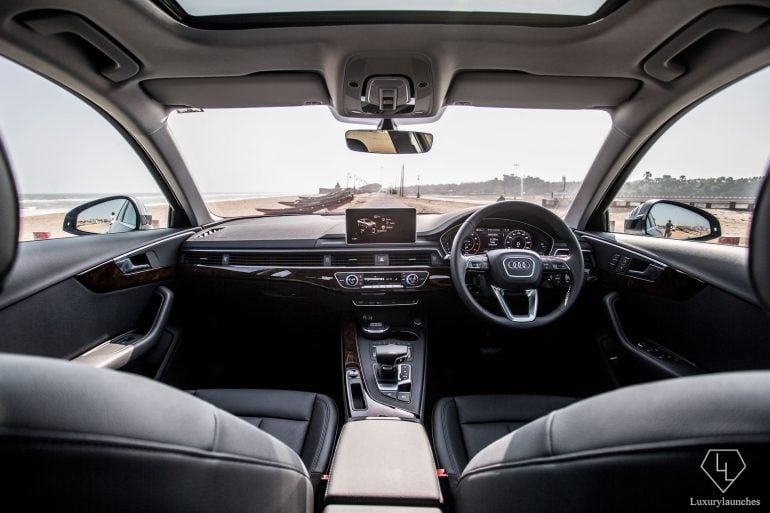 The cabin is minimalistic, luxurious and futuristic The key touch points like the steering wheel and the gorgeous gear lever are all wrapped in leather. Adding to the plushness of the cabin are the wooden inlays in the center console and the dash, something that Audi has done specifically for the Indian market. Audi says the cabin has more shoulder and head room and it was evident in the back seat. Being 6.1’ back seats for me can be a bit crammed but that was not the case with A4, even with a moderately tall adult in the front I was comfortable. 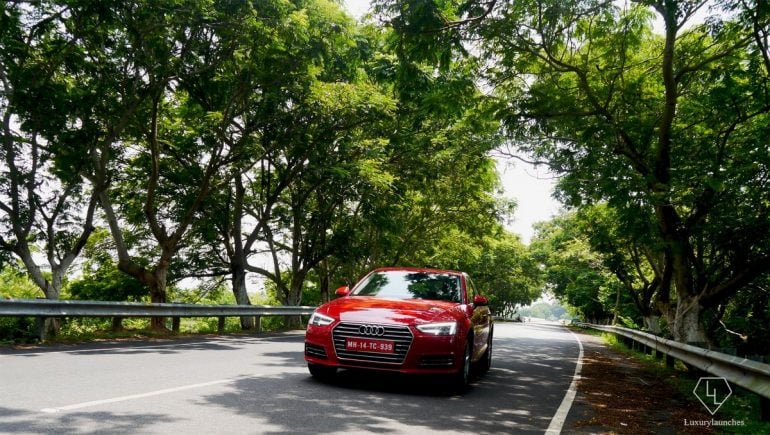 The 2016 A4 is a cool 95kgs lighter than its outgoing generation, the massive weight reduction comes from a chassis made from hybrid aluminium construction and a 1.4 TFSI engine. Yes, you read that right, and it is the only car in the portfolio of all the three Germans and Jaguar’s to sport a sub 1.5 litre engine. Even the A3 comes with a 1.8 TFSI engine. Though 1.4 sounds less, the car does not feel underpowered, the 30 TFSI 1.4 turbo engine spurts out 150 horsepower and 250 nM of torque taking the car to 100 km/hr from a standstill in 8.5 seconds. Driving the car was an absolute pleasure on the empty stretching roads of Orissa. With the peak torque delivery starting at just 1500 rpm the car feels more capable than blistering, at least from a stop. The front wheel drive gets a 7 speed dual clutch automatic transmission or as Audi likes to call it the ‘S-tronic’, which is more like the Barry Allen aka Flash of gearboxes. It’s so fast in shifting cogs that at times when you look at the tacho you know that the gear is shifted. With the paddle shifters I had fun getting around slow movers on the highway. 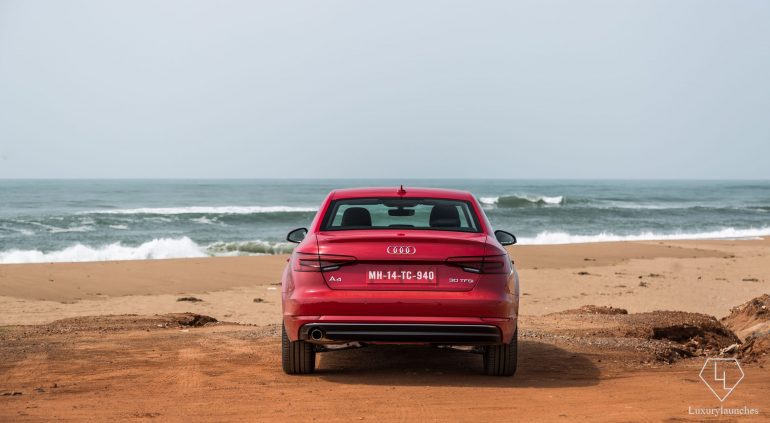 Except for some rough patches, the roads in and around Bhubaneswar are just perfect. Thanks to some construction I got to experience gravel and potholes or to put it simply Mumbai roads. In Comfort mode the bumps were effectively absorbed with only the bigger ones making their way to the cabin. In the front or back, overall the ride was very comfortable. A smaller engine does show its worth when it comes to efficiency, the car delivered 13.5 kms to the liter on the highway. Another factor for the high efficiency is the coasting mode, which declutches the engine when you take your foot off the accelerator pedal, essentially putting the car in neutral and only engaging the clutch when a pedal is pressed.

Audi was tight lipped on the pricing and the options but we were told that the majority of the equipment on the test car was standard. Our car packed in a 10 speaker Audi stereo system, 8 airbags, ABS / EBD, traction control, Hill hold, three zone climate control, front power seats, sunroof and manual rear blinds. Lastly the car comes with two convenience keys which correspond to individual seat, climate and sound settings.

As of now India would be getting the petrol variant (1.4 TFSI) a diesel variant (2.0 TDI) is on the cards.

The 2016 Audi A4 evolves the ever-popular classic styling and adds a host of revolutionary technologies. It’s fun to drive, efficient, good looking and should put up a good fight with the Mercedes C-Class, Jaguar XE and the BMW 3 series.

The 2016 A4 will be officially launched on 8th September.