Tuskers, the pure vegetarian restaurant at the Sofitel Hotel Mumbai, celebrated an authentic Gujarati food festival called “Padharo Gujarat” ( welcome to Gujarat). We had the pleasure of being invited to sample the mouth watering delicacies that were part of their menu during the festival. 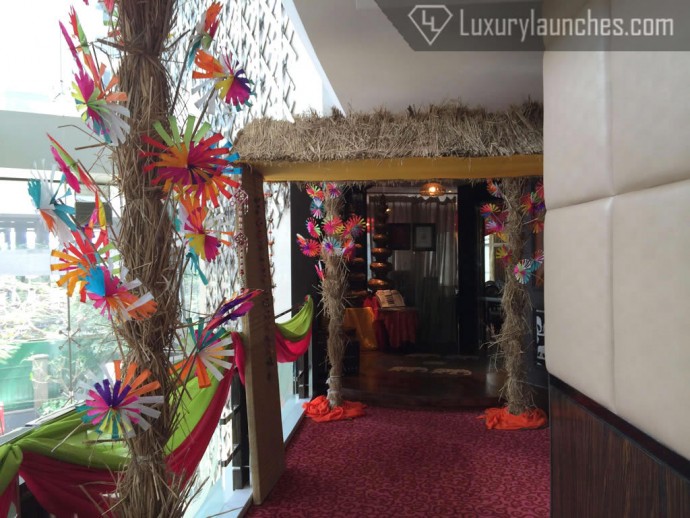 As you step out of the elevator on the first floor of Sofitel where Tuskers is located, you feel as though you have been transported to the vibrant and colourful land of Gujarat. There were colourful stalls put up outside the restaurant which becomes almost like a fair in the evenings. With a puppet show going on in one stall, to henna artists making intricate designs on the hand, to folk dancers and singers singing and dancing on folk lore songs you get swept into the mood of festivities. The entrance to the restaurant had earthen pots stacked one on top of the other to decorate the area. The restaurant itself had beautiful different coloured material draped along the columns and on the ceiling.

We were ushered to our table by the general manager of the hotel and as we settled in he filled us in with the food at Tuskers. He spoke about having a complete transformation of the restaurant once a year for about 3-4 weeks where they have a food festival of a particular area of India. The main chefs for this festival were two housewives specially flown down from Gujarat to head the kitchen at Tuskers. Mrs Urmila Gohil and Mrs Neha Varma prepared mouth watering and traditional delicacies. Their recipes have come down generations from great grandmothers and the spices are specially blended and made at home to get the desired flavours . The menu had been created keeping in mind the ingredients and vegetables available in Mumbai during the month of February.

A home styled restaurant, where the food is more balanced with subtle flavours.

We were served Aam Panna, a raw mango juice with grounded spices and black salt. The black salt is supposed to act as a digestive so it can be sipped after the meal as well. The appetizer platter of papad was served with three chutneys. A green mint chutney, a sweet tamarind and a red chilli garlic. We were then served the thali which looked appetizing and inviting. The farsan (snack) in the thali was samosa and palak dhokla. The small bowls placed all around the thali had a variety of vegetables. There was corn palak, undhiya, fansi vatana (beans and green peas), aloo chaat, moong in gravy, gujarati kadhi, a bowl of curd and a bowl of salad. There was a choice of paratha, fulka ( chappati) and masala puri. We were then served dal khichdi with ghee and pickle.
ALSO READ -   7 of Mumbai’s most anticipated culinary openings this year! 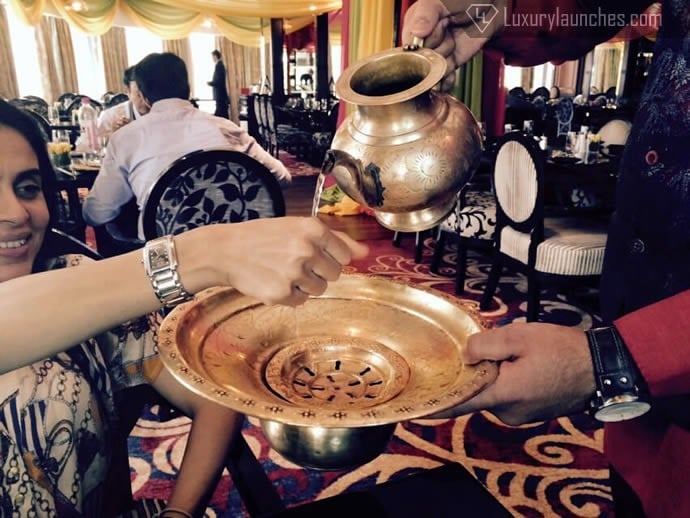 After having stuffed ourselves with the thali, they got us to traditionally wash our hands at our seats and then we were served dessert. Adhyay Pak is made of 36 different herbs, and is believed to help in strengthening the bones, it is believed that it releases heat in the body and hence it is served only in the winter months. The other dessert was Citaphal basundi (custard-apple flavoured sweetened milk ). It is made of mildly reduced condensed milk and not as thick as it is normally made.

The meal, the ambience, the flavours transported us to Gujarat, the land of traditions and culture and hospitality.

Lunch at the restaurant was a thali and dinner was ala carte where the food is prepared after the order is placed. The cost of the thali was INR 1,250 plus taxes.
ALSO READ -   Review : A culinary delight with diverse cuisines at Fenix Oberoi

We left Tuskers, happy and satiated after the delectable Gujarati meal.