We’ve had a lot of new information come to light about Abdulla Al Humaidi’s ‘London Resort’ over the last few months, and the latest hint dropped by the resort’s bosses are bound to excite fans of American fantasy drama series Game of Thrones.

In a Tweet made on New Year’s Eve on the London Resort’s official Twitter page, it was hinted that a dragon-themed Game of Thrones-style attraction is being planned. The London Resort posted:

Attached to the Tweet is a piece of concept art that shows a large castle beneath a murky sky with a fire-breathing dragon sitting atop it. In the background, several rollercoasters can be seen. “Hic sunt dracones” is also Latin for “Here be dragons”, used historically on medieval maps to warn of uncharted areas where potential dangers were thought to exist. 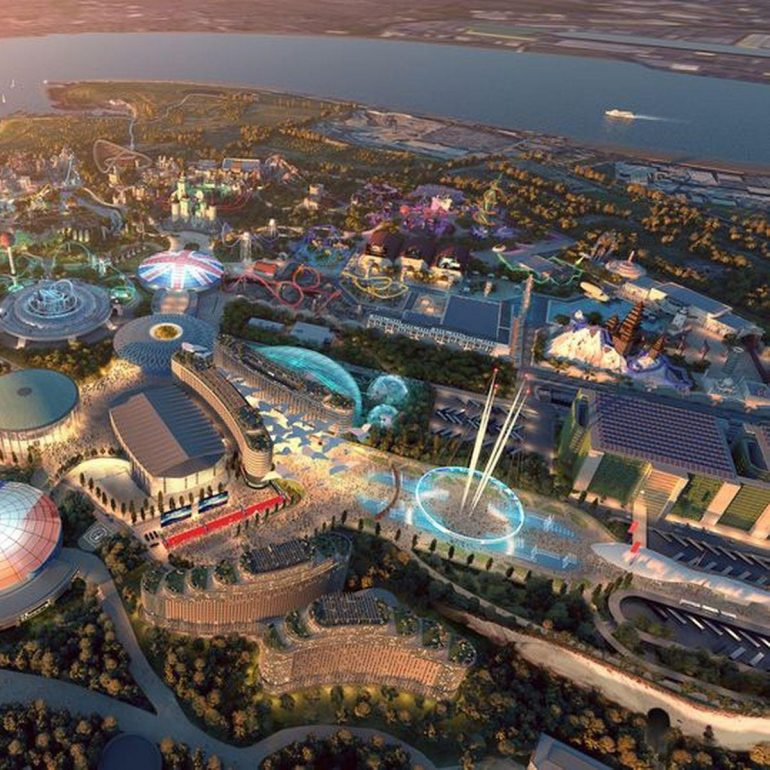 What is The London Resort?
The London Resort is a proposed theme park and resort in Swanscombe, Kent. The project was first announced all the way back in 2012 and after almost a decade of careful planning, work is soon set to begin on bringing Abdulla Al Humaidi’s ambitious vision to life.

The London Resort is expected to be one of the UK’s largest single-site employers and will cost more than US$3.6 billion to build. The resort will also contribute significantly to the UK economy. According to independent research, it will generate:

Abdulla Al Humaidi’s resort will be built on a 535-acre site on Kent’s Swanscombe peninsula, which is around 17 minutes away from . . Central London via train. 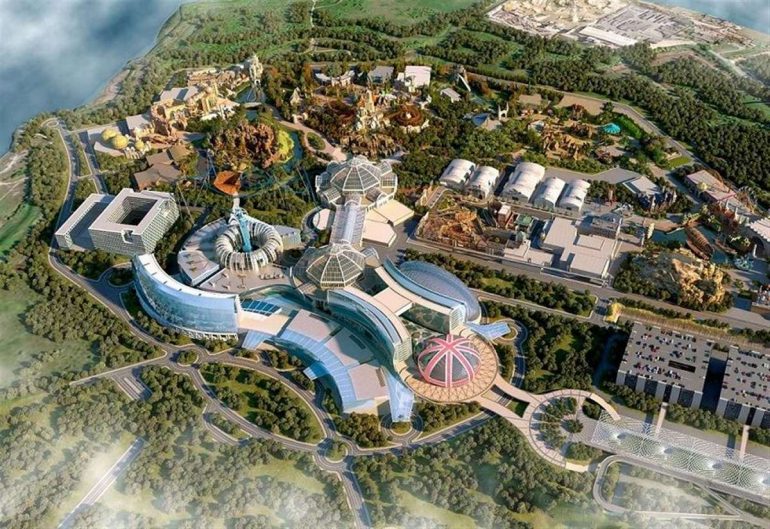 What Will Be at Abdulla Al Humaidi’s London Resort?
The resort will reportedly operate on a similar scale to resorts built by Disney and Universal Studios. When the project is finished, 4.65km2, or 465 hectares, of resort space will be accessible to guests, making it twice as large as Thorpe Park Resort, one of the UK’s leading entertainment parks.

There will be hundreds of rides and attractions spread out over several themed lands, a huge shopping plaza, live entertainment, an eSports facility, a business and events facility, and more. Abdulla Al Humaidi plans to partner with some of the world’s biggest entertainment companies including Paramount Pictures and the British Broadcasting Corporation.

The original themed lands planned for the London Resort include:

. Starport
. The Jungle
. The Isles
. The Kingdom
. The Woods
. The Studio
. High Street

These lands will incorporate elements spanning the likes of history, science fiction, fantasy, and the modern-day. Each of the six lands will have its own rides and attractions that will cater to its unique narratives, which essentially means the London Resort is several parks in one.

In April 2021, the resort’s bosses announced a new dinosaur-themed “Base Camp”. This is the themed land that we currently know the most about, and it will reportedly include:

On top of all this, more than 3,500 hotel rooms will be created along with two ferry terminals on either side of the River Thames, back-of-house facilities, a visitor center, and a new road from the A2.

Crucially, Abdulla Al Humaidi’s London Resort hopes to be one of the most sustainable entertainment parks in the world.

“We are creating a first-class theme park. A destination that maximizes all the new, immersive, and interactive technologies and experiences in the world,” PY Gerbeau, chief executive of London Resort Company Holdings (LRCH) said in a press statement. “But we won’t just be creating a world-class leisure destination, it will also be one of the most sustainable theme parks on the planet,” he added.

When Will Abdulla Al Humaidi’s London Resort Open?
In the Tweet, park bosses hinted that the London Resort’s opening will now take place in 2025. This is a one-year delay on the resort’s initial planned opening date of 2024.

While Abdulla Al Humaidi’s resort has faced several delays and setbacks, not least due to a huge level of bureaucracy, things do now seem to be moving in the right direction.

London Resort Holdings Company (LRHC) recently announced the first businesses chosen to partner with LRHC and KEH Group on the project on its website. It has also been announced that 65 other businesses, many of which are from the United Kingdom, have been shortlisted as potential candidates who may be called upon in the future.

According to LRHC, around 2,000 businesses from across the UK and Europe registered their interest in less than a month to partner with and help deliver the world-class resort. This, according to resort bosses, shows a clear appetite within the business community to bring the project to life despite initial skepticism from UK media and setbacks for the project.

ALSO READ -   5 must have features for a luxury ski chalet

Figures released by Abdulla Al Humaidi’s resort team say that almost 90% of these registrations came from small-and-medium-sized enterprises, with 30% of them coming from across Kent and Essex.

Around one-third of registrations came from construction firms with the remaining two-thirds coming from retail, food and drink, creative, security, engineering, logistics, and entertainment businesses.

“We are delighted with the response. It’s incredibly inspiring to see the range of businesses that share our vision to create one of the most exciting, sustainable entertainment destinations in the world,” said Andy Martin, Strategy and Communications Director for the London Resort, in a statement last year.

While the London Resort has faced many hurdles and setbacks during the last 10 years, more recently due to the COVID-19 pandemic and the recent designation of the Swanscombe Peninsula as a ‘Site of Special Scientific Interest’ (SSSI) by Natural England, development is still going ahead.

When talking about Natural England’s designation of the site as an SSSI, Gerbeau said that “subtle changes” would be made to the project’s green infrastructure strategy to account for this which will have a minimal impact on the resort’s development.

In a letter to Natural England, Gerbeau said that designating the site as an SSSI was an “erroneous” decision but nevertheless that the London Resort team will work closely with them “to agree how we avoid or mitigate impacts upon the features of the SSSI, and other features of biodiversity interest present…”. 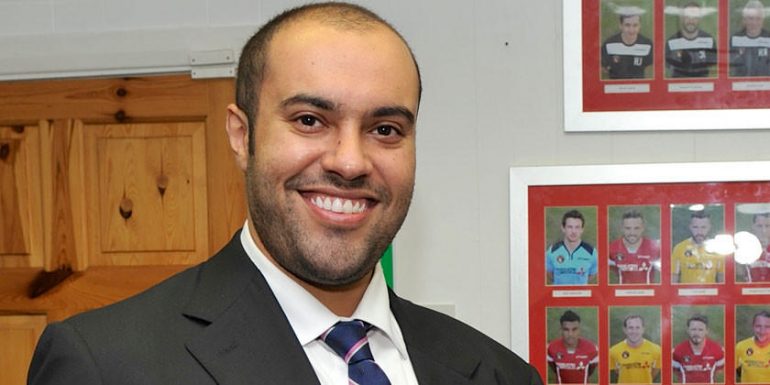 Who is Abdulla Al Humaidi?
Abdulla Al Humaidi is a highly respected businessman and entrepreneur who manages one of the oldest and most respected merchant houses in Kuwait. Since the 1940s, the Al Humaidi Family has built one of the country’s most successful business profiles, and they are working extensively to expand this overseas.

The main way Abdulla Al Humaidi plans to expand the family business overseas is through his international holding company, Kuwaiti European Holdings (KEH) Group. This is a holding company for Abdulla Al Humaidi and the family’s international assets that was founded in 2008. It focuses on several key sectors including real estate, leisure, and financial services. KEH Group has locations in Hong Kong, Dublin, Dubai, Cairo, London, and Kuwait.

While Abdulla Al Humaidi and KEH Group is known for its successful business ventures, one of its most famous projects is the London Resort. With development now ramping up as park bosses call for more businesses to come forward to help develop the resort, we might just be a few short years away from seeing Abdulla Al Humaidi’s ambitious vision come to life.