The RS is Audi’s befitting reply to the BMW M and the popular Mercedes AMG class of performance vehicles. In this day and age of turbo and superchargers the Audi RS5 is a refreshingly unique vehicle, it is one of those rare cars which packs in a naturally aspirated engine. In this case its a monstrous 4.2 liter direct injection V8 petrol engine which cranks out 450 hp. On a lazy Saturday morning we decided to put its massive engine and its handling prowess to the test on the Mumbai-Ahmadabad highway. 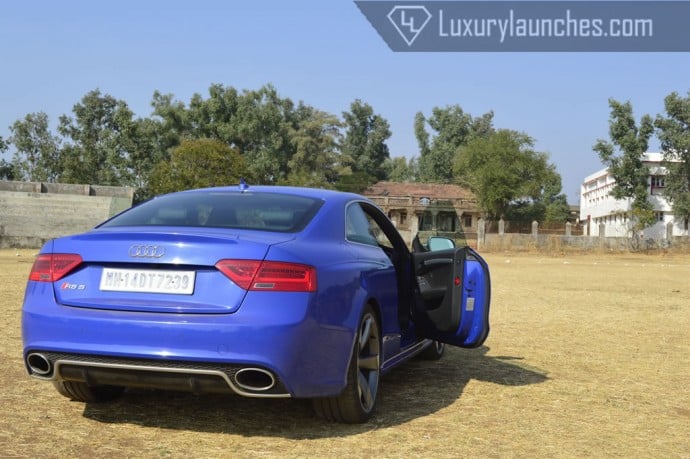 Exteriors –
Our head turning test car was clad in an electric blue bodypaint or as Audi calls it Sepang blue with pearl effect. From the front the car has the traditional Audi honeycomb grille and on each side are the large air-intakes which feed the ever hungry V8. The front profile is further punctuated by Audi’s signature daytime running LED lights.

The Audi RS5 has to be the most beautiful german coupe in the market today.

On the grille is the RS5 badging which subtly hints of the monster under the hood, the Germans sure do know how to underplay. 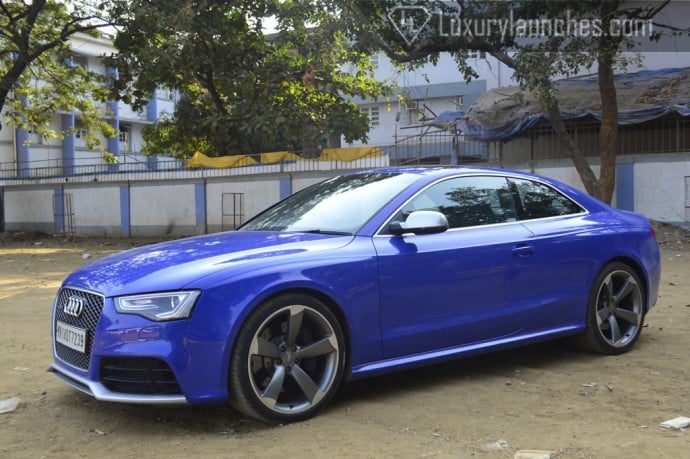 Without the sound of the engine growling its the side profile that makes most heads turn. And why not? The frameless doors combined with sophisticated and angular lines and the massive 19 inch RS specific wheels will not only give you second glances but continuous stares as well. The rear is dominated by the massive oval exhausts along with a spoiler which automatically popups up at 120 km/h and can be summoned from the cabin as well. 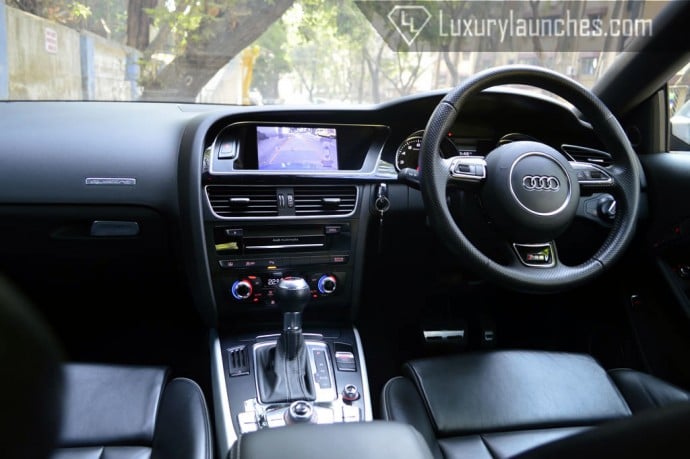 Interiors –
If you thought the exteriors were appealing wait till you take a look of the cabin. There are a pair of RS5 branded leather seats clad in high quality black leather. Offering extended thigh support the electronically adjusted seats don’t hug you tightly but are extremely comfortable nonetheless. The entire cabin is draped in black, and feels extremely plush with the aluminium and carbon fiber accents. The center console is the same that you would find in all the Audi’s, being an RS series some changes, perhaps in the air vents and the ambient lighting would have been refreshing. The cabin is driver focused, the controls and the instrument panel is canted a bit towards the driver. 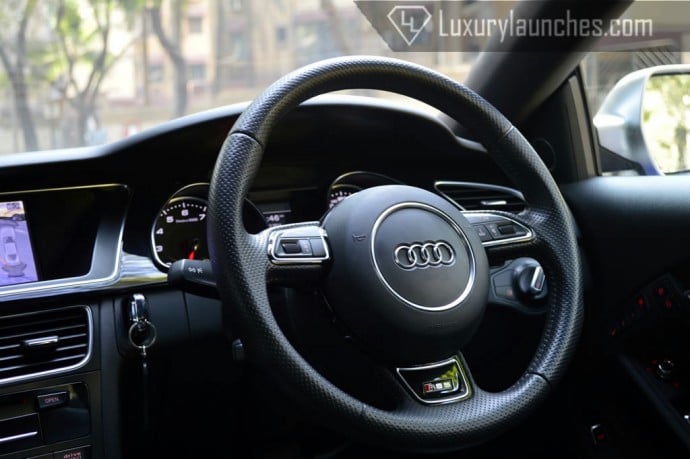 The steering is a delight to hold and offers excellent grip. Packing large paddle shifters and RS5 badging the steering would have been perfect if it was not for the manual adjustment.

The cabin tech offerings include 20GB music storage, Bluetooth audio and phone integration, GPS, iPod / USB connectivity, SD card reader and a 6 CD changer. Putting you in command of the system is Audi’s MMI interface. The clickable knob can be rotated in eight direction to move through the interface. Audio is provided by a state of the art Bang and Olufsen sound system which is specially designed by the noted Danish manufacturer for Audi. 505 watts of pristine audio is delivered through 14 speakers embedded in the cabin. You can be assured that the audio quality will be top notch when driving as a microphoned installed in the ceiling measures ambient noises and adapts the volume and timbral balance accordingly in real time.

The rear seats are a bit tricky to get in and have extremely limited leg and knee room. But like all 2+2’s its a strict two seater and the back seat is best left for keeping a briefcase or a handbag. 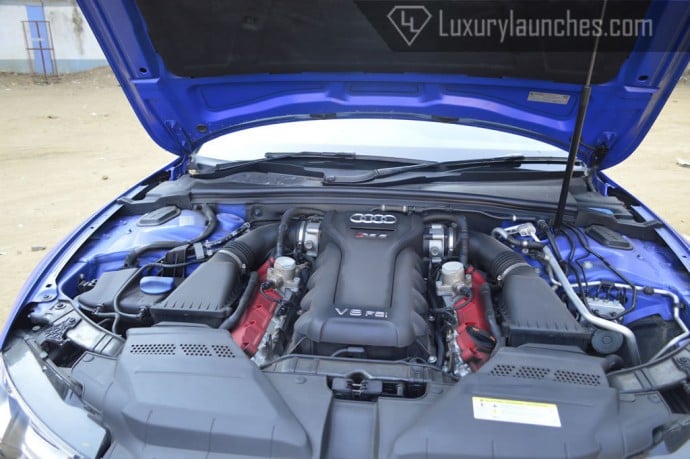 Driving and Handling –
So how is it to get behind the wheel of this firecracker? To put it simply – there are cars which are outstanding and then there are those which set the bar for outstanding cars, the Audi RS5 is the latter. Under the shiny hood is a naturally aspirated 4.2 cylinder petrol which cranks out 450 HP and 317Nm of torque. The engine is mated with Quatrro all wheel drive and a fluidic seven speed dual clutch automatic transmission which is also the quickest S tronic gearbox Audi has ever produced.

DSG gives you exactly what you need and perfectly tames the 4.2 liter engine.

The car starts with an uneven and pleasing gnarl and immediately mellows down to a smooth humming sound. We decided to put this beast to test on the ever inviting tar laden roads of the Mumbai – Ahmedabad highway. Steeping on the accelerator I was welcomed not with a sudden gush but with pure yet powerful linear acceleration. Although gears are short shifted for higher fuel efficiency in a little under 18 seconds the speedometer had climbed at an even geometric rate to 160 km/hour, all this while the car was still in drive mode and I had not given it full throttle yet. For a performance coupe the car is very easy to drive in urban traffic and feels like a luxury cruiser but with a lot of power on the tap.

Push the gear down and the sport mode is activated, in an instant you will hear an even bark of the engine which commands you to take control of the car.

In an instant it radically transforms from a luxury cruiser to a galloping beast.

We were left in awe of the responsiveness offered by the 7-speed DSG, the revs were held longer and the gears were held on to the red line on full throttle. The RS5 makes up for the low torque of 317 nM with an astonishingly high red line of 8250 RPM.

Press the pedal and the german symphony comes alive.

In our tests using the launch control the car rocketed from a standstill to 100 km/hr in 4.75 seconds. The top speed is electronically limited to 250 km/hour. Like the acceleration the downshifts are equally pleasing as they are met with a satisfying bark from the exhaust.

The 7-speed DSG whisks through the gears crisply, it is extremely intuitive and feels that it is hard wired to the driver, it exactly knows when to downshift, hold on to a rev, and when to slide up. But then on the vast highway you need full control and the manual mode delivers just that.. The transmission becomes more predictable, gears hold on to the redline till you paddle them up, but the icing on the cake is that the heavenly barks that the engine spurts on down and upshifts are now under your command.

The performance of the car can be customized using Audi’s drive select system. The car offers four modes – Comfort, Auto, Dynamic and Individual which allow you to change the characteristics of the steering, suspension, engine, transmission, exhaust tone and the sports differential.

The Comfort mode is suited for city driving and cruising, the steering is light, throttle responses a bit subdued and relaxed, the electromagnetically controlled dampers absorbs the minute bumps, the transmission upshifts earlier and the exhaust note is muted.

Shift to Dynamic mode and the cars throttle response and steering stiffen up. The gears are held longer and the exhaust thunders. The suspension becomes extremely stiff and the minutest of the bump is amplified in the cabin, sadly none of the Indian roads are fit for it.

Auto mode chooses the best mode as per your driving and Individual as the name suggests lets you mix and match the individual characteristics. For eg – we used the Sport differential and transmission and Comfort suspension.

It is not just brute force but there are some interesting technologies at play which make the ride even more exciting. First off there is the sport tuned Quattro all wheel drive, its center differential sends 60% of the power to the rear wheels by default this is further adjusted between 70:30 and 15:85 front to rear as the control systems deem fit.

Quattro has a reputation for grip and along with the massive tyres, traction control and the stability program the RS5 delivers a ton of it.

Then there is the torque vectoring differential, this ingenious system adds more torque to the rear outward wheel when making sharp turns, this helps overcome the slight understeer of the car. Just press on the accelerator and the wheel rotates more delivering incredible stability when making turns at high speeds. It does take some time getting used to it but once you do its a whole lot of fun on the bends.

Weighing in at 1,850 kgs the Audi RS5 is a heavy car. The four disc brakes pack enough stopping power and bite to bring this racer to a halt quickly and safely.


Verdict –
Spend some time behind the wheel of the Audi RS5 and you will run out of reasons to not fall in love with it. The car has a high revving silky smooth naturally aspirated V8 engine that sounds amazing, a fluidic gearbox, stunning exterior design and a sporty tech packed cabin. This along with the tuned Quattro all wheel drive and sport differential technology make the Audi RS5 the complete package.

The RS5 has an enormously broad spread of power, a lightning fast throttle response and a thrilling soundtrack. Simply put it is one of the most intuitive and exciting cars I have driven. If you are in the market for a performance coupe, don’t even think of a moment to arrange for a test drive. Just find your nearest Audi dealer… and do it.

Note – Being a performance car we have replaced the Value for money metric with performance for obvious reasons.