Benelli is a motorcycle manufacturer that has seen it all – hard times of two World wars, change of ownership, a commendable history of motorcycle and above all bankruptcy. Yet the company is still here and kicking and is now owned by a Chinese automobile manufacturer. It has recently entered into Indian shores by collaborating with the DSK group. Having said that, Benelli is one of the oldest Italian bike manufacturer who started making motorcycles way back in 1911. It all started from the Pesaro town of Italy, when Mrs. Teresa Benelli started repairing bicycles & motorcycles; later upgrading themselves to build their own 98cc 2 stroke motorcycles. 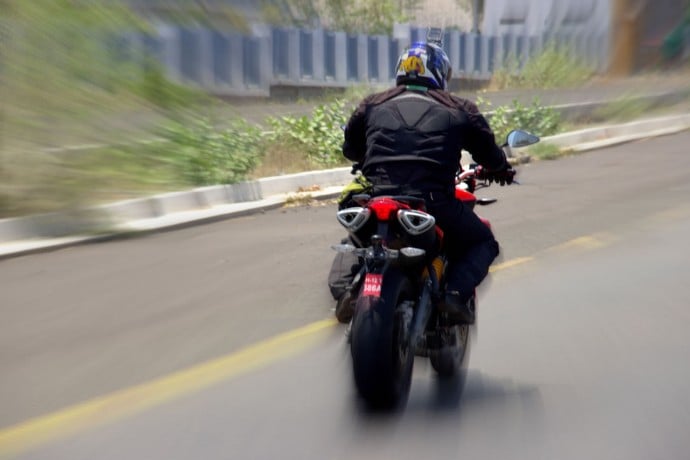 Coming back to the motorcycle that we are going to talk about, the Benelli TNT 600i. It belongs to a segment which still lacks competent players except for the Kawasaki ER-6n it is still open to manufacturers to explore this space. The TNT 600i is a very conventional looking naked bike & has got the looks to impress you at the first glance. Thanks to its overall beefy looks, V shaped headlights, well shaped 15 litre fuel tank with nicely carved edges & a little old school but very well insulated under seat 4×2 under seat exhaust pipes it again proves how peculiar Italians are when it comes to detailing. Good stout looking tyres along with a colossal swingarm adds to its muscularity. Frankly, the final fit & finish doesn’t disappoint at all. 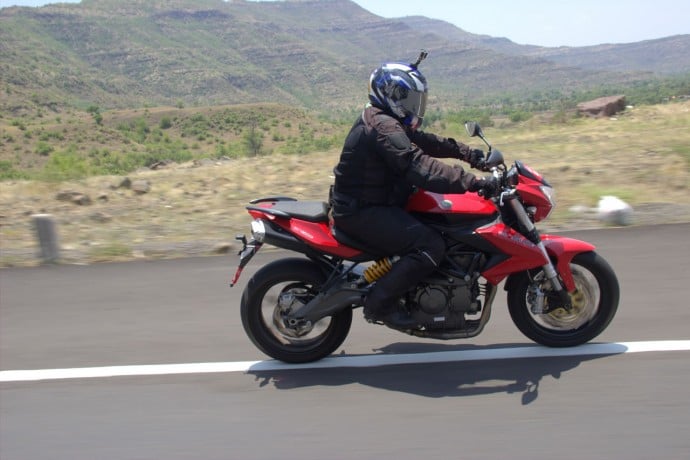 With a bare it all attitude (read as Naked Bike) the 600i likes to flaunt its big engine, the in-line-four motor makes it presence felt when it comes to life. The four cylinder, four stroke engine in the 600i is the first of its kind in the country. Once that urge of riding hard is there in the rider’s heart the 80.5 bhp making engine gives it all to make a perfect orchestra thorough it’s under seat exhaust except the fact that little vibration starts creeping up post 5500rpm on the handle bars & fuel tank. The six speed transmission is backed by a cable clutch, gear shifting is quite positive though we had some niggles with the clutch lever during the test. The 600i comes with a wonderful mid range which is followed up to the firm top end & thanks to the aggressive riding position; the bike is a treat even on 150+ kmph once past 6500 rpm. 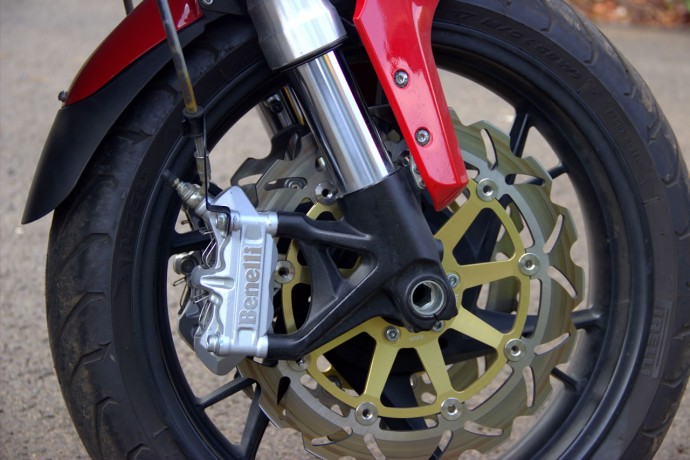 The Pirellis do their jobs really well without any complaints with good braking support from the front twin 320 mm discs & the single unit at the rear. The absence of the ABS is definitely felt & we expect the folks at Benelli to react to this very soon. Overall it packs a combination of speed, engineering & design which can put the Kawasaki ER-6n in a spot in the long run, although the Kawasaki too lacks ABS. We are yet to get our hands on the Japanese so not cent percent sure about its performance till now. With a price tag of 5.15 lacs, according to us the Benelli 600i is a good buy before upgrading into the litre class.