Blancpain’s Metiers d’Art studio in the Vallee de Joux, dedicated to the creation of the most exceptional works of art and one of a kind timepieces, introduces a new model of the Villeret Collection bearing the image of Ganesh. Ganesh, one of the most revered and important gods in the Hindu pantheon, a divinity that is believed to be the remover of obstacles, and is represented with the head of an elephant.

The image was rendered using the arts of fine engraving, damascening and shakudo. This image of Ganesh on the watch is the same one that won the Artistic Crafts prize in 2015 Grand Prix d’ Horlogerie de Geveve. 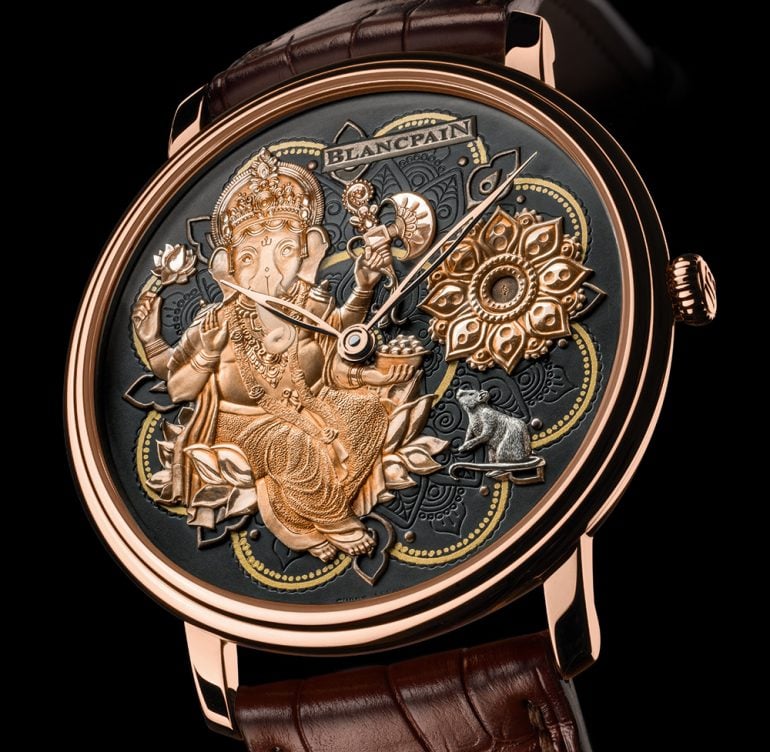 Both of these unique pieces have a shakudo dial, which is a special alloy of gold and copper. Shakudo originates from Japan where it was historically used to decorate katana fittings and other ornaments. It visually resembles bronze but when it goes through a distinctive patination and heating process, it gets an indigo black patina, which represents lacquer.

The dial depicts Ganesh with four arms, holding various objects in his hands, the left side of the body symbolizes emotions while the right side symbolizes reason. The axe in the in the upper left hand and a lotus in the upper right hand signifies that the only way to reach spiritual perfection is to cut secular attachments and overcome emotions. The laddoos symbolize wealth and good fortune and the lower right hand is shown in a blessing pose with the mouse near the feet of the deity. The mouse designates that the ego is conquered and no longer affected by the worldly temptations. 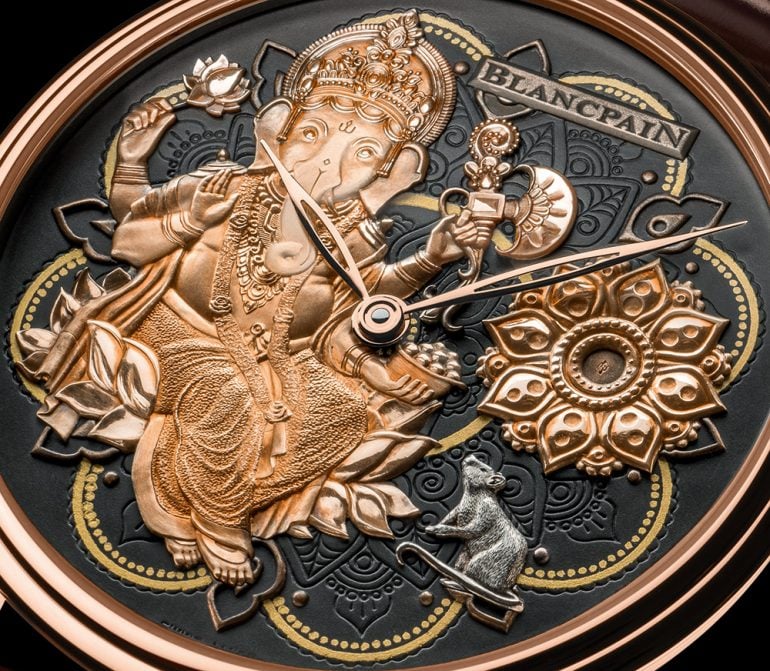 The designs on the dial are hand carved following which gold is hammered into the resultant troughs. The new model is crafted from red gold and it measures 45mm in diameter. The see through case back showcases the hand wound movement adorned with the finest finishing, hand applied Cotes de Geneve beveling, and circular graining. The watch comes on a brown alligator strap with a price of 111,500 pounds or approx. $ 135,851
This one of a kind Blancpain Metiers d’Art Villeret Ganesh was introduced in September 2016, coinciding with the Ganesh Festival in India.