BMW was the first to conceptualize the idea of an SAV (Sports activity vehicle) said Mr. Philipp Von Sahr, President of BMW, India. The idea behind a SAV is to fuse the power and space of a SUV with the sleek curves and lines of a Coupe. The result is BMW’s X line of vehicles which include the X1, X3, X5 and at the top of the range is the X6 which was relaunched in India earlier this week. The X6 is not a stranger to India, the first gen made its debut in the country in 2009 and then pulled off from the market last year. If I were to pinpoint a reason for poor sales it would be the shape – as unconventional it is the shape strikes a chord on the extreme side thereby evoking a strong love / hate relationship with the car and completely overlooking its superior driving dynamics. But placing its money on the changing perception of an SUV’s image and future launches by competition (the Mercedes GLE) BMW launched the second generation X6 in the country at Navneet motors in Bangalore.


The new X6 is a bit lengthier, lighter and more sleeker and sportier with the large headlamps and prominent grille, The 2015 model will be offered in only one trim in India the xDrive40d. The xDrive all wheel drive will be powered by a 3.0 liter inline V6 Diesel that delivers 333 HP and a maximum torque of 600 Nm at 1,500 – 2500 rpm which takes the car from a standstill to 100 km/hr in 5.8 seconds. The engine is mated with a 8 speed automatic gearbox with triptronic should you want to take things completely in your hands. The M sports kit adds a convenient and functional M leather steering, along with badging on the door sills and gives a M styled car key as well.
ALSO READ -   Who needs Starbucks when you have the Philips Saeco Intelia Espresso Machine 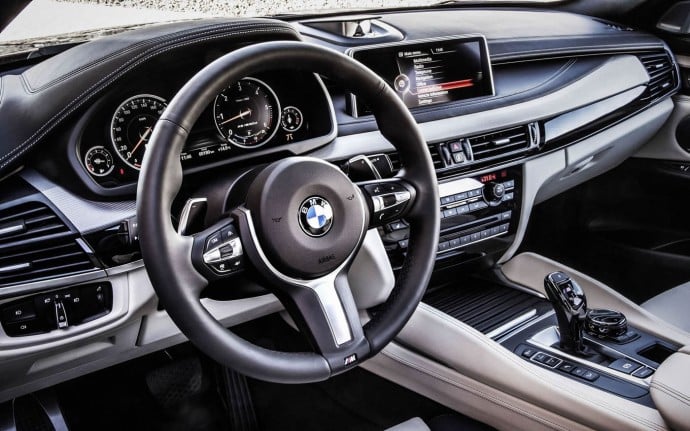 From the inside its the same as its predecessor in terms of the layout although a bit more comfortable and luxurious. Coming to tech it packs in the latest iDrive interface, Harman Kardon multimedia system, heads up display, night vision and more. Other features include adaptive suspension, Eco torque vectoring rear differential so you can take on the curves with ease, DSC, Dynamic traction control, Start-Stop system along with a slew of safety features.

As of now the car will come through the CBU route which pegs the cost of the vehicle at Rs 1.15 crore.