Michelin starred Chef Vikas Khanna Is all set to take you through a luxury culinary experience with his new gold crusted cookbook called ‘Utsav’. Launched at the Cannes film festival 2015, Utsav is the world’s largest collection of festivals, ceremonies, sacred ingredients. 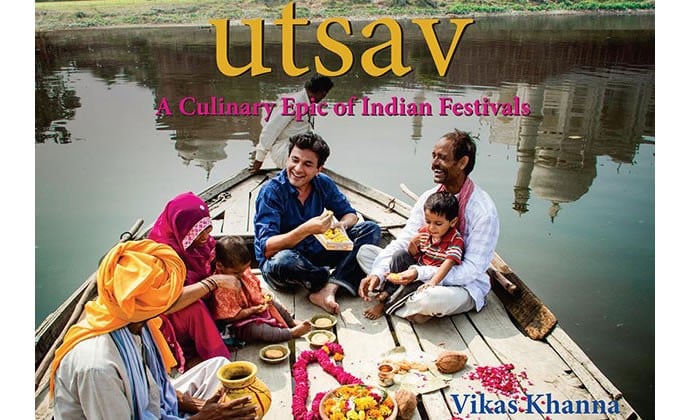 Chef Vikas Khanna has taken 12 years to compile Utsav as he researched and captured festivals that have got missed or have been left to just community sharing today. Weighing almost 15 kilos in a beautifully box with gold foiling, Utsav is an eclectic combination of celebrations, ceremonies, traditions and culture. The celebrated Chef has travelled extensively across the country over the last few years – from capturing a Chapchar Kut in Mizoram, a Hornbill in Nagaland to Shigmoutsav in Goa to Losar in Ladakh to Pongal or Onam in South India. Utsav captures more than a hundred festivals, ceremonies and sacred ingredients that have been used scientifically as well as mythically in our rich heritage.

ALSO READ -   Review: Basking in the Indian Detox' Dinner pop up at The Pantry

Utsav represents Khanna’s 12-year cooking journey of more than 300 recipes compiled from Indian festivals and captured in a 1200-page. The price of the limited edition print will be Rs.8 lakh. At the Sothebys auction, it may go upto Rs.50 lakh.