The Sabyasachi couture show in New Delhi was complemented by a striking collection of men’s and women’s shoes and bags created in collaboration with French designer Christian Louboutin. The designer’s second collection was another beautiful blend of Parisian and Indian style and craftsmanship. Louboutin’s first show had been for Sabyasachi’s “Bater” show last July.

The breathtaking collection of shoes and bags was crafted using unique materials like cork, leather and raffia with adornments and embellishments ranging from intricate embroidery to hardware in the form of beads and his signature spikes in varying sizes. 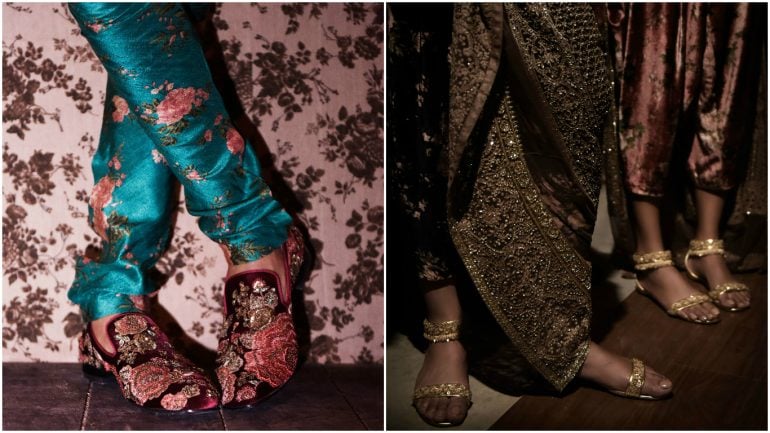 Women’s shoes
The ‘Louloudance’ a popular platform style with an ankle strap was created in regal colours with a contrasting gold lame piping. Combination of Sweet Charity bows, embroidery or spikes adorned the 140mm heel. The ‘Gyposandal’ in custom metallic finishes of gold, platinum and silver were eye catching.

Classic styles ‘Prive’ appeared in opulent black velvet with burgundy accents, while the gold and black version featured hallmark Sabyasachi embroidery, clearly stamping the union of the two designers. ‘Brodiza’ appeared in special editions for the couture show in satin and leather variations. ‘Tuctopen’ and specially made open toe booty ‘ Tuctoboot’ marked their presence with baroque embroidery in black, gold and bright pink evoking a vintage look. ‘Fifi’ in a 140mm heel and a potpourri of pearls and spikes on a mini glitter base. ‘Girlsbestfriend’ has hand placed baguette crystals specially created in three versions, flats, 100mm heels and platforms, with the platforms adorned in embroidery, mini spikes and fringed silver chains.

Men’s shoes
From rich velvets with intricate embroidery motifs to mustard with accents of spikes the men’s collection offered styles for many occasions. ‘Dynodent’ stood tall with Jurassic spikes, while ‘Tassilo’ moved in beat with the live band. 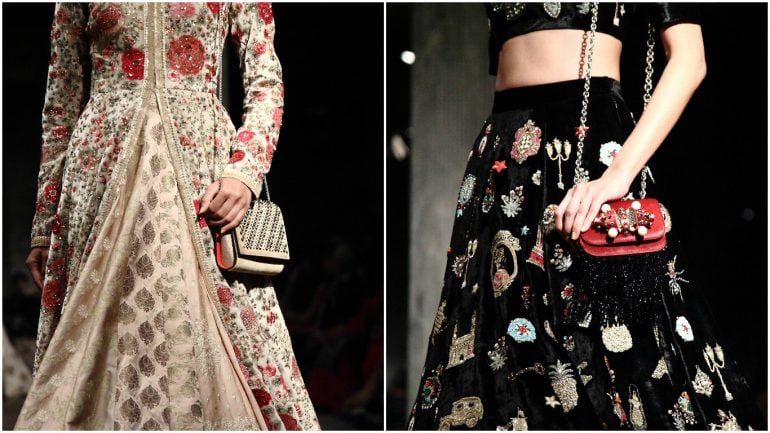 Bags
The collection of bags featured iconic styles such as the ‘Eloise’ and ‘Tribloubi’ in decadent materials of nappa leather, suede and pony with popcorn spikes and accented with floral embroidery from the house of Sabyasachi. The ‘Paloma Clutch’ in suede pony artfully embroidered in a floral bird design with embellishments and hardware complemented the couture pieces . ‘Sweety Charity’ referencing the Fall/Winter 2016 Tudor theme was constructed in new materials with long fringes to add a play of movement.