In India, Louis Vuitton is the name that first comes to mind when talking about sought-after luxury brands. There is no better status symbol than an LV bag to show the world you have arrived. Similarly, when it comes to the Indian film industry, you know you’ve arrived if you co-star with superstar Deepika Padukone. Her latest achievement is not a blockbuster movie (though there are several in her kitty), but the acclaimed Indian actress, producer, and philanthropist is the proud new House Ambassador for Louis Vuitton. In the latest leather goods campaign for the Dauphine bag, we see not one but three House Ambassadors strutting their stuff with the dashing Dauphine bag in tow. 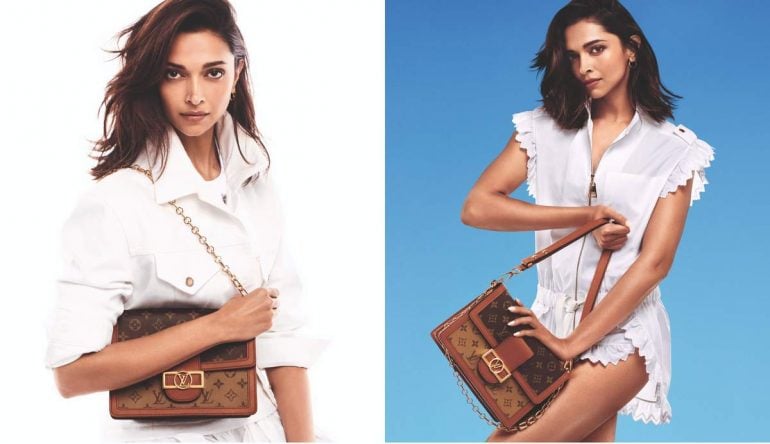 Keeping our Indian superstar company is Oscar-winner and long-standing House Ambassador Emma Stone, along with Zhou Dongyu, a most prominent name in contemporary Chinese cinema. Padukone has also appeared in Nicolas Ghesquière’s novel-inspired Pre-Fall 2020 campaign, strengthening her collaborative relationship with the Maison. Deepika Padukone has established a presence in Indian Cinema with over 30 feature films to her credit. In addition to a motley of amazing movies, the actress has notably been named a member of the jury of this year’s 75th Cannes Film Festival and has featured among Time Magazines “100 Most Influential People.” Some of her works left the global audiences floored, including Piku, Padmavat, and most recently, Gehraiyaan.

Ethan James Green shot the LV Dauphine bag campaign. Padukone is seen looking ethereal in white against a backdrop of white and gradient blue. The Dauphine bag looks like an equally beautiful extension of the icon that shares her beauty, free spirit and intent to seize the day. There definitely could be no better woman of substance, success, and jawdropping beauty to represent India in a global campaign.