The monsoon in India brings along a magical effect, it turns the most mundane of the touristy places into picturesque destinations. But there are few places in India that are absolute must-visits during the rainy season, and Coorg for me is one of them. Called the Scotland of India, the misty, lush green hill station in Karnataka becomes simply irresistible for nature lovers. And this made me very excited when we received an invitation from Volvo to try out their V90 Cross Country, not just because of the beauty of the place, but it would serve as the perfect setup to test the car’s all-terrain credentials. 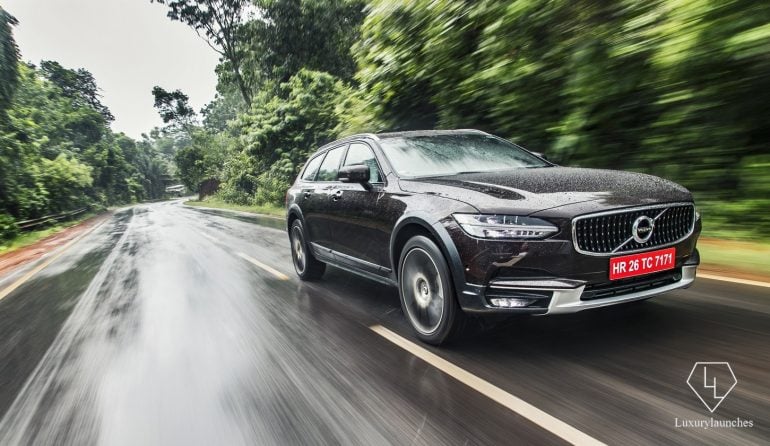 After a long flight to Mangalore – the closest city to Coorg with an airport – the first part of the itinerary was to collect the key to the V90 Cross Country and get the 150-km-long drive to Coorg started. This involved driving through some on the most beautiful hill roads of Southern India. I teamed up with an old friend of mine, who writes on cars for a different publication, loaded the car with all the necessary supplies, and set-off for Coorg. He decided to have a go on the car first, for which I happily agreed as it gave me enough time to have a close look at the interiors and fiddle around with the infotainment system, all the while enjoying the massaging function of the front seat that offers three modes and adjustable speed and intensity.

“…the V90 Cross Country also gets all-wheel drive and really impressive 210mm of ground clearance, and given the condition of our roads, especially in the rains, both the features are very, very important”

The first thing you notice about the cabin is how similar it is to Volvo’s S90 sedan. The dash, switches, the seats, and just about everything looks right out of the S90 – and it’s not a bad thing at all because the S90’s cabin is really, really good. In fact, the people at Volvo said everything in front of the B-pillar on the V90 Cross Country is same as the S90. What the S90 doesn’t get in the enormous 560 litres of stowage space, which increases to 1,526 litres with the rears folded down. In addition to that, the V90 Cross Country also gets all-wheel drive and really impressive 210mm of ground clearance, and given the condition of our roads, especially in the rains, both the features are very, very important.

Coming back to the interior of the Cross Country, the dash has that appealing minimalist design theme. Just about every function of the car can be operated from the big, longitudinally oriented 9-inch touchscreen replacing most physical buttons, including air condition controls. The user interface is self-intuitive and you don’t have to be tech savvy to dig out the settings. The slim air vents on each side of the screen are both functional and aesthetically appealing. Out of all the physical buttons and switches, I love the start-stop knob which needs to be rotated in either direction to operate. But I can’t say the same for the drive-select button that toggles through different driving modes; it’s really silly the way it works. 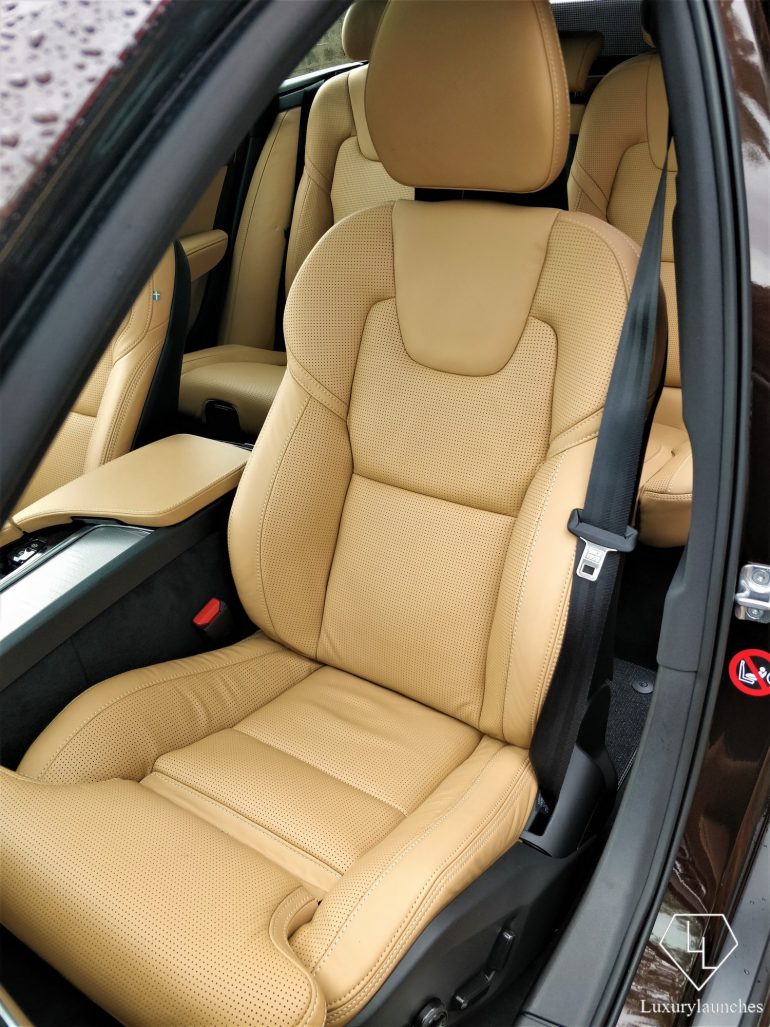 The front seats are ventilated and offer both heating and cooling, which are more useful than they sound. The seats offer electric adjustment for the bolsters, lumbar support and extendable squabs, and are superbly comfortable. No surprises there are Volvo claims all their seats are designed with the help of orthopaedic doctors. The rear seats two, but a third person can fit in the middle that won’t be as comfortable because of the massive transmission tunnel through the middle. I liked the upholstery of the car we tested; the shade of tan leather gave it a sportier look than the boring white or beige coloured interiors we are used to seeing on the cars of its segment. The woven aluminium panel inserts that have replaced the veneer inserts on the doors and dash also go pretty well with the overall theme. But, you can always go for the wooden panel bits if you like, which can be had as an option – the only optional extra you can ask for on the car in fact thanks to Volvo’s top-down strategy, everything else comes as standard. The V90 CC comes packed with top of the line features that include a big panoramic sunroof, a incredible 19 speakers, 1,400 watt Bowers and Wilkins sound system, an electric tailgate, a head-up display, and four-zone climate control. 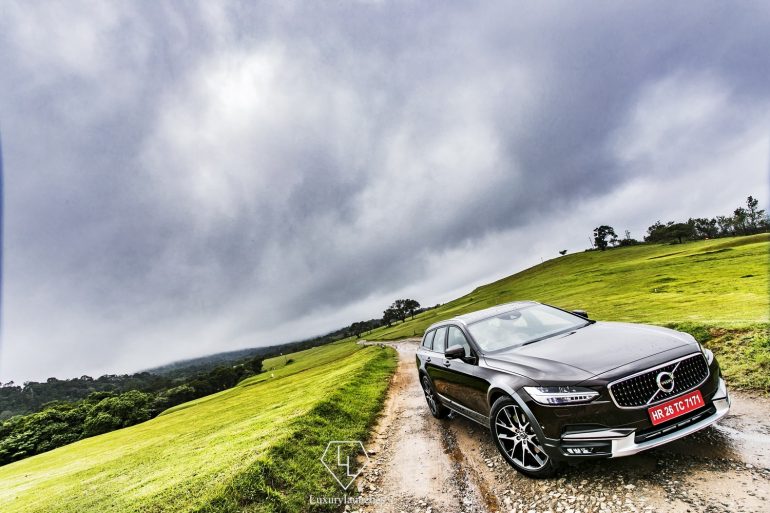 “Technically, the V90 CC is a station wagon, which shares its underpinnings with the XC90 and has better ground clearance than most of the crossovers and many SUVs”

After a few kilometres, I jumped into the driver’s seat and took control of the steering – which is also vented like the seats. Technically, the V90 CC is a station wagon, which shares its underpinnings with the XC90 and has better ground clearance than most of the crossovers and many SUVs. Powered by the carmaker’s D5 diesel unit, the car gets 235hp and 480Nm of peak torque. That’s quite a bit more than the S90 which has 190hp at its disposal. The engine is mated to a ZF 8-speed gearbox that sends the power to a front-biased all-wheel drive system. The gearbox is a little slow to react and even with the manual mode in the Dynamic riding mode and changing gears with the paddle shifters on the steering wheel, the gear changes are not fast enough. 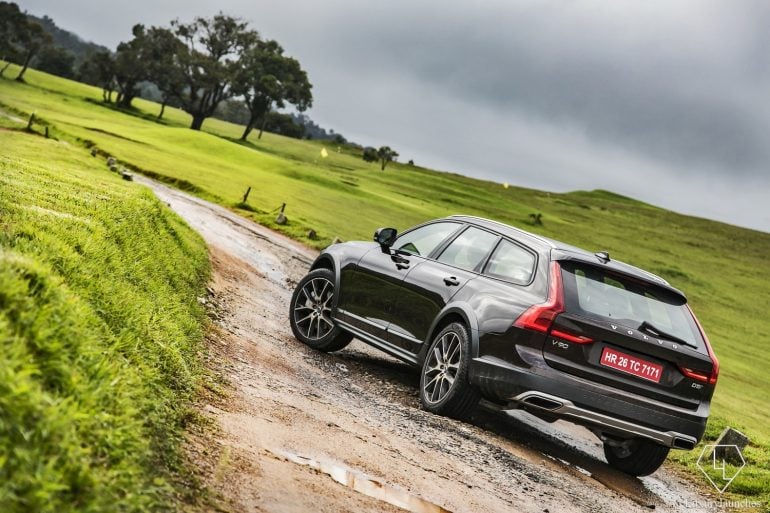 The twin-turbo D5 engine comes with Volvo’s PowerPulse technology that sends compressed air into the turbo to spool it up quicker when the driver demands sudden acceleration from low revs. The clever anti-lag system technically should remove any kind of turbo lag from the car. But it was effectively my only major gripe with the V90 CC. The car still felt laggy, even in the dynamic mode, and rather had a very ill effect on the power delivery which was very unpredictable and abrupt. But what I loved about the car was its driving dynamics. The massive 20-inch wheels come with the amazing Pirelli P-Zero tyres in India. Combine that with great suspension setup and precise steering and what you get is a 2.4 tonne crossover that drives like a hatchback. 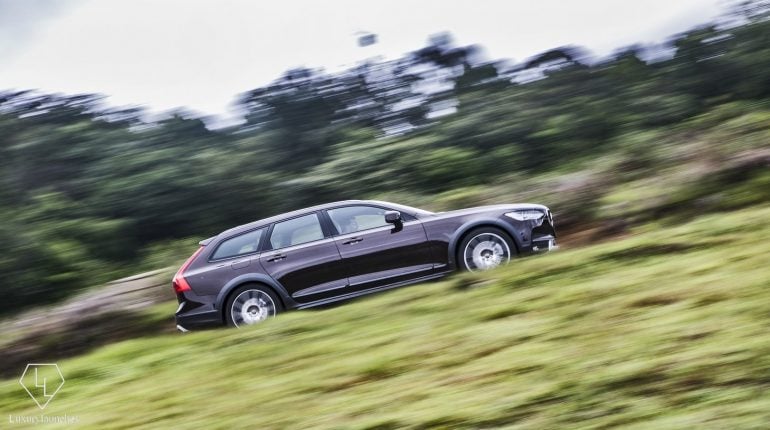 “…if you want a car that gives you the creature comforts and relaxed seating position of a luxury sedan and the ground clearance and off-roading capabilities of a potent crossover, the V90 CC is for you”

Driving the V90 CC on the hill roads to Coorg was fantastic. There are very car with that much weight and ground clearance that’s so much fun to drive on twisty hill roads. In total, we drove the Cross Country for 300km, but I wish I had more time to test the car’s capabilities. With the V90 CC, Volvo has opened a new niche in the Indian market. Should you buy one? Well, if you want a car that gives you the creature comforts and relaxed seating position of a luxury sedan and the ground clearance and off-roading capabilities of a potent crossover, the V90 CC is for you. And not to forget that it looks brilliant from the outside. The Thor’s hammer headlights; the low slung design; the sharp windscreen rake; the stunning alloy wheels – the Volvo V90 Cross Country is one heck of a good looking car. And with a starting price of Rs. 60 lakhs, I won’t be surprised if people choose the V90 CC over the S90 sedan and XC90 SUV – because it simply makes more sense.