What would you say about having the heart of Thailand’s culture, right at one of Bombay’s classiest 5-star hotels? Yes, I’m talking about a Thai Street Food Festival at JW Marriot Sahar. The JW Café had Chef Rungtiwa Sorlae in the spotlight for the entire 11-day festival, which began on 22nd July and ends on 1st August. 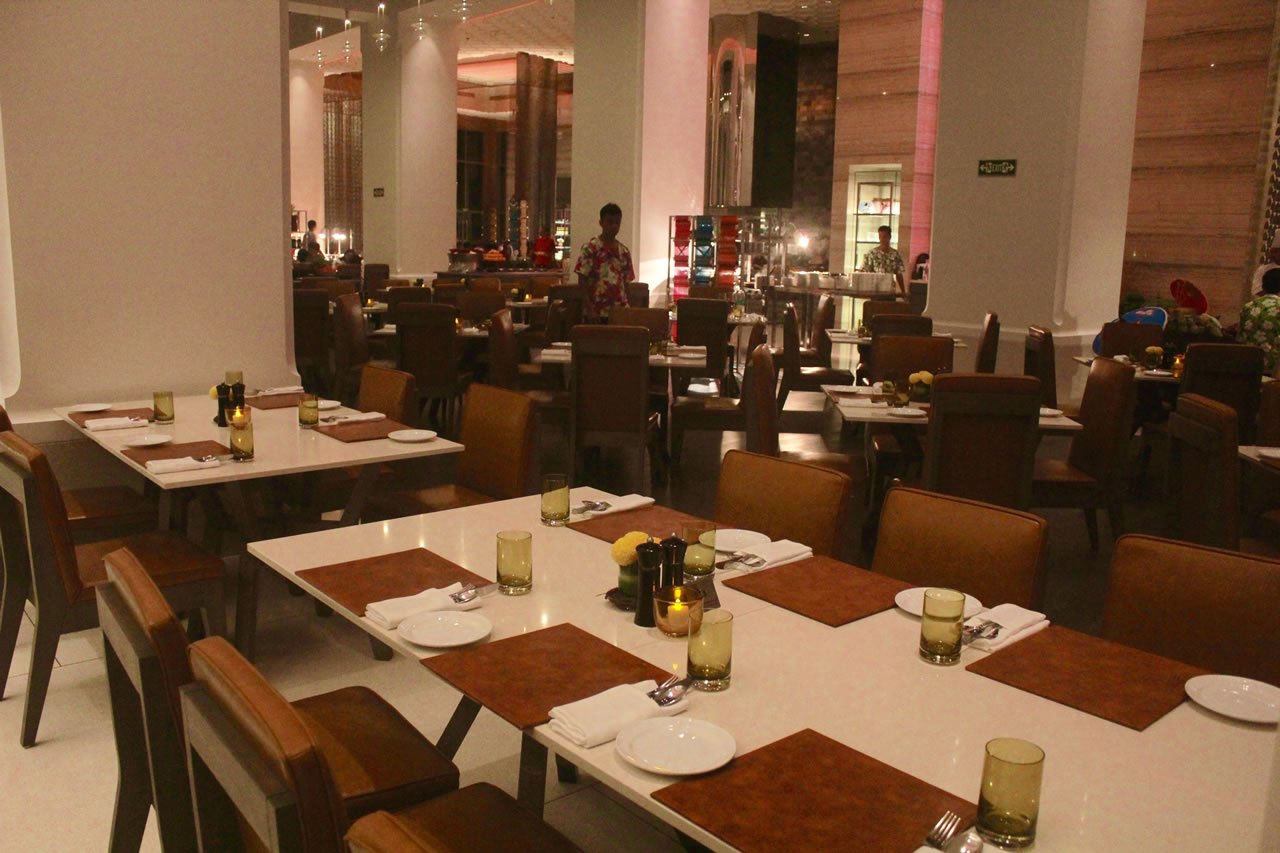 If anyone has been to the JW Café, they’ll know that it is not really set up in true café style, which is great! The JW Café is spacious and huge with plenty of seating and also brightly lit. The décor is pretty minimalistic with a combination of white tabletops and dark tan colored chairs and place mats. There is hardly any other detailing except for the metal mesh curtains that hang from the high ceiling top. The right side of the entrance also has a bell-linked curtain like installment, though its noticeable only if you have time to stroll around and take a good look. The buffet is divided in to sections with different cuisines. We did like the glass bauble-like hangings over the dessert section (which obviously took us a while to notice because we were drooling over the sheer variety of confectionery); the light reflecting off the baubles gave a magical starlight effect. 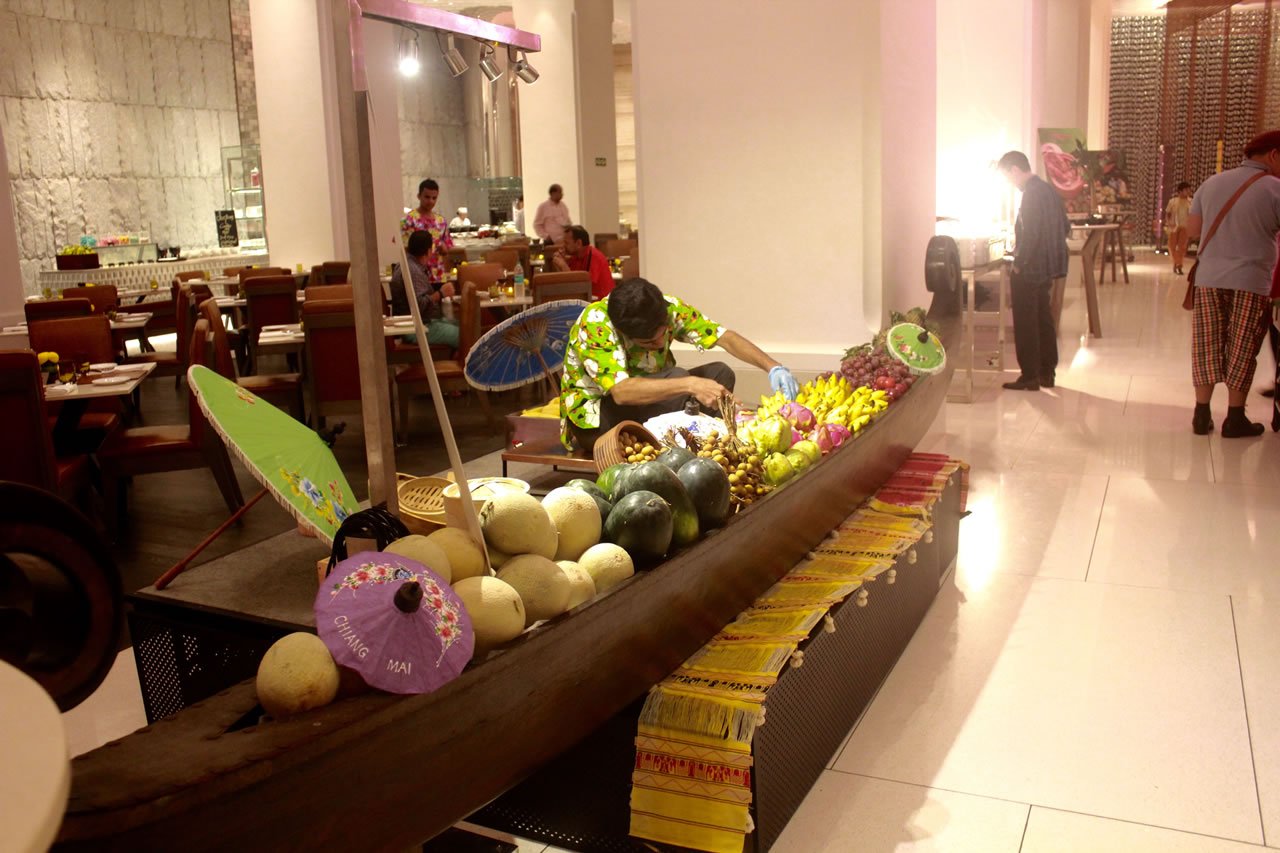 For the Thai street food, they did amp up the buffet a bit. A big boat stall, the likes of which one would find at Bangkok’s touristy floating markets, filled with a variety of fresh fruit, was the first thing that caught our eye as we enetered. Anything you wanted would be cut and served to you – from watermelons, to grapes, to pineapples and even dragon fruits! The spread looked so exotic, it made us forget that we had a whole course ahead of us, before we could come to the fruits. As we moved on, we saw that they had a special table just for the Som Tum, the famous raw papaya salad. There were also separate tables setup for the noodle soup and the curries. The Satay/Sate section along with adjoining buffet sections, were decorated with a bowls of fresh vegetables to give the spread a really colorful look.

Now on to the reason we’re writing this review in the first place! 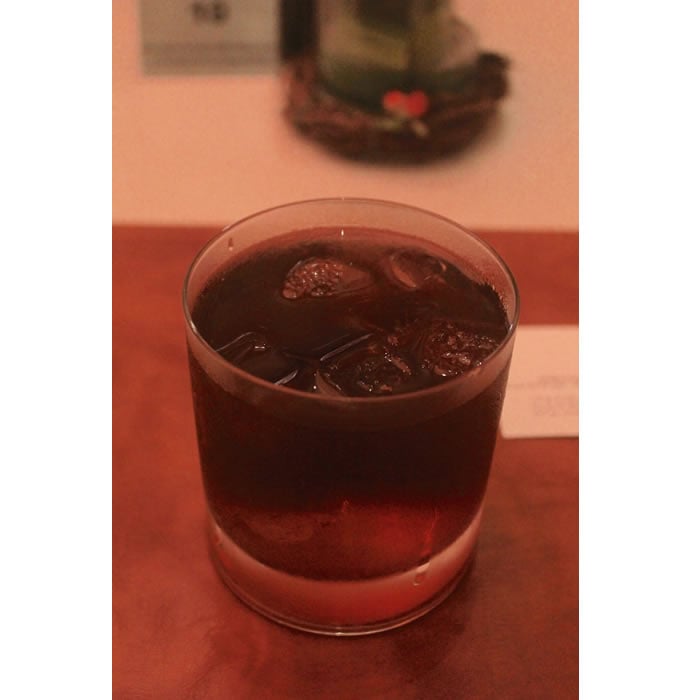 We were welcomed with a drink specially created for the Thai festival – Thai Tea/Thai Iced Tea. This refreshing dark drink is nothing like we imagined it to be, it was sweet and floral. Chef Rungtiwa came over to greet us soon after and when asked about what gave it its flavor, she said it was a secret! I, particularly, was most tempted to look it up, but then that might ruin the mystery around it. Some secrets are best left to their masters. All we know is that it was strongly brewed Ceylon tea leaves mixed with some sweet ingredient x and it was good. Even though the chef was pretty tight-lipped about the ingredients, she was extremely sweet enough to get us some of the actually tea leaves to give us an idea; and boy did it smell good! 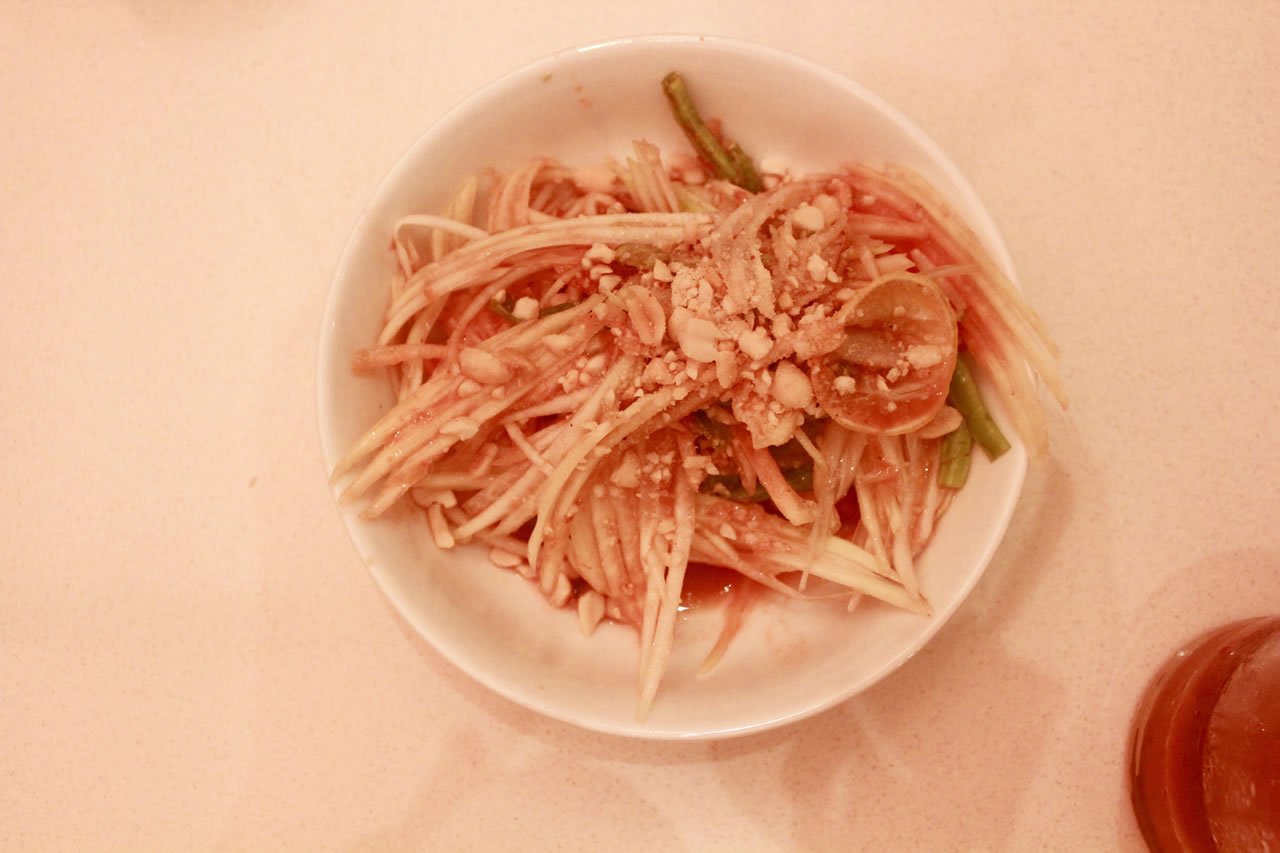 On her recommendations, we got the Som Tum for starters, prepared by her (of course!) and a warm bowl of Khao Soi! The salad was all vegetarian, crunchy and sweet-sour at first, but after you chew into it a bit, the Thai chilies work their magic! The spice is might be unbearable for some but for us, it was exciting! We got a bowl full to split between two people but if you’re not one for the spice but still want to try it, it would make sense to request a smaller portion. The Khao Soi, which is the northern Thai variation of the Burmese dish Khau Suey/ Ohn no khau swè, a thick coconut curry with noodles, was warm and coconut-y as expected and with undertones of it being a bit sweet. But we were later told that, it was made moderately spicy which is probably why we could taste a lot of the coconut milk’s sweetness. We got ours with boiled egg and chicken, but at the station where it was being made, you could choose what ever you wanted to add, from corn, carrots, mushroom and even prawns. I think its safe to say, when it comes to Thai food, unless you’re used to a high level of pungency, medium spice is the way to go! 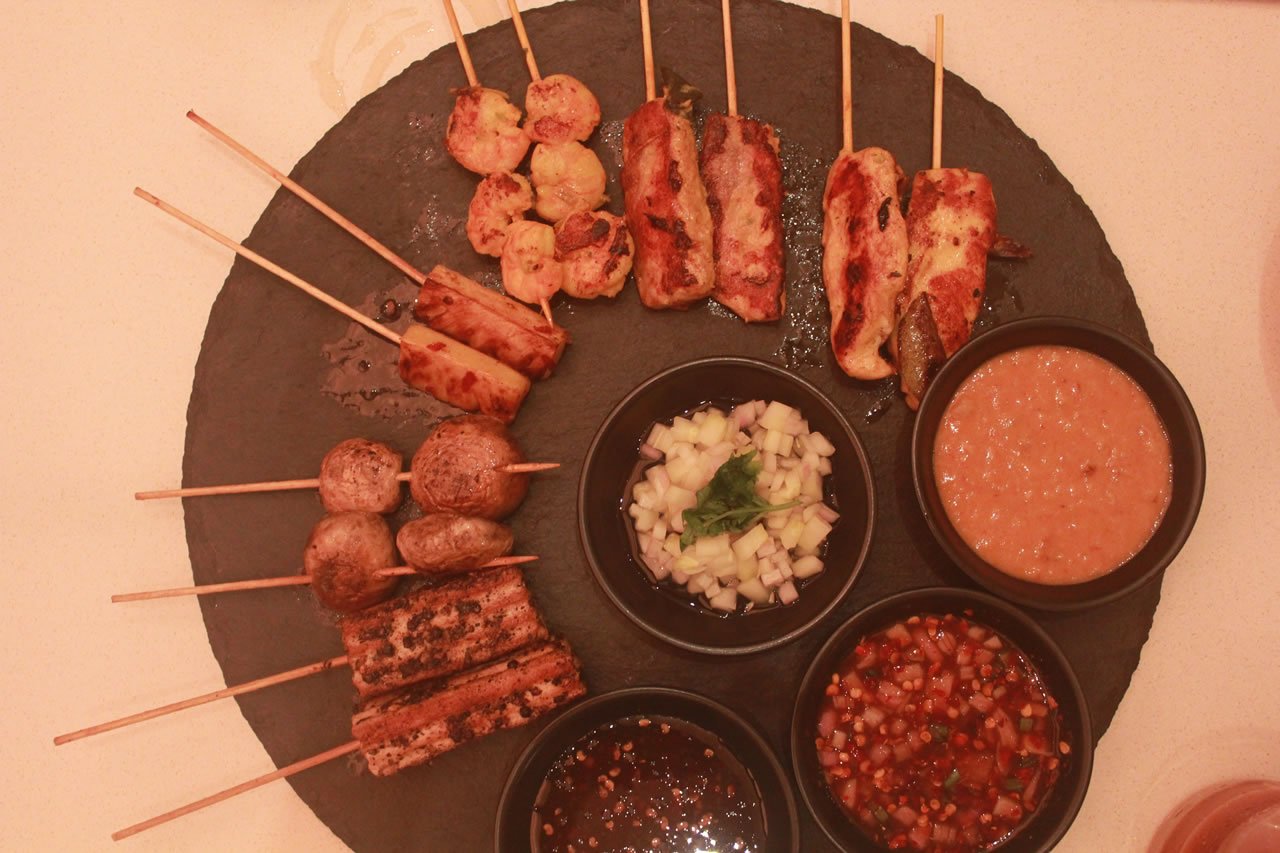 For our next course, we ordered the Satays and got two of everything. There were mushrooms, pineapple and pepper tofu for the vegetarians and fish fillet, chicken and prawns for the non-vegetarians. The fish and chicken had a strong flavoring of the kaffir lime, though the fish was a better match. The prawn tasted like a good marinade, though nothing special. The pineapple and mushrooms too were plainly okay. The tofu however was surprisingly delightful, and this coming from meat eaters, is saying something! The pepper gave the bland insides a textured smoky flavor that was enjoyable. I’m sad to say that the Satay overall did not leave a last impression. 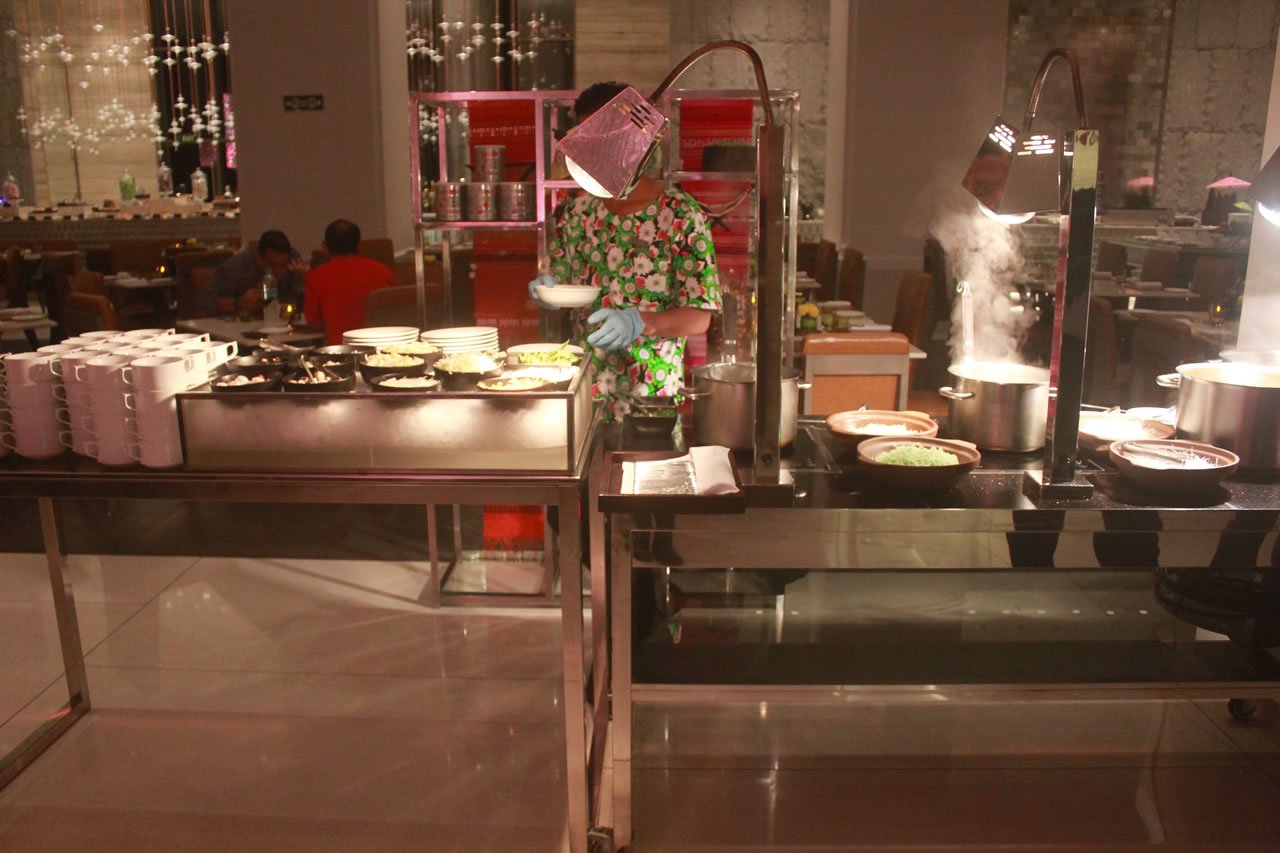 For our last meal before we hit the desserts, for which we were saving up space, we decided to try the noodle soup. At the station, we had two options to choose from, the Tom Yum and a Clear Soup. Since we were two, we decided to get both. We paired the Tom Yum with fresh clams and prawns, bean sprouts and a little bit of everything else and some glass noodles; while the clear soup just had fish balls and some cabbage and mushrooms and spinach noodles. Our verdict is that if given a chance, always choose the clear soup because it goes well with every ingredient that you put in. It’s the epitome of everything salty, warm and light, perfect for every season. The Tom Yum, was good too, but just a lot of flavor in one bowl, not in a very satisfying way. On a side note, the green spinach noodles also look aesthetically pleasing in the clear soup. 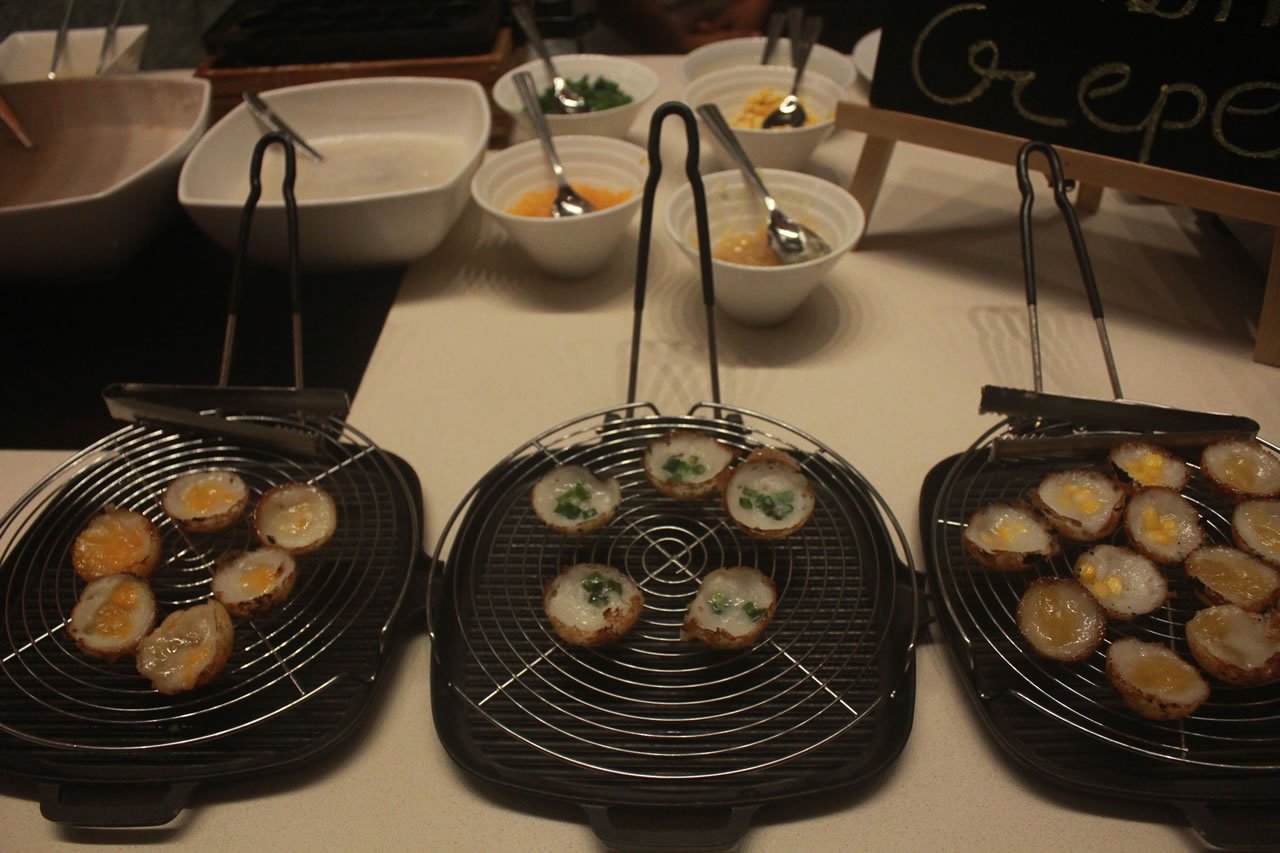 The dessert section was on the back of our minds ever since we saw it at the start and as soon as we were done, we felt our selves gravitating towards it without realizing. At this point, it was a choice between fresh healthy fruits and sugar filled goodness and obviously, we chose the latter. The dessert section had a Thai specialty that was part of the festival – Thai pancakes. Everything you know about how pancakes should be must be forgotten when trying these one of a kind traditional desserts. Unlike American or European pancakes, these are in the shape of small cups, made out of coconut milk and rice flour. The outer combination is kind of sweet and very pudding-like but it’s the filling that may be strange especially if you try one that has spring onions or corn. We’re still not sure if we like our desserts to be savory but it was a good experience. We were glad that they also had two that had a peach, and one that had a pineapple filling. Besides that, we stocked up on a Lemon Meringue Sable, Dark Chocolate Rice Crispies, New York Cheese Slice and a Plum Frangipani Tart, because that’s all that our stomachs could take. The Lemon Meringue was cream and tart based pastry, that lacked its traditional lemon kick. The New York Cheese slice however, packed in a good punch. The plum tart tasted more like a pie, though we loved the sweet, jam like texture it had, so we’re not complaining. The dark chocolate rice crispies were wafer like and the unsweetened dark chocolate acted like a good palate cleaners. 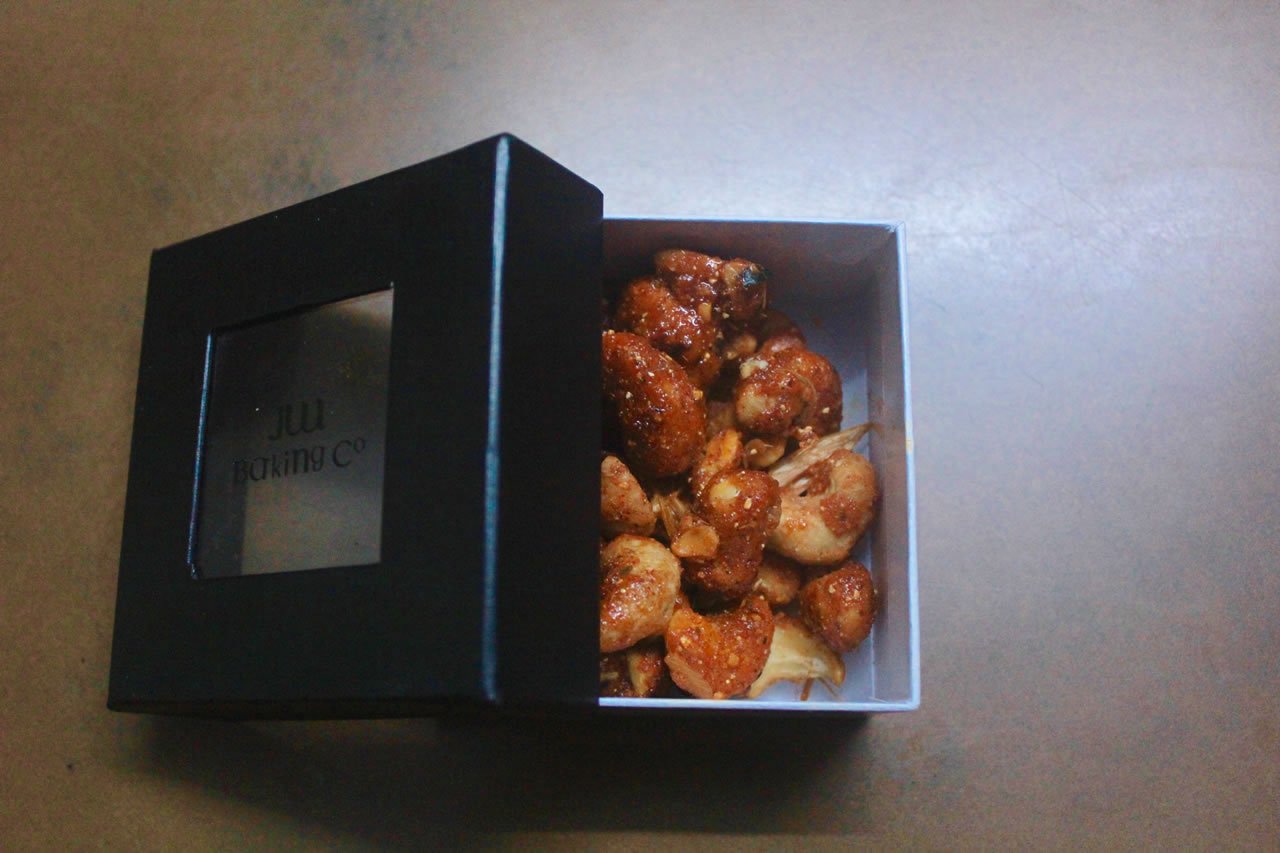 We were almost ready to leave, when Chef Rungtiwa came out with a little gift for us – a box of Tom Yum coated cashew nuts made the chef herself. We were so pleased and delighted by the gesture that we had to try it there and then; and my, were we impressed with the salty-spicy flavor of the nuts. We definitely need to find a way to get our hands on more of that!

Overall, the food was good, though we’re not sure if the soup and curry section was very much ‘street food’ but I guess it made sense to make a more wholesome meal out of it. We also didn’t think the atmosphere was quite ‘there’ too, but I guess they worked with what they had. We especially liked the Khao Soi and the clear soup the most. The papaya salad won brownie points too, though we’re not sure if our stomachs could handle that level of spice on a regular basis. The desserts floored us, and the Thai pancakes were definitely a new try for us and would recommend that to anyone just for the experience. However, having never been to Thailand ourselves, we can’t help but wonder if this would be the actual representation of the real thing. But I think we trusted JW Café’s in-house Thai specialty Chef Rungtiwa to at least give us a glimpse.