Design is probably the most important factor in deciding, well, anything. Would you have a mobile phone which looks ugly but has a zillion megapixels or an OS that would make a teenager blush? No, I assume and it is even more so with cars. I mean you would be better off walking instead of even looking at a Pontiac Aztek (google it, though viewer discretion is advised). This is not a Pontiac Aztek. This is the new Range Rover Velar. An SUV so pretty, that it makes every other iteration of its ilk seem ugly. A genius design where the ‘less is more’ mantra is applied. 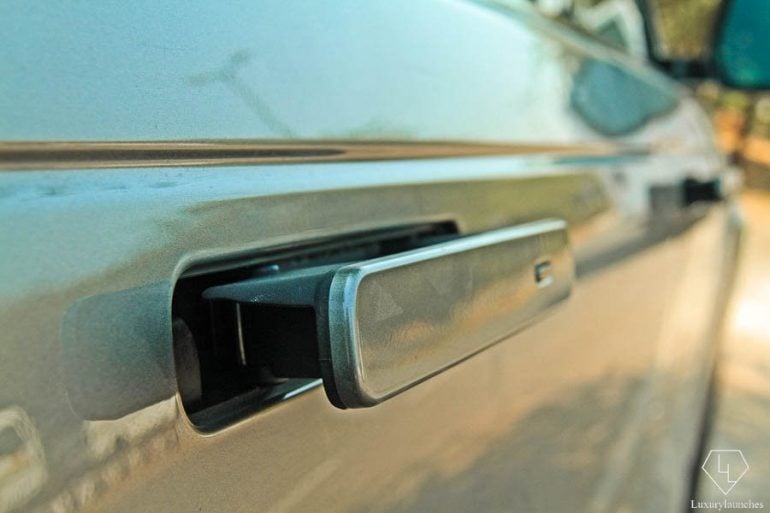 The door handles, for example, are hidden so as to not mess up the lines, the face is chiselled, the surfacing clean and overall it is just devoid of any clutter. The face is handsome and the Velar marries all the good bits of its family members but in a more ground-hugging avatar. It is low slung and does not have the upright, Buckingham Palace on wheels stance of the Range Rover or even the ‘Prince Harry on a night out’ look which the Evoque has. The Velar is somewhere in between and is just a jaw-dropping piece of art on wheels. Never thought I would say that regarding an SUV…

The roofline is low, the rear is droopy but I kid you not, you will not find a single bad angle on the design. Ok, maybe the wheel on our mid-spec petrol test car is a bit too small but that’s a minor blemish on an otherwise stunning car. 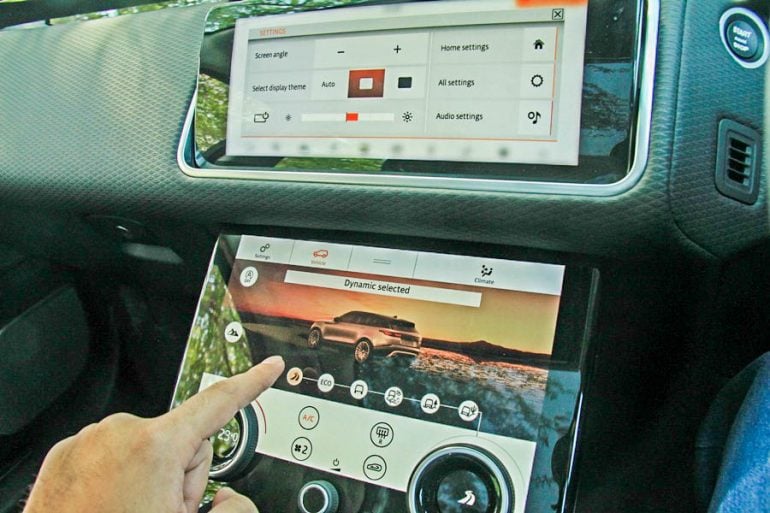 Inside the same clean and minimalistic design is applied and the result is just as stunning. Land Rover folks have tried hard and removed as many buttons and knobs as much as possible, replacing them with screens. Nothing here is old school and everywhere digital has replaced analogue. The dials are a virtual TFT affair but your eyes gaze to the center where there is two massive 10-inch high-def screens which Land Rover calls as the ‘Touch Pro Duo’. 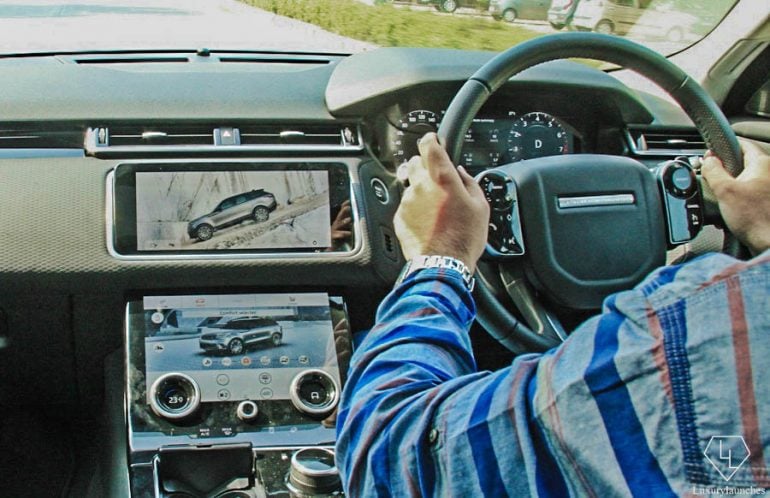 Both screens have nearly all the functions neatly divided and frankly, I am yet to use a touchscreen which is so slick or even sees a display which is just so amazing to see. The display and the various functions will mean your inner 17-year-old geek will be born and you can never stop fiddling around. Yes it is a fingerprint magnet but the other amazing bit is that the top screen can be tilted by 30 degrees or even how the whole system is so easy to use. 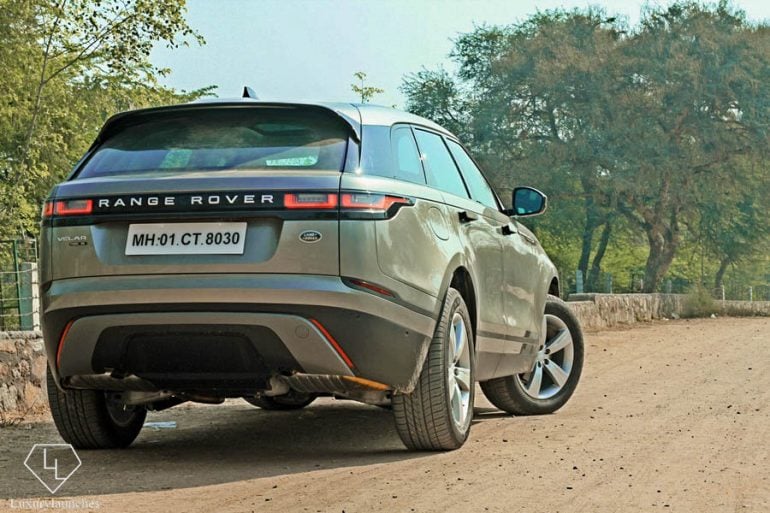 I was so much in awe that I forgot how comfortable the seats where or just how well everything feels screwed together. Quality, design, tech- this is an incredible cabin. Hats off, Land Rover. Plus do not worry as the all-important rear seat is not bad and no, headroom is not sacrificed at the altar of style. 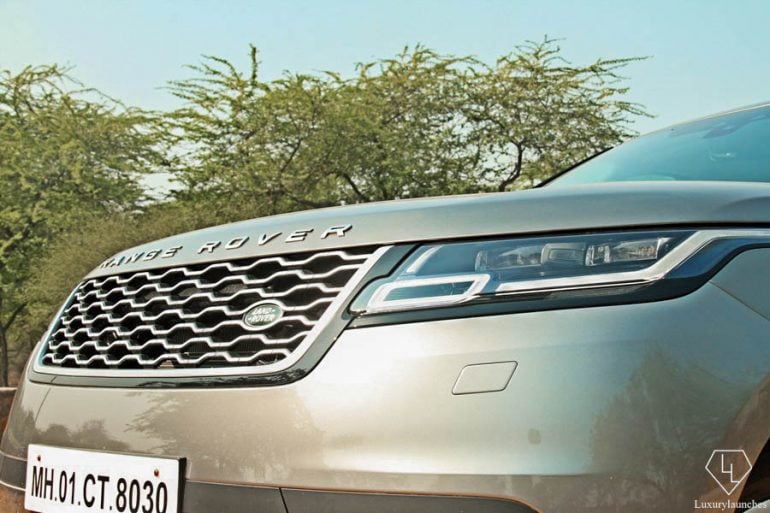 As you might expect it’s fitted with every gizmo possible. Notable mentions include the superb Meridian audio system, powered seats, panoramic sunroof, all round 360 degree cameras. Do note this is not the top-end version.

On to the driving bit and here the Velar is powered by a petrol which is de rigueur in today’s SUV world. Diesel is passé. The engine in question is a 2.0 four-cylinder motor with 250 bhp and 365Nm. Do not be fooled by the engine size as it has got plenty of oomph. Power delivery is smooth and the engine is very tractable at low speeds which makes for hushed progress. Plus there is no diesel drone too as refinement is akin to an eerie silence.

However, when you push hard and hook up the 8-speed auto and the car set to its sportiest setting, the engine lets out a muted snarl and it does push forward with impressive momentum. Yes, the acceleration is not as savage as the SVR obviously or even like the surge of a 3.0 diesel but it is a well-oiled powertrain with good performance and I would you say use-able one at that. 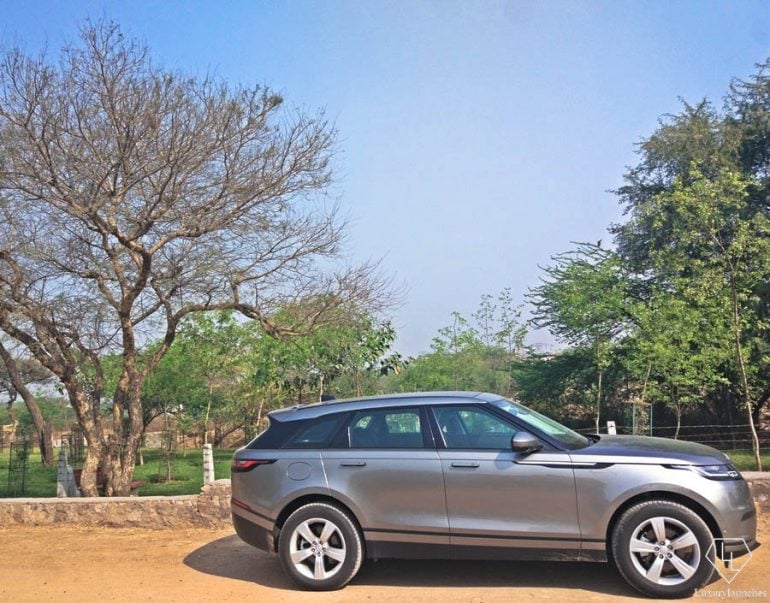 Now the Velar is certainly the most fun Land Rover I have driven is the agilest. Yet somehow it still maintains the grace and maturity of a Land Rover. There is a fine line carved here. It is not an outright ‘sports car on stilts’ like the Porsche Cayenne but it is more relaxing yet can be hustled when in the mood. The steering though is lovely and just filters in the perfect amount of feedback yet being light to use too. I did not venture off-road but the Velar does retain the basic DNA which means it will cope with almost anything you can throw at it.

Here is the clincher though. The Velar range starts at Rs 80 lakh which is a mouthwatering price when you consider the looks, the interiors or even the overall driving dynamics. It just looks and feels special which makes the price worth it. This is possibly the most desirable and also the best value offering in the Land Rover stable. Rivals are either too boring or too stiff for everyday use which is where the Velar carves a niche all to itself. And when you buy one you can park one in your living room and just stare at it…