Think ‘Volvo’ and the first thing that comes to my mind is safety, the Swede car manufacturer has been synonymous for making safe cars that others swear by. Take a good look at the car above, can this company be just about safety? Definitely not, we spent a couple of days with its premium hatchback the V40 Cross Country and realised that it is exciting, luxurious and refreshingly different.

The Volvo V40 Cross Country has a very aggressive stance which is highlighted further by the massive smoked headlamps and the badged black grille. Accented by the black bumper are the DRL’s which replace the fog lamps. The wavy tail-lamps, the large spoiler and the dual chrome tipped exhausts make the rear even more exciting and sporty. We had not got behind the wheels yet, and we knew this was not your normal luxury hatchback. 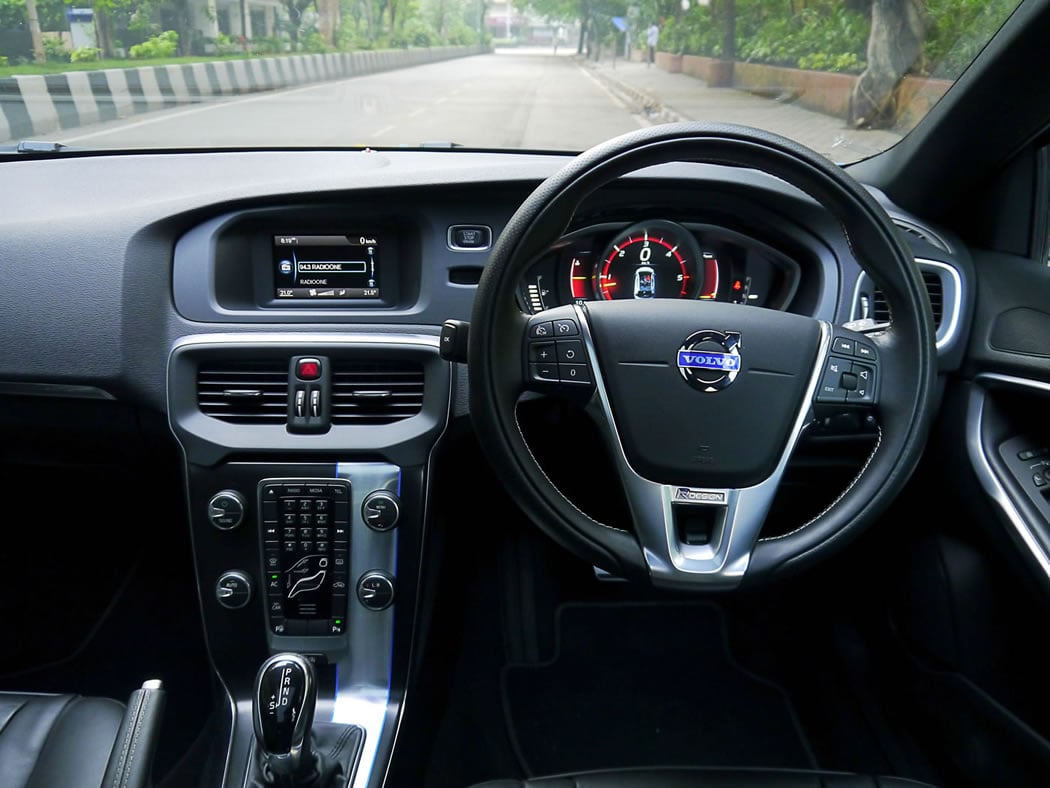 The sporty characteristics are very much evident on the inside as well, you have plush black themed interiors and inviting leather seats. A pleasant surprise for a car in this segment are the driver and passenger seats which are power assisted and come with memory function. One thing I loved was the digital instrument cluster which lights up with the R-Design insignia and completely changes as per the selected driving mode, more on those later. Being Volvo the infotainment system is not controlled by a touchscreen, jog wheel or a touchpad but by buttons. Yes, you have buttons for each and every function, initially it may look a bit overwhelming but in a matter of time you realize that it is intuitive and easy to juggle without taking the eyes off the road. Media playback via Bluetooth and USB, and the music is pumped through eight quality speakers. Sitting at the top of the floating dash controls is the display, measuring just 5 inches across it is a bit bigger than an iPhone and unfortunately the only thing that feels out of sync in the otherwise lush interiors. Navigation and rear parking camera are optional but the car comes standard with parking sensors in the front, back and the sides.

The rear seats comfortably seat two adults, and the otherwise roomy cabin appears even more spacious by toggling the electric panoramic roof. The dual zone air-conditioning perfectly tames even the hot and humid Mumbai weather but with the lack of rear AC vents it takes some time for the cooled filtered air to dissipate into the rear cabin. Speaking of tropical weather the car can be remotely started with the keyfob, keeping in mind the black leather interiors it can be a huge boon if you have parked in the open on a sunny day. 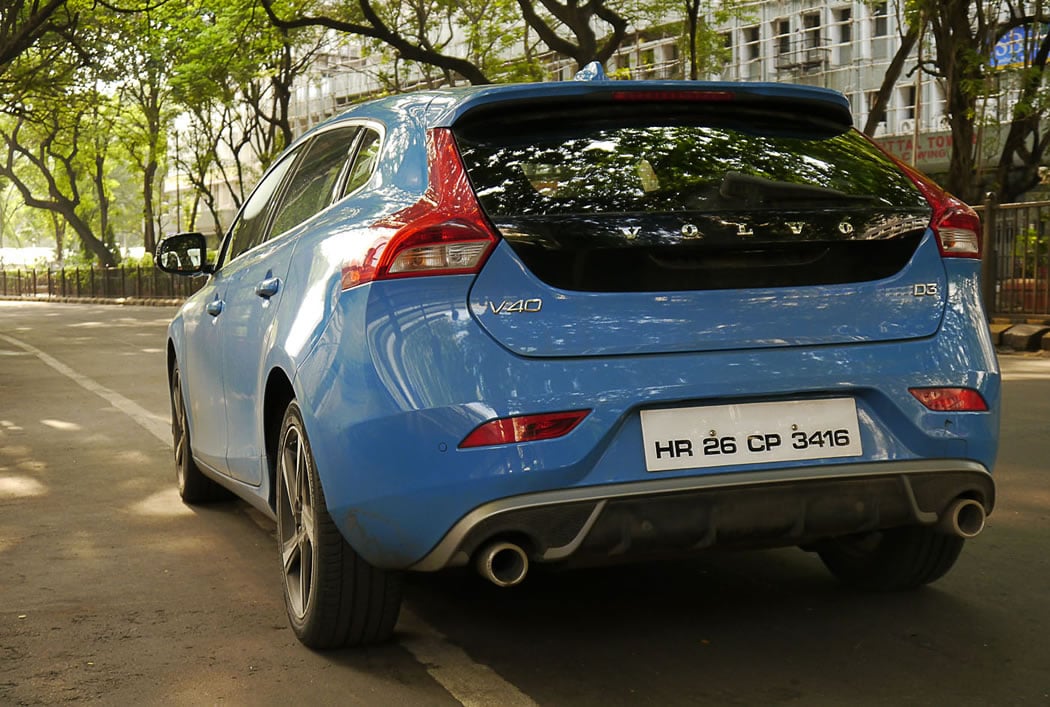 The Volvo V40 Cross Country is available in petrol and diesel variants in India, our test car was ‘D3 R-Design’ the top Diesel trim. Under the hood is a 2 liter, 5-cylinder, in-line Turbo-Diesel that churns out 150 hp and 350 nM of torque to the front wheels. The engine is paired to 6 speed automatic transmission and according to Volvo the car reaches 100 km/hr from a standstill in 9.3 seconds. The refined engine and the slippery gearbox translate into a smooth drive, though there are no noticeable vibrations, when idling the engine is a bit vocal in the cabin. 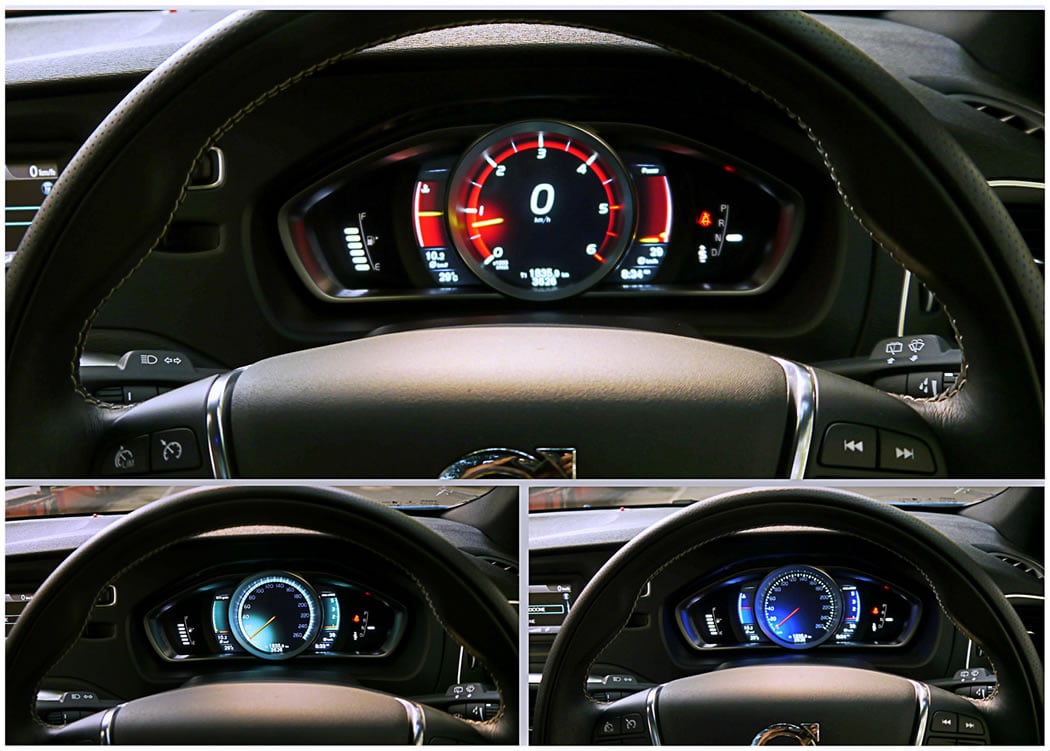 Letting you tame the engine are three driving modes Elegance, Eco and Performance which change the gearbox, throttle response and the bright instrument cluster accordingly. Elegance mode is the way Volvo wants you to drive the V40 Cross Country. Despite having the highest torque in its class, it is extremely easy to drive in peak city traffic and with the surge of torque once the tacho hits the 1500 RPM mark overtaking is easy and loads of fun. Eco-Mode tones down the engine and throttle a bit and helps you save fuel and mother earth, but unlike the competition it does not compromise on performance severely and still translates into a fun urban driving experience. An auto Start-stop kicks in both the modes, the engine is so well insulated from the body that it is only from the sound that you know that the engine has kicked off to life.

Switch to Performance mode and the subtle blue and green dials turn into fiery red while displaying the speed in clear big digits. Perhaps even the engine becomes red with anger, more responsive would be an understatement as the engine actually becomes very agile, holding on to the revs as the surge of torque brings a grin on your face. Slide the gear selector and you activate the sports mode, pushing the pedal down the acceleration was such that it made me wonder does this car really pack 150 horses if so then what kind of steroid fed horses are they? Something we truly miss in the sport mode are the paddle shifters. Although the ride is enjoyable because of the 6 speed gearbox the gearshifts are snappy, making it a bit too jumpy for regular urban use and is best left for open roads.

The V40 Cross Country is well planted with the steering offering decent feedback. Considering that she is the heaviest in the segment with a kerb weight of 1.5 tonnes, it is impressive how the car handles with such minimal body roll. 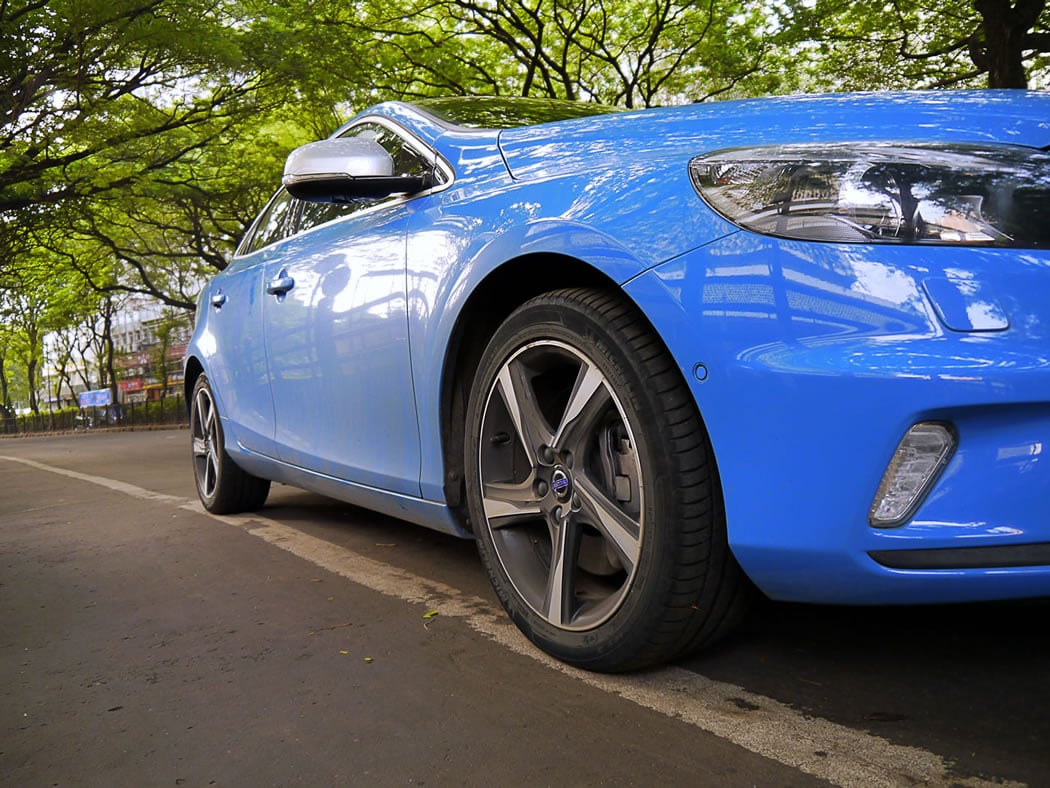 The 17 inch wheels multiply the sporty stance of the car when looked from the side, but then they have their caveat as well. When thin tyres are paired with the car’s ill tuned suspension and a stiff chassis each and any irregularity in the road is not only registered but also amplified in the cabin making a bumpy road even bumpier. With a low ground clearance speed breakers need to be driven on diagonally to prevent the underbelly from scathing.

Here is some trivia – Did you know that Volvo invented the three point seat belt way back in 1959 and instead of patenting and cashing on it , it gave away the most important safety device ever invented for free. The result – according to Volvo this single device has saved more than a million lives.

Here is another piece of trivia – Did you know that the Volvo V40 Cross Country that comes with a pedestrian airbag. A complex system that uses seven sensors in the front to detect if the car has collided with a human, following which pyro charges disengage the bonnet hinges after which an airbag inflates raising its height by 10 cms. The airbag covers the lower edge of the windscreen and the A pillars thus cushioning the parts which cause the most serious head injuries. This intricate system operates in a matter of milliseconds and according to the company it can reduce pedestrian fatalities by 5%. A huge number considering India has the highest number of road fatalities in the world. Surprisingly not even the bank breaking flagship German and Brit sedans have this, a feature that is standard in a Volvo hatchback. Its no surprise that Volvo cars top the most stringent of safety tests. 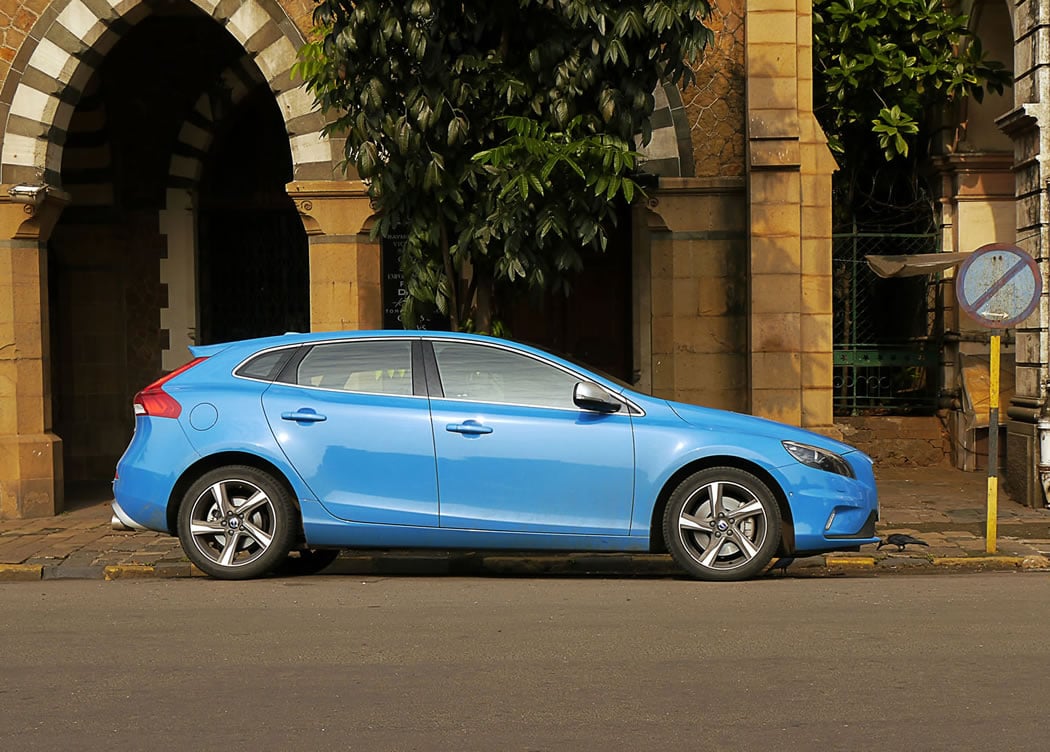 Keeping the passengers safe is – 7 airbags, traction control, ABS, EBD, Emergency Brake assist and the novel ‘City Safe’ feature which scans the road ahead with a laser sensor and automatically brakes the car if the driver does not respond to an unavoidable collision. Aiding the driver you have – Active headlamps, rain sensing wipers, DRL’s and parking assist that automatically steers the car into a parking spot with the driver just having to use the accelerator and brakes. For those weekend family trips the V40 has a spacious 320 liter boot. 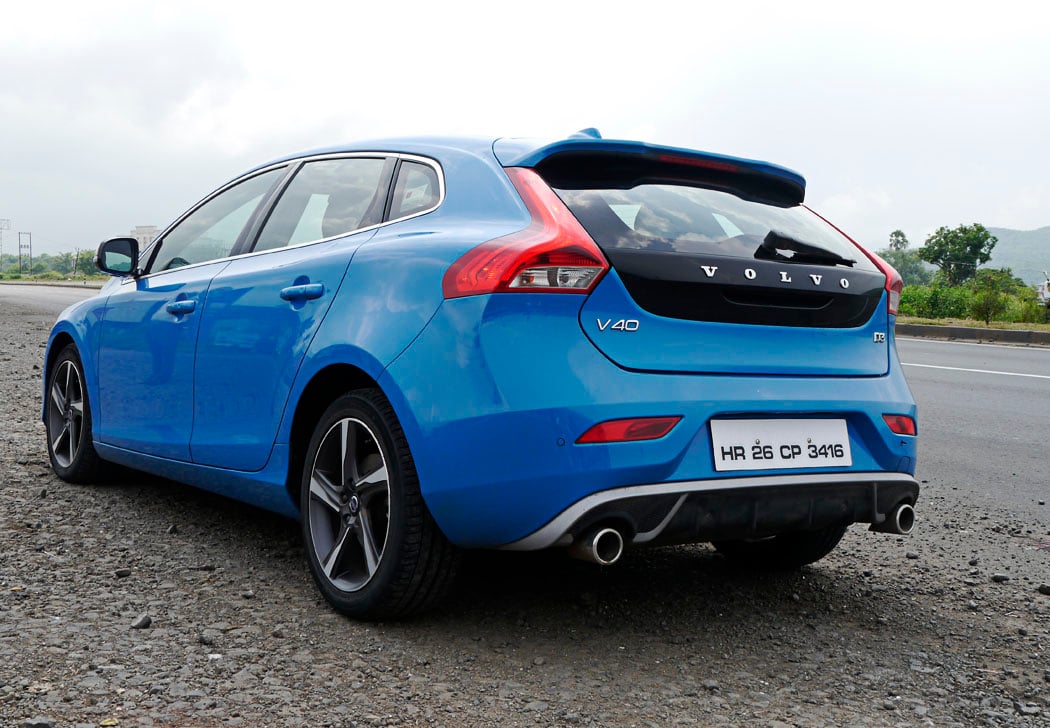 In a segment dominated once again by the Germans the Volvo V40 Cross Country is a refreshing change. The car is solid built, is safer than the safest and is extremely fun to drive. The aggressive stance and sporty looks along with a potent performance is something truly unique in the segment. In terms of shortcomings it is just the ride quality but there is a lot on offer that easily over balances that. If you are in the market for a powerful hatch with a luxury appeal then the V40 Cross Country is for you.